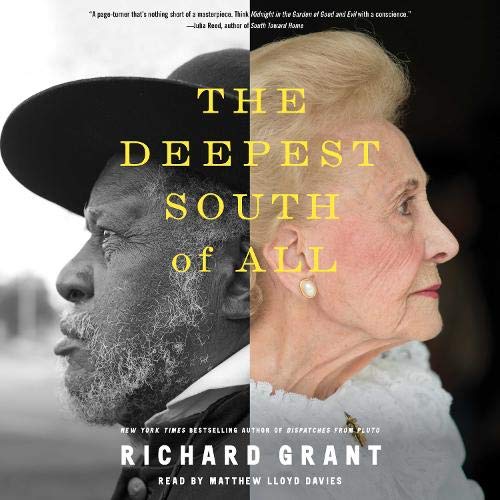 Deepest South of All

Best-selling travel writer Richard Grant offers an entertaining and profound look at a city like no other.

Natchez, Mississippi, once had more millionaires per capita than anywhere else in America, and its wealth was built on slavery and cotton. Today it has the greatest concentration of antebellum mansions in the South and a culture full of unexpected contradictions. Prominent White families dress up in hoopskirts and Confederate uniforms for ritual celebrations of the Old South, yet Natchez is also progressive enough to elect a gay Black man for mayor with 91 percent of the vote.

Much as John Berendt did for Savannah in Midnight in the Garden of Good and Evil and the hit podcast S-Town did for Woodstock, Alabama, so Richard Grant does for Natchez in The Deepest South of All. With humor and insight, he depicts a strange, eccentric town with an unforgettable cast of characters. There’s Buzz Harper, a six-foot-five gay antique dealer famous for swanning around in a mink coat with a uniformed manservant and a very short German bodybuilder. There’s Ginger Hyland, “The Lioness”, who owns 500 antique eyewash cups and decorates 168 Christmas trees with her jewelry collection. And there’s Nellie Jackson, a Cadillac-driving brothel madam who became an FBI informant about the KKK before being burned alive by one of her customers. Interwoven through these stories is the more somber and largely forgotten account of Abd al Rahman Ibrahima, a West African prince who was enslaved in Natchez and became a cause célèbre in the 1820s, eventually gaining his freedom and returning to Africa.

Part history and part travelogue, The Deepest South of All offers a gripping portrait of a complex American place, as it struggles to break free from the past and confront the legacy of slavery.

What listeners say about Deepest South of All

I am a big fan of this author’s work and enjoy learning about strange and foreign lands like the Southiest of Southern States - Mississippi.

This book is an enlightening portrait of an iconic and eccentric town juggling the past and present. Somehow, Grant weaves together Garden Club Gossip, school board meetings and Slavery into a worthwhile read and one with some surprising perspectives on Social Justice and discrimation.

I recommend this book to anyone who enjoyed’Dispatches from Pluto’, and/or have an interest in learning more about the Characters, customs, and lifestyle of
the Deep South.

I HATE THIS BOOK

It is & insult to my enslaved ancestors. White people & their entitlement. I cannot in good conscience recommend this book.

Took me about 4 months to get through this. Seemed to drone on and on
Cute at first, but not wort the time.

Keep on studying the South

I grew up in the Delta but the historical slant really made this book more pertinent given the current state of affairs in our country. Excellent!

A book that awakens your sleeping senses and notions. Richard Grant is an unapologetic observer and reporter who, as non judgmental friend, researches and spreads the story before us. If you’re looking for links from the Southern past to present, it’s here.

This listen was so worth it! Grant captures the Old South’s lore, allure, and prescience beautifully. The parallel story of Ibrahima is fascinating. I highly recommend!