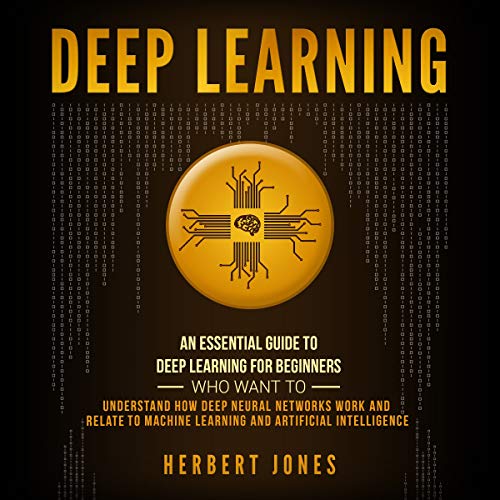 Deep Learning: An Essential Guide to Deep Learning for Beginners Who Want to Understand How Deep Neural Networks Work and Relate to Machine Learning and Artificial Intelligence

Deep Learning: An Essential Guide to Deep Learning for Beginners Who Want to Understand How Deep Neural Networks Work and Relate to Machine Learning and Artificial Intelligence

If you want to learn about Deep Learning then keep reading....

It’s said that filling the observable universe with an infinite number of monkeys on infinite typewriters and letting them type for an infinite amount of time would eventually produce Shakespeare’s works. However, what would happen if we applied the infinite monkey theorem to computer programs capable of learning and evolution? Would a thousand such smart machines thrown together and allowed to evolve undisturbed produce a human mind or something much greater? Well, scientists decided to give it a go and see what happened.

That line of reasoning, alongside the fact we’ve nearly exhausted all the possible progress of the scientific method, motivated the creation of deep learning, a process in which computer programs meant to learn and adapt to the environment evolve on their own without any human intervention or even knowledge how their evolution occurs. Such software could eventually develop a will of its own and escape containment or even be intentionally unleashed on the planet as a cyber-weapon.

This audiobook analyzes the validity of such seemingly preposterous possibilities while compiling and investigating academic research concerning deep learning and its practical applications, referencing, and quick summarizing of numerous academic writings that need to be meticulously picked apart by the curious listener - who can then truly understand what lies ahead of us all in a future dominated by smart machines. If that same listener finds themselves starting up exhaustive conversations with complete strangers on deep learning, this book has done its job superbly. So if you want to learn about Deep Learning without having to go through heavy textbooks, listen to this audiobook now!

What listeners say about Deep Learning: An Essential Guide to Deep Learning for Beginners Who Want to Understand How Deep Neural Networks Work and Relate to Machine Learning and Artificial Intelligence

Its a book of metaphors, and teaches you nothing about deep learning itself. Makes horrible assumptions about human condition and research about them. It shows you the most popular examples of deep learning that you probably already know about.

I am very impressed with this book. In particular, for all my interns, the section on the mathematics (great introduction) and the genetle introductions are helpful

Book is as described

Very useful to have it next to you when you are learning, implementing or using. I was so impressed with the deep learning all portion of this book. I can recommend this work highly enough.

the superb introduction to deep learning in general, easy to understand, even if you don't have a strong mathematical background. A must have this book.

This book has a lot of information about machine learning but no just that also have a good vision of deep learning and a lot of tips.

It’s a really great book of Neural Networks & Deep Learning by Pat Nakamoto. It's a perfect guide for beginners. It makes this book easy and understandable. Each chapter gives full information on the topic

Clearly explained concepts which serve well as a reference but it needs to be complemented with other resources for independent and it would be extremely helpful to include problems and generate ideas during the listening to it.

It explains step by step, using both illustrations and maths, how neural networks are built up and tuned. Excellent audio for anyone interested in the inner workings of neural networks.

Explanation and examples are very thorough and deliver exactly what is needed. Book also has a lot of visual elements to help better understand the details of the topic.

I liked this book very much

This book made my life easier with the proper tips and guides. I am happy I found this book. I found this to be an extremely interesting and mind changing book. Thanks for my best friend for recommending me this book.

- the authors are very good at connecting the dots by explaining why we need to listen given section..

it would be extremely helpful

I am learning the in and out of deep neural networks. The author teaches the chapters in a simple straightforward way. I hope to make a small neural network when I'm finished.

It is more for those who are inclined toward advanced technology and advanced algebra. It is remarkable when you consider that a machine can be taught human knowledge and to solve problems.

Excellent for the following

This book provides a good introduction to deep learning while providing general yet concise details regarding the sub-fields of the topic.

Excessively straightforward anyway it gives us an incredible comprehension. This book makes me significantly make a couple of data examination viably. This is completely the best one.

A very good approach from author

A comprehensive introduction guiding book. Providing some useful info. A very learning approach. It is straightforward and all around detailed. Recommended to all who don't know yet this Deep Learning.

I found this book to have extremely clear explanations of the ML for newbies. It's conceptually well structured, probably because the author has extensive experience teaching this topic.

I would recommend this book for someone who is interested in exploring more about neural networks and wants to start off with a background and resources to explore further.