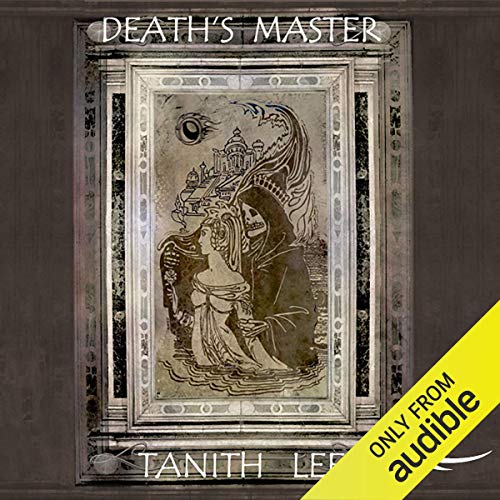 Death's Master, winner of the August Derleth Award for Fantasy, is the second book of the stunning arabesque high-fantasy series Tales from the Flat Earth, which, in the manner of the One Thousand and One Nights, portrays an ancient world in mythic grandeur via connected tales.

Uhlume, Lord of Death, second of the Lords of Darkness, King of Shadow and Pallor, makes an unusual bargain, which sets in motion an intricate sequence of events that entangle men and gods, queens and kings, sorcerers and witches, and lowly wanderers. When the secret to immortality falls into human hands, dark magic and wickedness are unleashed, testing the bounds of mortal love and sanity, and questioning the nature and purpose of life itself.

Come within this ancient world of brilliant darkness and beauty, of glittering palaces and wondrous elegant beings, of cruel passions and undying love.

Rediscover the exotic wonder that is the Flat Earth.

What listeners say about Death's Master

I love these stories and haven't found many that compare when it comes to fantasy. I'm always on the hunt for others like it.

Even better than Night's Master

On Tanith Lee???s Flat Earth, humans live in the space between apathetic gods and vain and meddlesome demons. In the first FLAT EARTH book, Night???s Master, we met Azhrarn, prince of demons and ruler of the night who found and loved a human orphan. I loved that book for its exotic setting and gorgeous fairytale quality, but Death???s Master, the second FLAT EARTH book, is even more enchanting. While the first book was a series of connected tales, Death???s Master is a traditional novel. This time we meet a second Lord of Darkness, Uhlume, Lord Death, when he makes a deal with Narasen, a human warrior queen.

Narasen, the Leopard Queen of Merh, doesn???t like men. When she rebuffs a powerful magician, he curses her, causing plague, famine and barrenness to settle in Merh. An oracle announces that the land will be healed when Narasen, who is barren, bears a child. After the people of Merh have sent all the men they can muster to Narasen, she seeks escape by asking the witch Lylas, Death???s Handmaiden, to arrange a deal with Death.

Uhlume, the Lord of Death, gives Narasen a child, but the price she must pay is heavy: after giving birth, she must remain under the Earth with Uhlume for 1000 years. The rest of the story follows Simmu, Narasen???s hermaphrodite child; his friend Zhirem, whose mother also made a deal with Death; Lylas, who assigns nine virgins to guard the waters of immortality; the demon Azhrarn, who can???t help but meddle in human affairs; and other characters that???ve unfortunately come to the attention of demons.

It???s hard to truly like any of these characters, which, I suspect, is the main reason that the FLAT EARTH books are not universally loved. Tanith Lee???s characters are all well-developed, but they don???t give back. They???re not interested in whether you like them, so you???re not likely to find yourself really caring what happens to any of them. Tanith Lee isn???t offering us friends. Instead, she offers a vision of a world that???s completely foreign, yet peopled by real humans who we can relate to, whether we like them or not. Lee uses this unfamiliar world to explore familiar human nature in a way that isn???t possible outside a fantasy setting.

One theme in Death???s Master is the idea that when life becomes difficult, we often preserve sanity by knowingly casting illusions. When Narasen goes with Death to the underworld, she sees all the humans who???ve made similar deals with Death and must live in his kingdom for 1000 years. The place is horrible, but they???ve constructed illusions to make it bearable. When Narasen scorns these weak-minded people, Death explains that they survive by creating their own reality:

"The soul is a magician. Only living flesh hampers it... This land is a blank parchment where anyone may write what they wish."

Another theme is the boredom that comes with immortality on Earth. When the well of immortality is discovered and some humans drink from it, their lives eventually become pointless and dull. Lee suggests that the gods knew that the constant threat of pain and death is what gives life its meaning and joy:

"Men could not have too much. Ecstasy and vulnerability belonged in the same dish. The fear the cup would be snatched away was what gave the wine its savor and as Zhirem???s cup was sure, so was his joylessness... to die is a fear, but to live is a fear, also."

These ideas are so beautifully examined in Death???s Master, but Tanith Lee???s writing isn???t unrelievedly heavy. In fact, I think she???s one of the funniest writers I know and even this dark tale has plenty of humor. The scene in which all nine virgins were disqualified in three nights is hilarious and this description of Yolsippa the charlatan had me literally clapping my hands in delight:

"Generally Yolsippa was not a sensual man, but there was one thing, and one thing alone, which could stir him instantaneously and irrepressibly to amorous frenzy. This singular thing was a member of either sex who happened to be cross-eyed. Now the reason for this is a matter of conjecture. Possibly Yolsippa, in his tender years, had been nursed by a woman with just such a feature who had toyed indelicately with him so that ever after the erection of his weapon became associated with the strabismus of his nurse. Now and again Yolsippa had taken himself into a brothel and there lain down with straight-gazing harlots in an effort to be rid of the ridiculous taint. But it was no use; the perversion remained. Indeed, many afflicted by the squint had been most grateful for it. However, the cross-eyed being that Yolsippa had suddenly caught sight of in the desert border town was none other than the local prizefighter, a man near seven feet high with a prodigious girth, the belly of a boar and the fuse of an ox. Yolsippa completely comprehended the unwisdom of his passion, but no sooner had the two blood-shot squinting eyes been fixed on him than he began shuddering in a seizure of profound desire. Nor was it any use to seek his own medicine for dispelling such emotion since it was made of water, spirit, and mules??? urine."

Here, and in all of her writing, you can clearly see the influence of Jack Vance, who Tanith Lee calls ???one of the literary gods??? in her afterword to her story in the anthology Songs of the Dying Earth. In fact, Lee says that ???Influence is too small a word. What I owe to Vance???s genius, as avid fan and compulsive writer, is beyond calculation.???

Indeed, Tanith Lee???s imagination and writing style are a fantasy lover???s dream. If you haven???t read Tanith Lee, you???re missing one of our age???s best fantasists. If you???re not into the twisted dark fairytales found in FLAT EARTH, you should at least try some of her short fiction, which is easily found in the best anthologies.

I listened to Susan Duerden narrate the audio version which was just released by Audible Frontiers. Her lush voice is gorgeous and I think she has the sexiest male voice I???ve ever heard by female or male narrator. The sing-song quality I mentioned in my review of Night???s Master was less noticeable this time. If you???re an audio reader, don???t miss this. Death???s Master, originally published in 1979, won the British Fantasy Award for Best Novel in 1980.
Originally posted at FanLit.