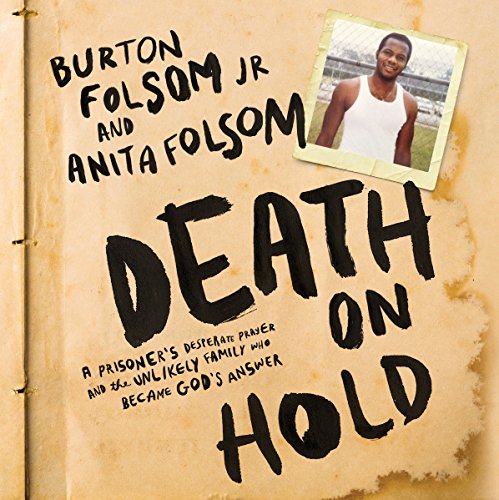 In January 1983 Burt Folsom read a story in Time about Mitch Rutledge, a man on death row with an IQ of 84 who said he was sorry for what he did. "Forget him", the last line of the story read. But Burt wrote Mitch a letter and discovered a man more interesting and intelligent than the article revealed.

Burt and his wife, Anita, began a friendship with Mitch and saw him become a leader and role model for others in prison, teaching himself to read and write (starting with copying down the spelling of items he knew from TV commercials) and becoming a national spokesman on prison life.

Death on Hold is the amazing story of their friendship and of grace, reconciliation, and redemption for a man without hope who was given a future.

What listeners say about Death on Hold

I really enjoyed listening to this book!The story was powerful, along with being very insightful. A very vivid picture was given regarding prison life, along with how the choices we make in life, even at a young age, have consequences. Inspiring

Great understanding of life in prison in Christ

I loved this book. As a minister inside prisons to inmates, this book gave me exceptional understanding of the realities that the men were dealing with. Wonderful book.

Yes. It is a compelling story of redemption of man from despair through unexpected friendships and God's grace.

What other book might you compare Death on Hold to and why?

I don't know another book to which Death on Hold can be compared. It is a unique book.

Who would you have cast as narrator instead of the narrators?

The narrators do a good job.

Do you think Death on Hold needs a follow-up book? Why or why not?

No. It thoroughly covers its subject.

There are some editing errors in the audiobook. The chapters are numbered incorrectly, all are off by +1. I.e. Chapter 4 is really Chapter 3, Ch 40 is really Ch 39, etc. Also in chapter 41, the editor clearly forgot to finish editing the audio clips. The narrator can be heard clearing his throat, reading and re-reading the same phrase, garbling the words and re-reading them, saying to himself, "that didn't sound right" (or something like that) and re-reading. I love the story and would up my rating if I heard a properly edited copy.