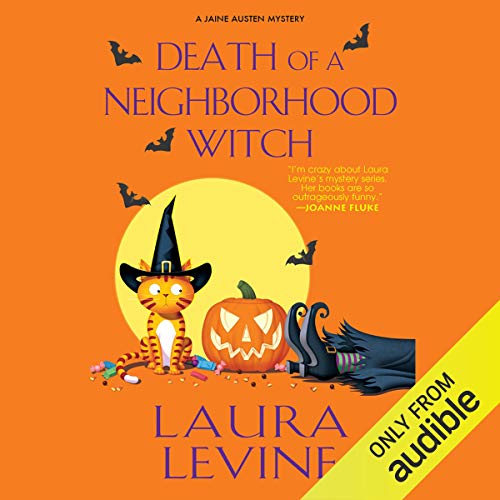 Death of a Neighborhood Witch

Death of a Neighborhood Witch

When Jaine Austen's beloved cat Prozac unwittingly scares to death a parakeet belonging to the neighborhood's resident curmudgeon, Jaine finds herself knee-deep in toil and trouble. The cantankerous Hollywood has-been once played Cryptessa Muldoon, television's fourth most famous monster mom. Now she spends her days making enemies with everyone on the block. So when the ornery D-lister is murdered with her own Do Not Trespass sign on Halloween night, the neighborhood fills with relief - and possible culprits. With a killer on the loose, Jaine hardly has time to fall under the spell of her yummy new neighbor, Peter. As the prime suspect, she summons her sleuthing skills to clear her name and soon discovers that everyone has a few skeletons in their closets...

At Last! Jaine Austen on Audible

About seven years ago, when the annual Los Angeles Times Festival of Books was still at UCLA, as I was dragging exhausted, sunburned and way over sugared children (who still have no idea what it means to have actually met Sally Ride), I passed the "Sisters in Crime" booth. A bright paperback title caught my eye: "The PMS Murder".

I love the LA Times Festival of Books so much there's a clause in my child custody agreement that I always get my kids that weekend, and that title sang to me. I was so cranky with the fabled monthly symptoms by the end of that day that if just one more 'First Five' balloon had hit me in the face, I would have popped it with one of the bazillions of pens and pencils my kids collected that day.

So, I bought Laura Levine's "The PMS Murder" (2007), and had her sign it, without even caring what it was about. The title alone felt like vindication. And then I read it - that evening. The next year, I found Laura Levine again. I bought two more paperbacks. Eventually, I read them all, hardbacks included. That was, until I started The. Long. Commute. And Laura Levine's Jaine Austen mysteries weren't on Audible. Until now.

"Death of a Neighborhood Witch" (2013) is a laugh-out-loud jaunt through the below-Wilshire, less fortunate but still striving part of West Los Angeles. Levine captures that real Los Angeles, the one where apartment walls are apt to collapse in the next earthquake: native Spanish speakers are derided and assumed illegal; and the right shoes make woman, even if she's wearing Louboutins by day and eating Top Ramen every night.

The witch in question is a one-season Morticia Addams derivative sitcom star Cryptessa Muldoon. Someone attempts to frame Jaine for her murder - but who? The list of suspects is long, their foibles many, and what they say - well, Levine wrote for Laverne & Shirley (1976 - 1983). I suspect that Penny Marshall delivered most of Levine's lines. And Jaine's cat, Prozac - let's just say if I get a cat, I'm naming it Xanax. Or Sir Librium.

Brittany Pressley's narration disappointed me because after half a decade, I'd really began to identify with Levine's advertising writer/detective Jaine Austen. Especially the problems with errant slenderizing undergarments. Pressley isn't the Jaine voice I've heard in my head, which was My Own Voice. I got over that, and Pressley was pretty good. I never confused one character for another.

This is another great book in the Jaine Austen series. As always, Jaine is funny and smart. But she needs new friends. Lance was horrible. I also think Prozac should run away or get lost. As for the story, it is fast paced and very good. I have already bought the next book and will start on it as soon as I finish this one.

You've Got Mail and Murder!

I am always reading anxiously to find out whodunnit. Laura Levine consistently has more than one suspect; all very different people, with different motives. Jaine Austen is a hoot along with her devoted furry friend. As for the narrator, Brittany Pressley, no one could have read the story better!

With three of my favorite things - cats, humor, and mystery - this series has quickly become my favorite!! In every book there is a twist that keeps you guessing! The author writes very quirky and unique, yet believable, characters.

The main character is a very average and thus relatable woman. I love that she isn't perfect, and that we can laugh about it. We even get to hear about her parents antics in their retirement community. These books never fail to make me laugh out loud - with help from a fantastic narrator who has perfect delivery! She gives the characters unique voices too, so you're never confused as to who is speaking.

This particular book is set around Halloween. Jaine and her neighbor/friend are both in love with the same guy. This leads to various humorous moments in their standoff. We get to meet the rest of her neighbors as well, and they are an interesting bunch! When one of them is murdered - they all seem to have motives. Good luck guessing who did it and why! Love these books!

Great story from beginning to end!!!

Lots of twists and turns. Very enjoyable till the very last word! A must read!!!!