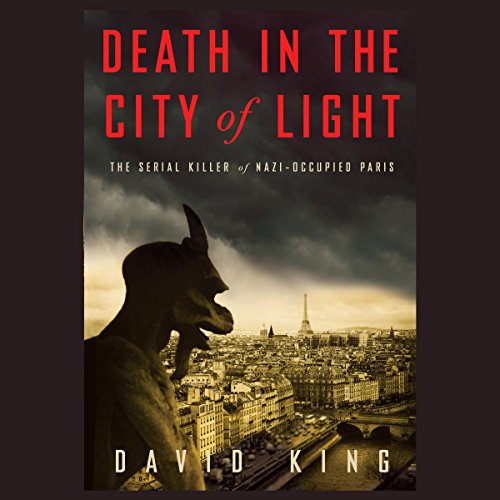 Death in the City of Light

Death in the City of Light is the gripping, true story of a brutal serial killer who unleashed his own reign of terror in Nazi-Occupied Paris. As decapitated heads and dismembered body parts surfaced in the Seine, Commissaire Georges-Victor Massu, head of the Brigade Criminelle, was tasked with tracking down the elusive murderer in a twilight world of Gestapo, gangsters, resistance fighters, pimps, prostitutes, spies, and other shadowy figures of the Parisian underworld.

The main suspect was Dr. Marcel Petiot, a handsome, charming physician with remarkable charisma. He was the “People’s Doctor,” known for his many acts of kindness and generosity, not least in providing free medical care for the poor. Petiot, however, would soon be charged with twenty-seven murders, though authorities suspected the total was considerably higher, perhaps even as many as 150.

Who was being slaughtered, and why? Was Petiot a sexual sadist, as the press suggested, killing for thrills? Was he allied with the Gestapo, or, on the contrary, the French Resistance? Or did he work for no one other than himself? Trying to solve the many mysteries of the case, Massu would unravel a plot of unspeakable deviousness. When Petiot was finally arrested, the French police hoped for answers.

But the trial soon became a circus. Attempting to try all twenty-seven cases at once, the prosecution stumbled in its marathon cross-examinations, and Petiot, enjoying the spotlight, responded with astonishing ease. His attorney, René Floriot, a rising star in the world of criminal defense, also effectively, if aggressively, countered the charges. Soon, despite a team of prosecuting attorneys, dozens of witnesses, and over one ton of evidence, Petiot’s brilliance and wit threatened to win the day.

Drawing extensively on many new sources, including the massive, classified French police file on Dr. Petiot, Death in the City of Light is a brilliant evocation of Nazi-Occupied Paris and a harrowing exploration of murder, betrayal, and evil of staggering proportions.

“Erik Larson's tour de force of narrative nonfiction hasn't been matched - until now… While this work is painstaking in its research, it still has the immediacy and gasp power of a top-notch thriller. True-crime at its best.” ( Booklist)
“A gripping story…this fascinating, often painful account combines a police procedural with a vivid historical portrait of culture and law enforcement in Nazi-occupied France.”( Publishers Weekly)
“Gripping….expertly written and completely absorbing” Kirkus Reviews)

What listeners say about Death in the City of Light

Too many facts too little story

The book sounded like a documentary, listing fact after fact. It was hard to follow. I would have enjoyed a bit more story. You may like it but it wasn't my cup of tea. At least the narrator Paul Michael was good and entertaining to listen to.

The comparisons to "the devil white city," are really only apt for the context of the story. I'm afraid i also missed the emotion, fear and real horror of what this man did to people already in dire straits. Interesting sure. But not all that engaging as a story - had much more of the documentary feel without the real draw. It wasn't terrible, but not up to par for some reason.

The description of this story lead one to believe it would read like a novel... It read like a documentary and just droned on with names, dates, and times. It started out alright, however by chapter 12 I had had enough and jumped straight to the end just to find out what happened. Too bad, as this story had the potential to entertain and educate.

I thought this would be like Devil in the White City - NOT! it is a dry incantation of a serial murderer- takes real skill to make this as boring as it is but the author succeeds- there is no story here...

I should have loved this book

The true story of a serial murderer set against the backdrop of occupied Paris? Sign me up!

That's how I guessed I would react to this book; I was wrong. The most compelling parts of this book are contained in the first hour or so, with the discovery of the bodies in 1944. The author then jumps around back and forth in time, from detective, to murderer to victims, and manages to tell us that the murderer did it when he should have been building suspense about his guilt. Later, he tells us who the killer is hiding with while trying to build suspense as to his whereabouts.

Compelling story, disappointingly told. I found myself slogging through the latter 2/3 of the book rather than being on the edge of my seat.

The narrator was fine, though I didn't care for quotes being read in a French accent. That's probably my thing, but I still count off for it.

Recently, I have read The Murder of the Century and The Devil in the White City. These were both set in the late 1800s and were written in a way that they almost felt like fiction. They were very readable, very well researched, very enlightening. When I saw Death in the City of Light, I was excited. This sounded like yet another well-written, well-researched historical journey into the mind of a killer. It wasn't.

I understand that a lot of background information was needed to set this up. That was necessary in the other books. But it got to the point where I wondered if it was padding to flesh out the required page count. The actual time spent with the killer was minimal considering he was the focus of the book. The most entertaining part of the book (for me) was in the second half during the trial. The killer was quite vocal.

I think I was more disappointed because of the author's statement in the forward that he had been given access to records kept secret since the the trial, and I expected a lot of in-depth information. If it was there, the author is still keeping it secret.

I think my opinion was also colored by reading the two fascinating books I mentioned in the first paragraph. I would recommend either one of them over this one. Sorry...I really wanted to like it!

Almost Great but Not Quite

You could easily compress this story by leaving out a lot of the rather extraneous historical background. There were points where the flow of the narrative ground to a halt for a history lecture. Was hoping it would rise to the level of Devil in the White City but it never really did.

Well suited to the task and he seemed comfortable with the complicated names and language. Seamless though not particularly exciting or expressive.

I could easily see Anthony Hopkins in this international thriller about a lesser known serial killer. So yes!

Don't waste your blunt! No story just a list of facts. I just could not take it after forcing myself through the first part. I even tried to listen to the end, but just more of the same crap.

The truth is more fascinating than fiction – always. This is a story of a man who admits to killing 60+ people for the greater glory of country and accepts no blame for his crimes. The author has researched and delivered an excellent period crime novel that must be read to experience the true horror of the story. As in real life, many of the questions still remain unanswered as to the true methods of murder and the whereabouts of the fortune of the maniacal Doctor. I thoroughly enjoyed this book.

Even the reader's voice added to this historical gem. I would expect Hollywood to jump on this story. Make the investment of 1 credit for this audio book. Well worth it and very entertaining!

Basic but overall an OK Listen

Given this one only three stars, difficult to get into at first, the reader is not exactly inspiring me to go on listening and after the third attempt to listen again from the beginning, I've actually given up and just picked up a copy in print from the library to finish the book by reading it for myself.

Story line wise, its not a Dean Koontz although you could be forgiven by thinking it is similarly written, it has got everything from murders, mystery, suspense, both thrilling and chilling moments along with twists and turns, bit over descriptive in places but otherwise a good read, the author has done well not skipping or jumping from crime to crime but woven them into a neat fabric as the basis of the book with lots of extensions to the under lying plot beautifully worked in on top. Lots of levels to this one.