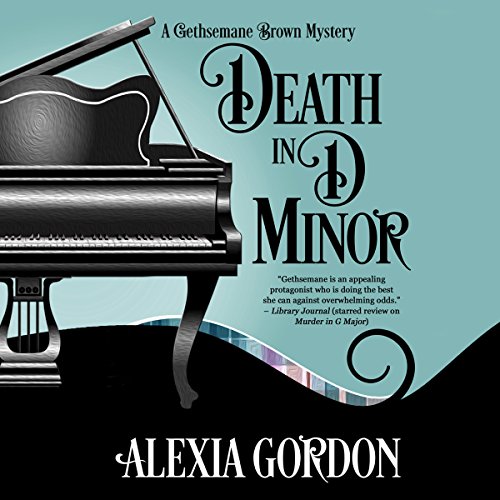 After solving a string of murders and getting used to living with a snarky ghost, Gethsemane Brown tries to rest easy. But in this second book in the series, her roomie disappears, her landlord decides to sell her cottage to a developer, and her brother-in-law comes to visit. The ever-resourceful African American musician and expatriate scrambles to call her spectral roomie back from beyond and to find a way to save the cottage from destruction, but those concerns take a backseat when her brother-in-law is accused of stealing a valuable antique. In order to try to save him, Gethsemane strikes a deal with an investigator to go undercover and snoop for evidence of a forgery/theft ring. But while snooping, she accidentally conjures the ghost of an 18th-century sea captain, ends up the prime suspect for a murder, and races to untangle a web of phony art and stolen antiques to exonerate both herself and her brother-in-law before the killer targets her.

What listeners say about Death in D Minor

The plot is OK and the characters are interesting but I liked the first book better. This book seemed forced. I will probably get the next book to see if it's as good as the first book.

Not sure what happened to my previous review. I didn't really like this story as much as the first one. I missed Eamon in this one. And what is going on with Orla? It seems like that plotline was dropped completely. The narrator though fine, sounds like she is reading for a romance novel, which makes the whole audible experience disconcerting. (I was hoping they were going to bring back the former narrator but it doesn't seem like they will so I this series will be a strictly print purchase from now on.) Prospective buyers should listen to the sample audio before purchasing. You'll be able to decide for yourself how you feel about the narrator pretty quickly (it seems like for some listeners she's a hit, while for others, she's a miss.)

The narrator was changed between the first and second book. The first narrator was lively and brought Gethsemane to life. She turned the character into a funny, slightly irreverent, interesting woman. The second narrator has a flat, boring style. No matter what’s happening in the book, it’s all delivered in the same style, whether she’s eating lunch or finding a dead body.
I was so excited to find a new series with writing and characters I really enjoyed, along with a narrator that brought them alive.
So disappointed that the current narrator leaves the book boring and bland. Won’t be listening to the next two books.

Not continuing the series

I really enjoyed her 1st book in this series and the narrator was great. This book and, unfortunately, the rest in this series have a different narrator. Her reading has very little variation to convey the emotions. She voices the main character in an expressionless, slow, almost sultry voice no matter what she is saying, even though she is none of those. The author, also, lost me on this one. The main character is an African American in Ireland, yet her race NEVER has any bearing on her interactions. The last straw for me was when explaining why she was interested in an art piece created by a free-slave child in colonial Virginia. Her reason was because it was from her home state! No mention of the connection to her race. I really wanted to continue this series but I can't stand the narration and the author disappointed me.

Not great literature but very readable and entertaining. I would say this is light reading with low emotional involvement and is pretty “cozy.” This is perfect pandemic diversion! All in all, it was worth my credit.

This is the second in a series and I was interested to see after a spectacular debut if the follow up could measure up. It did that and more. We expanded the main characters world, learned more about everyone's background. Dipped our toes into another aspect of crime and are introduced to characters i hope to see again.

I couldn't get through the first chapter but...

The narration is awful. Just awful. A very sleepy expressionless drawl, where half the words seem to be slurred and I had to keep rewinding. I couldn’t stand it.
I was going to skip this entirely but then another reviewer suggested increasing the narration speed, which was actually a great idea. I am giving this book another chance now at 1.1-1.2x narration speed and hopefully I can finish it and judge the story.

Earns 5/5 Ghostly Sidekicks…Accident or Not!

Gethsemane Brown, ex-pat living in Ireland, is quite the virtuoso in more than music; she has proven to be pretty good at sleuthing, too. Her skill gets challenged when the surprising appearance of her brother-in-law and museum curator Jackson Applethwaite, set to bid on an early American miniature sampler on behalf of his museum, turns into his being accused of theft when the sampler goes missing…but could it be murder when the owner of the sampler is found dead? Inspector Iollan 'Niall' O’Reilly of An Garda Síochána (The Guardian of the Peace—Irish police) has approached Brown for her assistance in their investigation of a ring of art forgers and thieves, so things get very serious. She tries to conjure up her helpful ghost Eamon McCarthy to help exonerate her brother-in-law, but something goes delightfully wrong.

I enjoyed this story so much that I decided to revisit it by listening to the audio version narrated by Helen Duff. I am now a big fan of Alexia Gordon’s Gethsemane Brown Mystery series, but newbies can comfortably start with book 2 “Death in D Minor,” the story provides enough details and descriptions into the back story and character connections to keep you very engaged: Irish countryside? Ghostly sidekick? Forgeries? Murders? Who knew being a classical musician could be so…precarious! The story was exciting, nail-biting at times, humorous, and clever using the idea that Gethsemane can ‘summon’ up ghosts, even the wrong ghost, giving so many opportunities for a paranormal twist. It works! It is not juvenile hocus-pocus. Gordon’s characters are well developed with Gethsemane becoming one of my favorite amateur detectives. But, Captain Lochlan, an eighteenth century ship’s captain, adds such a delightful dynamic! Playing out in the background we have intriguing references to needlework, comparisons with Irish and Black history, hints of romance, and continued issues with Gethsemane being an ex-pat. No matter what version, I really enjoyed this second book and highly recommend you go read book 1 “Death in G Major” to see how it all began.

The audio version, narrated by Helen Duff, is an absolute delight, and I loved revisiting this story. She is a different narrator from the first book, “Murder in G Major,” which provides the opportunity for comparison. Duff is a very talented voice artist, but she has a deeper resonance to her voice giving her more success with the male characters, whether American or Irish. She interprets Gethsemane’s Virginia background differently offering a slight southern drawl..,definitely a slower cadence. I choose to change the speed slightly (1.0 to 1.25) which helped alleviate the slower speech. She does extremely well with the various Irish brogues, and did I hear a more educated British accent for her third-person narrator? Her interpretation of the Latin incantations, speed of the auctioneer, and all the emotional ups and downs were excellent…very entertaining! This is why I am such a fan of audiobooks.

I really enjoyed this! Some things were so totally different from the usual, like conjuring the wrong ghost and yet he was so the right one. The art fraud angle was nonstandard as well. The characters are interesting and engaging, the plot is ingenious. The publisher's blurb gives hints and there is no need for spoilers. Just enjoy!
Helen Duff does a fine narration, and I love her accent.

In Death in D Minor by Alexia Gordon, Dr. Gethsemane Brown is enjoying her well-deserved break over Christmas when she gets involved in a major art fraud case. Getting news that Jackson, her brother-in-law, is coming to visit her in the small Irish town where she teaches music, Gethsemane hurries to get ready to host him. As a museum curator who serves as a significant expert on textiles, Jackson has arrived for an upcoming auction where a priceless embroidered sampler from the 18th century is up for bid. At the auction, the sampler goes missing and gets found in Jackson's jacket pocket. Trying to help Jackson against charges of theft, Gethsemane, a great musician, goes undercover as a pianist at a party held by Olivia, the owner of the sampler, and searches Olivia's office. But then she looks out the window and spots the body of Olivia as having been thrown out the window. And now Gethsemane is a suspect. Plus, Olivia's will has gone missing as well.

This book is interesting, with a creative plot. However, there are so many characters that I couldn't keep them all straight. That made the book confusing. Further, the plot got pretty convoluted and hard to follow at times. I also missed the character of the ghost of Eamon, who made the previous book so delightful. The ghost of an 18th century sea captain makes a few appearances, but he does not have the same flavor as Eamon.

I really appreciated the performance of Helen Duff, who makes this audiobook much more enjoyable than I think it would be to read it. She does terrific accents so that even Gethsemane can be understood as a Southern African American woman, long before it becomes clear from the context.

I strongly loved Murder in G Major, the book that comes before Death in D Minor. But this book does not live up to the standard set by the prior book. I found it disappointing but still enjoyed this book. I give it four stars.