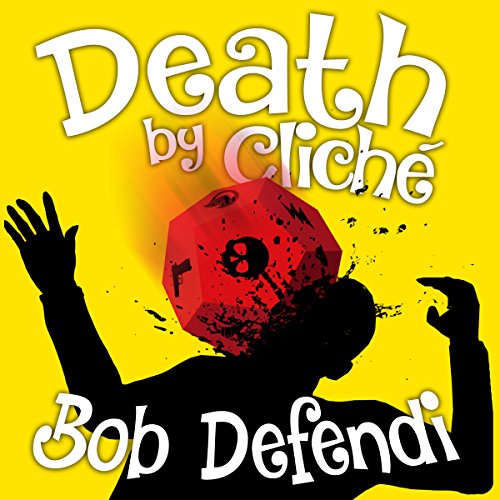 To Sartre, Hell was other people. To the game designer, Hell is the game.

Damico writes games for a living. When called in to rescue a local roleplaying game demo, Damico is shot in the head by a loony fan. He awakens in a game. A game full of hackneyed tropes and clichéd plots. A game he was there to save, run by the man who murdered him just moments ago. A game that has just become world-swap fantasy. Damico, to his horror, has become the heart of the cliché.

Set on their quest in a scene that would make Ed Wood blush, Damico discovers a new wrinkle. As a game designer, he is a creative force in this broken place. His presence touches the two-dimensional inhabitants. First a peasant, then a barmaid, then his character's own father - all come alive.

But the central question remains. Can Damico escape, or is he trapped in this nightmare? Forever.

Wait, what? This is a comedy? Ignore all that. Death by Cliché is a heartwarming tale of catastrophic brain damage. Share it with someone you love. Or like. Or anyone at all. Buy the book.

Based on a true story.

This book will have more meaning if you have ever experienced any tabletop roleplaying games. Lot of fun, laughed a lot.

Don't try this plot at home.. Please leave the comedy to the absurdly rank amateurs..

Slow to start but picks up speed

As a rpg player I've seen the idea of the player becoming the character used before. Bob Defendi puts his own twist on the idea by not having the protagonist just be transported to a fantasy world but to a fantasy rpg already in process. With all its out-of-chracter comments, cliches and two dimensional NPCs. The first 1/3 of the book is a little slow going and Bob's narration is a little monotone but it eventually picks up speed and ends on a high note. Definitely worth the listen.

Not great but would read again

A little dry and the story didn’t resolve... but the chapter quotes were fun. The nerd patronage is always welcome.

He writes what he knows

What did you love best about Death by Cliché?

We're told: "Write what you know." Bob Defendi knows gaming. And he knows how to hang a lantern on all those infamous cliches . . . in a fun way.

Too Far Beyond Tongue and Cheek For Me

What was most disappointing about Bob Defendi’s story?

It was just too juvenile and ridiculous.

What character would you cut from Death by Cliché?

The "DOOOOOOOM" scene was the last straw for me. I had to stop listening.

I get what the author was trying to achieve (or maybe not), but the attempt to turn nearly EVERY LINE into a joke just got to be too annoying for me. The Caverns and Creatures series is much better.

I was in a cliche in high school

An enjoyable tale that shouldn't take itself too seriously wrapped in a tongue in cheek romp over gaming and fantasy clichés.

Bob knocks it out of the park!

...and many other appropriate cliches!
I bought this back when it had been a serial, as part of a charity fundraiser. I laughed my butt off then, and this time as well.
DOOM!!!
If you don't laugh when you get to that part, I will buy your copy of the book from you, as you obviously have no sense of humor.

What did you love best about Death by Cliché?

You can tell that these characters are people the writer has played with in real life. Mr. Defendi has definitely been through some games that went wrong.

Omar may not have a lot to say, but when you need someone to be a Viking he is there for you.

Which character – as performed by Robert J Defendi – was your favorite?

I truly enjoyed hearing the way Damico was voiced.

I started this book on the way into work, and I didn't stop laughing until it was finished.

I remember watching The Hobbit after having read the book, and I disliked the movie at the time. I noticed every change and it became less fun. A couple years later I watched the movie, book details washed away a little, and it was wonderful.
I still have the original recordings of DBC, listened to them few months ago, and almost let them ruin This audiobook experience for me. There are differences, but most of you won't care. This will be the first you hear. The recording quality is consistently good, characters are distinct and well-performed, and the author really puts us in the story.
While I'll secretly be comparing past with present, this recording stands tall. I thought the price was a bit high, but I love the author's work and am glad to financially contribute after so long, and have an audio copy I can carry with me everywhere without technical issues. Listen and laugh.

Found this ages ago on Robert J Defendi's website. Awesome to see it here with his original narration