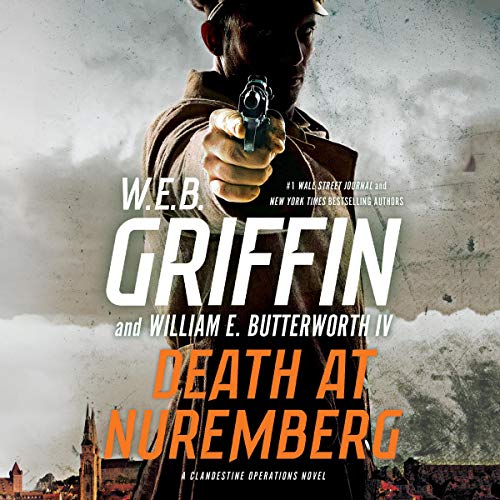 Assigned to the Nuremberg war trials, special agent James Cronley, Jr., finds himself fighting several wars at once, in the dramatic new Clandestine Operations novel about the birth of the Central Intelligence Agency and the Cold War.

What listeners say about Death at Nuremberg

I've been reading W.E.B. Griffin's various series of books for a very long time. Frankly, I enjoy them. However, since there is a lot of repetitive information within each book, the repetitions are easier to tolerate as an Audible book as opposed to actually reading the book.

The theme and story of each series of books is very similar. Typically, there is at least one young central character in each story who is brash, yet brave and heroic. Most of the time, that character is very wealthy and well connected. In other words, not typical of a real life character, but that's okay.

The law enforcement stories are centered around various divisions of the Philadelphia Police Department.

The military stories are typically US Army related, though there is also an excellent series revolving around the US Marine Corps. With the exception of the USMC stories, we find a majority of the US Army related stories included storylines that included Germany, Argentina and Texas. All seem to touch upon some aspect of intelligence and somehow the young wealthy characters are heroic and become highly connected within both military and political structures.

In one series, the author chose to turn the final book in the series into a unrealistic comedy. It was highly disappointing and I felt it it was insulting to the author's loyal base.

In this particular series, the "Clandestine Operations Series", the books in the series are in inconsistent. Perhaps the author is getting forgetful? Or in writing with his son, the collaboration has created inconsistencies? I don't know. For instance. Major Wallace goes from being a supporter & defender of Captain Cromley to Pentagon chair warming, two-faced hater of Captain Cromley. It doesn't come across as Major Wallace transitioning to that role, but simply assumes a different role as Colonel Mattingly is moved out of the series.

The glaring inconsistencies in this particular series is disappointing enough, though they will not stop me from reading or listening to future books from Mr. Griffin and/or his son.

In this particular series, i.e. the "Clandestine Operations Series", the most disappointing is the particular artist chosen to read this series, Mr. Alexander Cendese. I don't recall hearing Mr. Cendese reading other books I've listened to. Perhaps he is very good at reading non-fiction. In this particular series, his readings are very distracting from the story, because his accents for each character can only be described as horrible. For instance, in the first 3 books in this series, Major Wallace comes across as a strong military leader, friendly and even with a sense of humor. In the 4th book in the series, the narrator has him sounding like a nasty old man.

Furthermore, almost everyone has a weird German sounding accent, including Americans of Pennsylvania Dutch heritage who are born and raised in the USA. For the Russians, my wife walked by as I was listening to the story and kept laughing as she said the characters sounded like Count Chocula.

Several of the women are portrayed as unrealistic, damn near bimbo, sluts. Frankly, it's distracting and embarrassing.

This is the first Griffin book I have not thoroughly enjoyed. Narration was especially poor. All the different voices was distracting. I don't recommend it.

Would you ever listen to anything by W. E. B. Griffin and William E. Butterworth IV again?

I'll probably always have a go at a Griffin book, even one by Butterworth, because his military novels have always been a good read, or listen, til now.

Could you see Death at Nuremberg being made into a movie or a TV series? Who should the stars be?

Story is awful, repetitive and annoying

I'm used to the below par creativity in the various series by the authors (especially the son). They lean heavily on actual historical facts and figures and fill out the books with an almost canned formula they use over and over. I usually find the books mildly entertaining, but they have been declining in quality and the current series (of which this title is the latest installment) is AWFUL!! The author can't seem to come up with even the usual meager amount of original "story" and so fills in the huge gaps by essentially repeating prior books' events over and over to every new character by way of "bringing them up to speed." The main character is supposed to be a clandestine intelligence agent but seems to spill even the most classified secrets within 30 seconds of meeting someone because he has a gut feeling that he can trust them. Others characters either hate him with the strongest or passions or worship him with uncomfortable zeal and worship. And just about every time the main character opens his mouth, the author feels the need to describe him as "opening his automatic mouth" or some variation thereof. It makes me want to scream because it has become so painfully annoying. I loved The Brotherhood and The Corps series. The series that have followed have been increasingly less entertaining and are now trash unworthy of a community college creative writing semester project.

This is a great story, hampered by poor narration. I almost stopped listening and asked for my money back. Fortunately, it got better after the first few chapters.

The first few chapters sounded like they were speeded up and the narrator was using cartoon voices. Maj. Wallace sounds like a chipmunk, and the women’s voices sound like an effeminate man. It got reasonably bearable in later chapters, but I still cringed when he did a woman’s voice. The voices and accents were inconsistent, so it was hard to tell who was talking.

Being nit picky, he pronounced SIGABA differently than in the 10 previous books that used that radio transmitter/ receiver. The editor should have caught that.

I’m anxiously awaiting the digital copy from the library so I can get the bad taste out my ears!

Every General in this book sounds like An eighty year old Gabby Hayes or his ninety year old cousin. This author deserves much better than just stock characters by the narrator.

The worst of Griffins books by far

Story
Meandering, lost, spiderwebbing, you can tell that W.E.B. Griffin is not the primary author on this book, his son doesn’t have his storytelling skills.

Voice Characterization
Horrible, the guy that has voiced this and the other 3 books in this series is just plain horrible. He has no skill at all in creating a vocal recognition with the characters, and is almost unlistenable to.

Once again the narrator does a fantastic job of this WEB Griffin series. The story was riveting and I listened to this over the weekend because I just couldn't "put it down".

liked all but the voice of Col. Wallace. would have preferred a continuity. previous book he sounds late 30-40 and in this one he sounded more like 60s-70s

This Review Needs a Title....

A continuation of DCI Jim Cronley's adventures. He is transferred to Nuremberg to protect the chief American prosecutor and tracking down Odessa. Again, there are many players in the book--sometimes hard to track them all. The book doesn't really have a climax, rather it seems like another chapter in this guy's life. It's a good story, but one would think that the book would be a bit richer as the author actually spent time here doing this kind of work. Historical fiction with humor and a bit of M*A*S*H irreverence tossed in....fun read.

So formulaic as to be obnoxious. If it were written by AI, they must have used a TRS 80. Performance made it nearly impossible to distinguish between characters that I really didn't care about anyway. If I hadn't been on a long drive, I would have ditched it.

love this series of books.

a great series I can listen to again and again. I look forward to the next one.