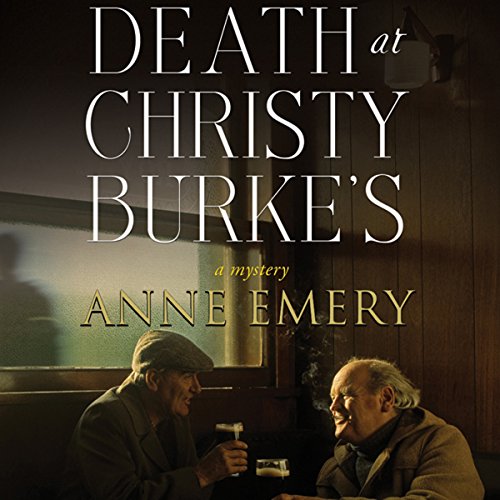 When spray-painted graffiti appears on the wall of Christy Burke's pub, indicating that there's a killer on the premises, Burke's grandson, Father Brennan Burke, is asked to investigate the vandalism. Though not at all keen on probing into the lives of the bar's clientele, he has little choice once a body is found on the property. Issuing orders from a cell in Mountjoy Prison, the pub's current owner wants the problem solved without the police anywhere near his building.

Assisted by his pal Monty Collins and fellow priest Michael O'Flaherty, Brennan begins to uncover dark secrets worth killing for in the lives of the pub regulars. In addition to the events surrounding the pub, Brennan's murder investigation becomes overshadowed by ominous events in Belfast that may soon come home to roost in Dublin.

Sinister figures are spotted in and around the pub, people are being followed in the street, and Brennan comes to possess explosive information that he cannot reveal to security forces. The situation compels him to take a hard look at Irish history and his family's place in it, and he can't shake the feeling that an act of violence in Northern Ireland is about to be avenged soon - and very close to home.

What listeners say about Death at Christy Burke’s: A Collins-Burke Mystery, Book 6

The worst of the series

I've enjoyed all the other books in the series, but this one couldn't hold my interest. Only a person who is steeped in the Irish Freedom movement would possibly stick to it - the plot was thin.

Has Death at Christy Burke’s: A Collins-Burke Mystery, Book 6 turned you off from other books in this genre?

Not at all, just this particular story.

Did Christian Rummel do a good job differentiating all the characters? How?

I think the narrator has done these characters enough to have a good grip on how to portray them.

What character would you cut from Death at Christy Burke’s: A Collins-Burke Mystery, Book 6?

I'd cut the book, or rewrite it to make it more interesting.

What would have made Death at Christy Burke’s: A Collins-Burke Mystery, Book 6 better?

I simply cannot get into this book, its so boring and dry. I believe it's the worst of the series. I love this series, but not this book.

Well, I seem to be in a minority again, I really didn't enjoy this book as it was so political - all about the Irish troubles - I didn't even find it very well balanced, with heavy leaning towards the Catholic point of view - (I don't hold any opinion on the specific rights and wrongs of the issue so do not think that my comment is biased in itself)

Considering that this was supposed to be a murder mystery, the actual death that was being 'investigated' seemed just a minor incident that didn't form much of the story - I am just SO disappointed in this book - I managed the 2nd star because I was at least driven to finish it.

I particularly noticed the Canadian stresses in some of the Irish speech - with INquery being emphasised on the first syllable rather than enQUIRy..... also the thrown 'missals' rather than 'missiles' - that one took me a minute to understand as I couldn't fathom why anyone would be throwing prayerbooks!!

I really will give this series a miss from now on - I have read them all up to this one - but - no more!

What a treat this book was, from cover to cover. Ms Emery has story-telling down to a fine art. Ostensibly this is a murder mystery, but it is so much more. Woven around the main who-dunnit is a wonderful cast of interesting characters, Irish history, solid dialogue, just enough mystery to keep you guessing, a TRULY explosive and heart-breaking finale, and incongruous as it may sound, also some good chuckles along the way. These days it seems that mystery or who-dunnit writers are encouraged to push the plot along at break-neck speed, whisking the reader along with barely a moment to catch breath. Ms Emery has both the talent and the confidence as a writer not to have to do this. She takes her time and because her story-telling is so good, she can afford to. The story is so tightly woven that she can comfortably take us on journeys which do not detract from the murder mystery but add something to make a richer reading experience. Do yourselves a favour folks, if you like a good story (not just events strung together to fill pages) then give this series a go. The icing on the cake for all these books is the narration by Christian Rummel. He does a superb job. It's no wonder there are literally dozens of books out there narrated by him, he is awesome.