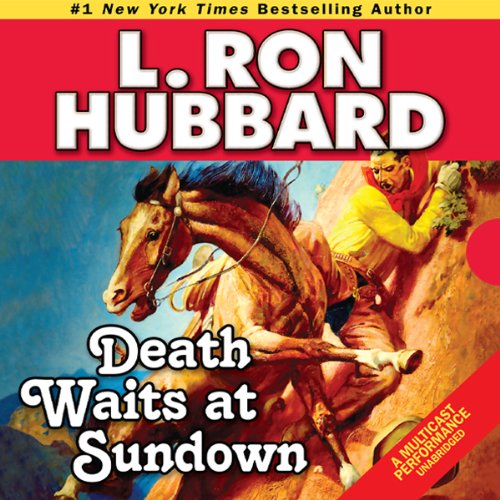 Lynn Taylor and his kid brother Frank may not be angels, but they’re not devils, either. They’re just a couple of men - two-fisted Texans who have landed on the wrong side of a corrupt lawman.

Young Frank’s been framed for robbery, rustling, and murder, and if Lynn doesn’t think fast, his brother’s going to end up the guest of dishonor at a hanging party. Lynn cooks up a daring plan to clear his brother’s name and rope in the real outlaw.

But it means Lynn will have to turn outlaw himself, and if he’s caught, it’ll be his neck on the line - and in the noose.

Also includes the Western adventures, “Ride 'Em, Cowboy”, the story of a man and woman’s rodeo rivalry that leads to romance; and “Boss of the Lazy B”, in which a lady gets swindled - and the swindler ultimately gets justice.

Catch the snap of a whip and the crack of a Colt .45 as the audio version of Death Waits at Sundown delivers nonstop Wild West action.

“Rough and tumble action with a twist, and all are a great read." (True West magazine)

"Hubbard is always a quick, fun read. Fans of pulp writing will eat these up. The audios feature full-casts and great sound effects. Listen to one and you’ll be hooked." ( Library Journal)

What listeners say about Death Waits at Sundown

All the mini stories were just great, lots of action but too short for my liking.

Did the narrators do a good job differentiating all the characters? How?

All narrators were just great, they really make you feel like in a cinema.

Great stories. The performance was very good. Looking forward to listening to other books by L. Ron Hubbard.