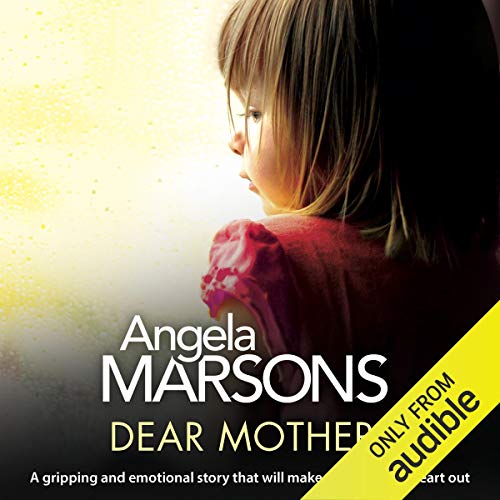 A Gripping and Emotional Story That Will Make You Sob Your Heart Out
By: Angela Marsons
Narrated by: Alison Campbell
Length: 7 hrs and 56 mins
Categories: Fiction, Literary
4 out of 5 stars 4.2 (29 ratings)

Three sisters. Three childhoods ruined. One chance to heal the scars of the past.

After their death of their cruel and abusive mother, estranged sisters Alex, Catherine and Beth reunite once again.

Alex, the youngest, is a bitter, unhappy woman who refuses to face the horrors of her childhood. Finding solace in a bottle, her life is spiraling dangerously out of control.

Eldest child, Catherine, has striven for success, despite her difficult upbringing. But behind the carefully constructed façade lies a secret that could shatter her world forever.

Beth, the middle child, bore the greatest burden. But having blocked out the cruelty they suffered, she remained with their mother until her death. Now she must confront the devastating reality of the past.

Brought together as strangers, the sisters embark on a painful journey to heal themselves and each other. Can they finally put their terrible childhoods to rest and start over?

Excellent novel from 1 of my favourite Authors.
Narration became annoyingly inconsistent! The Initial individuality of each characters voice sounded clearly individual at the start, but they began sounding all the same around 3/4 through book so was difficult to realize who was who unless their names were actually mentioned. nice sounding voice though.

A well written chronology of child abuse. Unfortunately it is not something I want to read for enjoyment. A tragic story all around

Well written story of family dysfunction and secrets. Gives great thought to the impact of abuse on the human psyche and personality.

This book brutally laid bare my soul and gently healed it at the same time. I'm speechless. Thank you Angela Marsons

Beautifully told and I thoroughly enjoyed it . This author is becoming my favorite author

I prefer the original title!

Dear Mother was originally titled The Middle Child. It is about Catherine, Beth, and Alex, three adult sisters who as they deal with their horrid mistreatment by their mother when they were children. if you can listen to the entire novel without shedding any tears, you are a stronger person than I.

This book kept my interest well,the book is the same as The Middle Child which I purchased before.

I love anything and everything written by this author and this book is no exception. Three sisters, so completely different with different issues, find their way back somehow. I love this story even though there were some truly horrible events in places. But the whole ugly truth had to be told to truly understand the dynamics between the sisters. a fantastic listen! The narrator does an excellent job and I would listen to her again and again!

Thoroughly enjoyed this book. My emotions came out with this powerful story line. Well read

always a fan, this one brought me to tears and will be with me forever.

Another fabulous page turner from Angela Marsons. Expertly narrated by Alison Campbell. Highly recommended! Can't wait for the next one!

I cried throughout most of this book and I'm sure this story resonates with some. what a powerful story and shows the unconditional love that exists between sisters

I really enjoyed this book, Even though l felt like I've been on an emotional roller coaster. It is very well written by Angela and marvellous narrated by Alison. Both very talented women. Thank you

I really enjoyed this audio I was pleasantly surprised . Unusual story good narration. I look forward to a new novel by this author