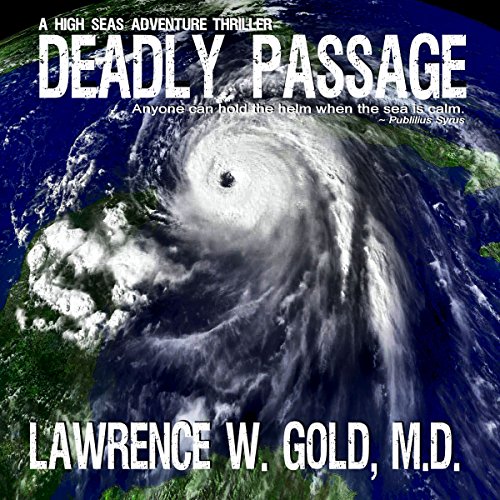 Deadly Passage is a multi-layered, high seas, adventure-thriller audiobook of bioterrorism in a post-9/11 world. The audiobook operates on several levels not commonly encountered in a high-octane thriller, including insights into the terrorists, their backgrounds, rationale, and subtle conflicts within the communities from which they have been drawn that ultimately condition their decisions and actions. The responses of US governmental agencies mirror these diverse perspectives.

Andy Reiss, a physician; Jesse, his registered-nurse wife; and Rachel, their barely-teenage daughter, head home on their sailboat, Prophecy, after five years at sea touring the world. They thought they'd dealt with every imaginable experience at sea. When Prophecy comes upon a sailboat adrift, they discover two young Americans, a brother and his sister. After bringing them aboard, both break out with a rash that Andy identifies as a deadly virus.

Soon it becomes clear that they've inadvertently rescued two homegrown terrorists intent on bringing a deadly virus to the Miami area. Soon the disease is full-blown, sealing the fates of the terrorists and all those they encounter.

Andy, Jesse, and Rachel must deal with the unwanted guests, their disease, the Cuban Navy, an approaching hurricane, and the US Coast Guard turning them away from safety, operating under the influence of conflicting political and operational motivations in the Department of Homeland Security, the Coast Guard, and the oval office. The shocking and unexpected denouements leave us twisting in uncertain winds reminiscent of On the Beach.