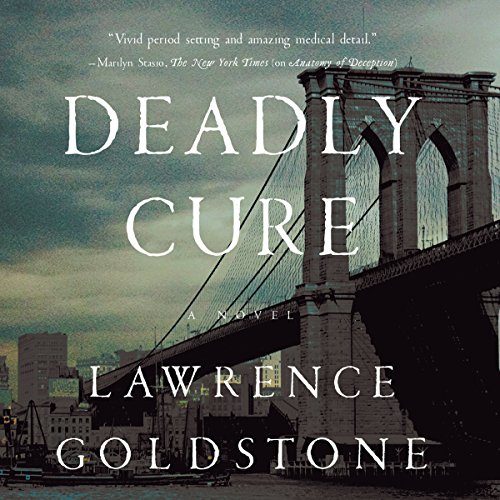 In Brooklyn in 1899, Dr. Noah Whitestone is called urgently to his wealthy neighbor's house to treat a five-year-old boy with a shocking set of symptoms. When the child dies suddenly later that night, Noah is accused by the boy's regular physician - the powerful and politically connected Dr. Arnold Frias - of prescribing a lethal dose of laudanum.

To prove his innocence, Noah must investigate the murder - for it must be murder - and confront the man he is convinced is the real killer. His investigation leads him to a reporter for a muckraking magazine and a beautiful radical editor who are convinced that a secret experimental drug from Germany has caused the death of at least five local children. By degrees, Noah is drawn into a dangerous world of drugs, criminals, and politics, which threatens not only his career, but also his life.

What listeners say about Deadly Cure

so fascinating to learn about patent medicines and the birth of two drugs so well known today. great my story and historical tie in.

A mystery based on the actual development and use of heroin for medicinal purposes. Unfortunately it wasn't made illegal until it was found to be addictive. Great read!

Couldn't get any worse

I doubt if i ever did or ever could read a book as bad as this one. It was unreal, confusing, complicated, muddled, & leaving me with questions about the author. The story was mish mash, disconnected, stupid, ridiculous & boring. Take all the stars away & that would be my review!!!!!! and as for the narrator Take him away too!