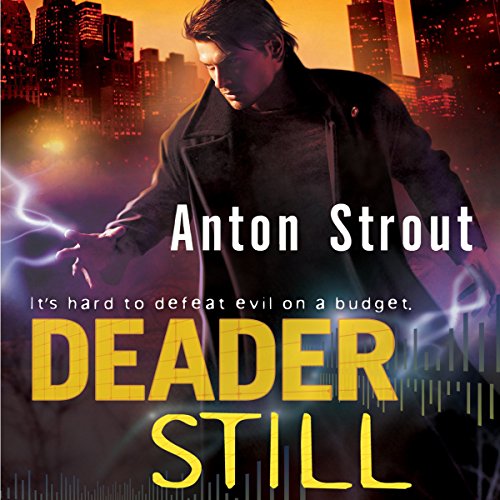 It's hard to defeat evil on a budget. Just ask Simon Canderous.

It's been 737 days since the Department of Extraordinary Affair's last vampire incursion, but that streak appears to have ended when a boat full of dead lawyers is found in the Hudson River. Using the power of psychometry - the ability to divine the history of an object by touching it - agent Simon Canderous discovers that the booze cruise was crashed by something that sucked all the blood out of the litigators. Now, his workday may never end - until his life does.

What listeners say about Deader Still

Second in the series and still Great

You can enjoy Deader Still without reading Dead to Me, but you would miss some of the subtlety of the character relationships.

Simon Canderous is a reluctant good guy and emotionally-stunted ordinary Joe. His psychometric abilities are the one thing setting him apart, and he’d just as soon be rid of them.

Deader Still is such a fast-paced, engaging, entertaining book which ended to fast. If you take the craziness of Men in Black and the duel of John Steed and Emma Peel in the BBC Avengers you get a feel for Simon and his mentor Connor or girlfriend Jane.

It started with a pit full of magically-conjured rats and while there have been no vampires for 737 an entire boatful of bloodless lawyers turns up drained of blood.

As Simon tries to get to the bottom of things, his private life is thrown into chaos by the arrival of an unwelcome face from his criminal past, an ex-colleague who wants his help in one final heist.

Where does Deader Still rank among all the audiobooks you’ve listened to so far?

I have enjoyed all of the Simon Canderous books in this series. At this point I've read up to No. 4 and they just keep getting better and better.

good, but a little immature

good story, but I kept wondering why the main character wasn't simply telling the others what was wrong. instead telling so many lies, then getting caught and telling more to cover himself.

that and he was a little slow to figure out some painfully obvious things.