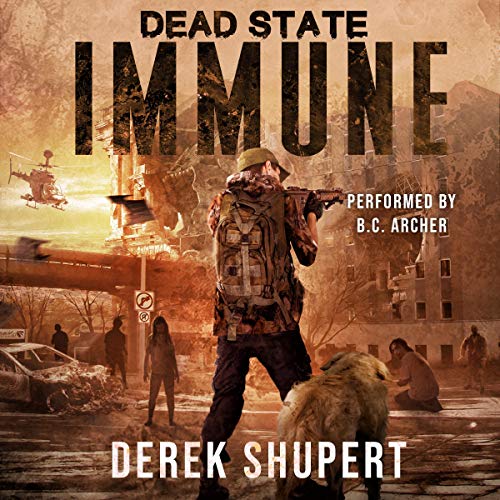 An isolated military hospital. A horde of hungry chasers. To get out, they’ll have to break through the savagery.

James will do anything to save his sister. After fighting to reach the army-secured medical building with his crew, he’s relieved she’s managed to fend off the infection. But it slices his happy reunion short when a sea of dead breach their barricade.

As zombies smash their way up through the floors, his stomach plunges when he discovers the secret to saving humanity lies outside the blockade. And the only means to retrieve the data is for James and his faithful dog to descend into the hellish battleground.

Can James keep both his sister and the cure safe, or will the murderous mob rip humanity’s last hope to shreds?

Immune is the fourth book in the dark Dead State post-apocalyptic series. If you like determined characters, unrelenting undead armies, and high-stakes escapes, then you’ll love Derek Shupert’s gritty tale of desperation.

So addicted to this series and I am so glad I have the next book downloaded and ready to listen to. Get to writing Derek I’m going to need more

love it, it keeps you on edge with suspense and when he found his sister I was so happy! going to jump right in to the next book!!!

Another Masterpiece of Non Stop Action

In this book you are constantly on edge.

Other than the MC you never know who to trust.

I love the development of the characters and founding out who they really are!!

I was voluntarily provided this review copy audiobook at no charge by the author, narrator, and/or publisher.

I voluntarily left this review.

Another great book in this series!

This fourth in this series is full of action, drama and suspense! I loved it! It is fast paced and basically I didn’t want to miss a second. Here we find James, Duke, Cassie and Lucas possibly finding his Sister. They fight the chasers and others. I really enjoyed watching James grow during this series. He learned to keep his head or possibly lose it. He has had to do unspeakable things to save himself or friends. He never gave in...he ran, walked and drove to keep moving along.

This is the fourth book in this series. I would recommend reading the other three before this one. The author does a good job keeping me interested in the story. I did listen to this on audio. BC Archer did a wonderful in this book and on this series.

Really enjoyed the story, as this is the first book from the series I have listened to, I will be getting the others immediately

Good but not great something was missing

Nothing against Derek Shupert or B.C. Archer they both were awesome but I found that waiting to get this audible to continue the story I lost what has occurred in the previous audibles. So I recommend you get the full set before you start to listen. Now when the next one comes I will get it and wait to see if there anymore to be released and start the whole series again.
Now to be up front I was not impressed with this audible it seem rushed and I was lost from the beginning to the end nothing seem to fit in place and I found hard to follow the story or the events as they happen or happen prior to them arriving at the hospital. There seems to be way to many blanks spots and the title of the audible was miss leading a bit and I felt that calling it Immune was never really explained to me or my satisfaction.
That was the Cons for Pros well written and very narrated as always. Sorry there not a lots of Pro's as there were Con's.

I wan't Duke for my Dog - Love this story

James and Duke continue their adventure to find Cindy. I'm so loving these characters and this story... I don't want it to end.