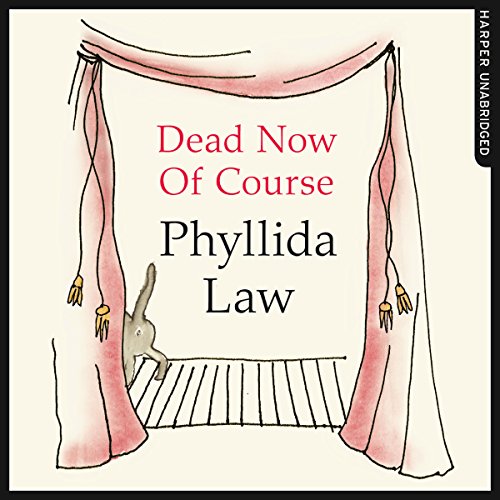 'My future mother-in-law burst into tears when she heard her son was to marry an actress. There's still something disturbing, I grant you, about the word actress. If an MP or some other outstanding person plays fast and loose with an actress, the world is unsurprised. She is certainly no better than she should be, and probably French....'

As well as being a mother (to the actresses Sophie and Emma Thompson) and a devoted carer to her own mother and mother-in-law, Phyllida Law is also a distinguished actress, and Dead Now of Course is the tale of her early acting career.

As a young member of a travelling company, Phyllida learned to cope with whatever was thrown at her, from making her own false eyelashes to battling flammable costumes and rogue cockroaches. We find her in Mrs Miller's digs, which were shared with a boozy monkey bought from Harrods, an Afghan hound known as the 'the flying duster', several hens and various children.

Filled with funny, charming anecdotes, Dead Now of Course paints a fascinating picture of life in the theatre - and at the heart of the story is an enchanting account of Phyllida's courtship with her future husband, the actor and writer Eric Thompson.

"Law manages to turn the stuff of tragedies into the most delicate of comedies...Law's technique ought to be studied on writing courses." (Daily Telegraph)
"Phyllida Law has a delightfully natural style, a gift for anecdote and the knack of seeing the funny side of pretty much everything. Someone so accomplished could write a book about their weekly trip to the supermarket and make it highly amusing...funny, brave and heartening." (Spectator)
"So much merriment courses through Phyllida Law's account of looking after her mother.... Many of their exchanges belong in an Alan Bennett play." (Daily Telegraph)

What listeners say about Dead Now of Course

Phyllidia Law is a fantastic writer and narrator!IHer memories make great stories.To have lived as many lives as she has woud be grand.

such a treat! in every way!

Snuggled up with it whispering in my ear night after night. Phyllida Law with her lilts and burrrrrs, along with her wonderfully Scottish vernacular is a pleasure to hear. Her rich tales and descriptions of her childhood intermingled with early years on the stage are a treat! The love and respect she holds for the stage and all involved is so abundantly clear. This has soothed and kept me company untolled times during a global crisis when massive anxiety threatened to gobble me whole. I believe this could be my bosom buddy until end of days. I hope Ms. Law and her adored family are all tucked away safely in their beloved Scottish bolt holes... All my love from Cape Cod!! <3

Marvelous! Phyllida Law Does It Again!

Phyllida is a wonderful writer and the only "complaint" that I have is that it was too short. I would love to see her write a sequel to Dead Now Of Course. She draws both the reader and the listener into the story as she does in all of her books. Her voice is clear and most enjoyable to listen to.