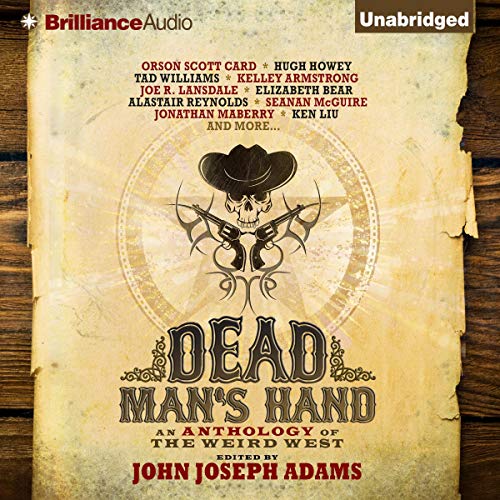 The weird, wild west - an American frontier populated by gunslingers, rattlesnakes, outlaws, zombies, aliens, time travelers, and steampunk! Twenty-three of science fiction and fantasy's hottest and most popular authors create all-new tales, written exclusively for this anthology. Aliens and monsters, magic and science are introduced to the old west, with explosive results.

The copyright information can be found below:

The following are original to this volume:

Lot of good stories, some better than others most worth listening to. Narrators are fantastic. Overall great collection

Superb for fans of Deadlands!

Great collection of stories of the weird and macabre set in the American West. There is something for everyone, including Steampunk, Weird West and even a well written homage to Batman!

Yes, there were a couple stories that did nothing for me but the rest kept my mind busy long after the story was finished. This was very well assembled.

I have listened to this book at least twice

I have listened to this book at least twice.
And some of the tales more times.
There are many good variations of tales, some good, some great. And only a few less good.

If you listen and remember the spirit of short stories on a usual subject. You will enjoy them.

My favorite was the golden age. Chapter 22.
Enjoy

I was entertained the entire listen. All the stories were great, some more than others. Creative, amazing, and exciting.

Great variety of subjects, scenarios, and perspectives. One of the better anthologies I've had the pleasure of listening to.

The main narrator is awesome and the other is good. The stories are generally good and none of them were bad enough that I regretted listening to them. The Golden Age is probably favorite, in part because the narrator got to do some thing different. Overall, the anthology does a great job of showing the variety in Weird West stories.

SHE'S NOT YOUR FAKE WIFE, I AM

REIGNING KING OF THE ANTHOLOGY WORLD
I have tooted Adams' horn before. That title should be reigning king of the original anthology world. Dozier is the reigning king of the best of anthology world. I would think original anthologies would be harder. Your not picking from he best, you are picking writers and hoping they will not let you down. Adams is starting to get competition from George R.R. Martin and this book did not help his efforts. While this was a great subject, Adams was let down by some big names. I was expecting some good stuff from Lansdale, Card, Reynolds and Howey, but there stories were just phoned in. THERE WEREN'T NO BRAINS IN THIS OPERATION.

DEAD WHITE MEN ARE GENEROUS.
Seanan McGuire a.k.a. Mira Grant wrote the best story. There were also some strong showings by Resnick, Winters, Yu and Williams. I am finding that at least in the short story genre, Tad Williams can always be counted on to write something interesting and entertaining.

IF YOUR GOING TO KILL ME, DO IT TO MY FACE
I have read all three of Frederick Douglass' biographies, but in Tobias' Sundown I heard some exciting stuff not included in any of these biographies.

EVERYTHING STARTS WITH ONE PERSON
While Gigante is a good narrator, I would have liked to have heard a lot more narrators. Ross did good, but in my favorite story by McGuire, her male character had a tendency to drop his words at the end of a sentence and often I could not tell exactly what he said. The story was still good enough to make this a minor problem.

Treasure, I love many of John Joseph Adams collections but this is my favorite. I’ve come back to listen to it like a favorite song on repeat.

One of my favorite genres. Least favorite execution.

Silly. Feels like it’s for younger readers. Just couldn’t get into it at all. This authors collection of short stories about post apocalyptic worlds, Wastelands, is fantastic though. Dead Man’s Hand simply, just sucks.

good stories just what I wanted as an introduction to the weird West. I think consitent quality and a measure of variety are the essentials in an anthology and this has both