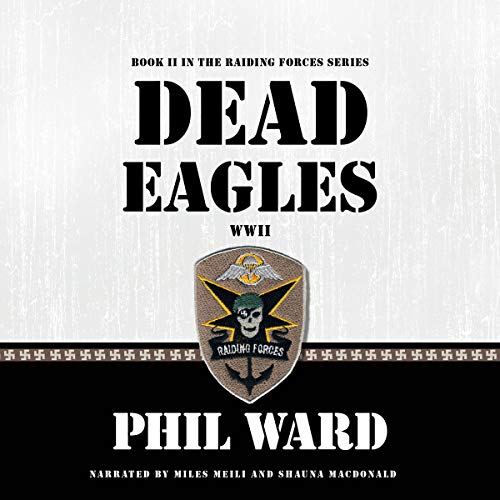 In this sequel to Those Who Dare, US Major John Randal, Commander of Strategic Raiding Forces is back, leading a crew of British Commandos, Royal Marines, and Royal Navy raiders on bigger and bolder missions to foil Hitler's Third Reich.

Off the Gold Coast colony in Africa, the Germans are operating a naval intelligence ring that gathers information about British convoys in the southern sea lane. Couriers carry the data to nearby Rio Bonita, a tiny Portuguese island protectorate, whence they are broadcast to Nazi U-boats and surface raiders from a clandestine radio station onboard one of three interned enemy ships. As a result, British convoys vital to the war effort are ravaged. Major Randal and the Raiding Forces's mission is to invade neutral Rio Bonita and spirit away the three ships. Failure means either imprisonment or hanging for piracy - and that Portugal will declare war on its oldest ally.

Peopling Dead Eagles are colorful characters new and old. There is Wild West showman Captain "Geronimo Joe" McKoy; the stunning Special Operations Executive operator Lady Jane Seaborn, who adopts the Raiding Forces as her own pet project; and Lady Jane's bombshell of a driver, Pamala Plum-Martin. Even Commander Ian Fleming puts in an appearance, submitting a plan for "Operation Ruthless", the goal of which is to board a Luftwaffe bomber and crash it into the English Channel in order to capture an Enigma coding device from a Nazi air-sea rescue craft.

This action-packed adventure story features Lovat Scout Snipers, the takedown of the Vichy French fleet in English ports, daring Commando raids, an epic sea battle, and beautiful spies, and culminates in a deadly shoot-out in a crowed bar in Occupied France.

What listeners say about Dead Eagles

Good portrayal of all characters

Miles Meili has done Phil Ward a great service in narrating this book. The story is well connected and moved forward at a good pace. Miles filled in accents and demeanor of the characters very well. As a book unto itself the story does not build the characters up too much. However, this is a series and so the characters are build across multiple books.

a really good book with some actual history. very interesting. I would definitely recommend this book if you like WWII history.

The Raiders are more handsome than ever and the women even more beautiful. The action continues apace. We even get to meet James Bond's daddy (Ian Fleming). Alan Turing's name gets dropped. It just doesn't get any better than this. This is a fun book and overall is very well done. What is unique is that an obscure part of the globe, west Africa, is the scene of some of the action and obscure parts of the globe will become a trademark of this series. If you enjoyed the first book, you'll certainly like this one. This volume can be listened to as a stand alone story but it's recommended you do them in order. There is one major whopper error in the book, but we'll have to give Phil Ward major poetic license for this. Two of the main characters fly to Britain's Gold Coast Colony in a BOAC Boeing-314 flying boat. There's the predictable interaction between our heroes and a drop-dead gorgeous BOAC stewardess. Only problem with this scene is that BOAC had no women cabin attendants until after World War II. My mother-in-law was one of the first twelve women hired by BOAC in 1946 to serve as Air Hostesses (out of several thousand applicants). But this criticism is just for historical context, plus my mum-in-law also listened to this book and was rather cheesed off (her expression) about this scene. But it's fiction, not a documentary, and it's still a very entertaining work of military fiction. But at least I can tell Mums her objection was noted.

This is a great series and this is a very good adventure book. Very similar in style to WEB G in many ways. YET, way more better in not spending half a chapter inaccurately recapturing previous books and characters. The plots are well done, so far, there are a couple of diversions that are enjoyable so go along for the ride. Narrator does a great job. I listen to most books at 1.1x and that helps a bit. Good editing.
All in it is a very enjoyable series and this one is well done.

Even better than the first. the second of a series of 10 so far based on ww2 spec ops missions. This book covers ssome of the early war intra service rivalries. The seizing of the French Navy units in the UK following the surrender of the Vichy government. Also has a good story based on operation Creek carried out by the Calcutta light horse in Goa.. reset on to a west African Portuguese territory ( Again i think that what Phil Ward has based it on.. make your own mind up after reading.)