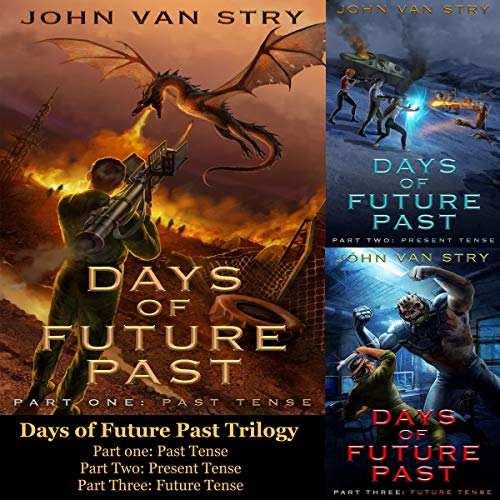 Days of Future Past: 3 Book Series

From book 1: Paul's been having a bad day, perhaps one of the worst days he's ever had. And now into the middle of all this, his instructor just got drafted by some mystical goddess to help save a world.

As for Paul? Well, he's really not supposed to be there, and if he thought he was having a bad day before all of this, it just got worse, a lot worse. He's now on a one way trip, forced to help a man who despises him while at the mercy of the world's biggest trickster.

From book 2: Coyote has a new task for Paul, one that involves him traveling north hundreds of miles over the post-apocalyptic landscape of California, the place that Paul once called home.

Thankfully, Sarah and Heather have both decided to go with him and between Heather's shooting skills and Sarah's magical ones; Paul thinks he might just live through whatever scheme Coyote has enlisted him in. If he can live through telling the girls just what Coyote's got him carrying in his pack now of course.

At least he's done with Riggs and hopefully won't have to deal with him ever again, nothing could be worse than that after all!

From book 3: Coyote has one final task for Paul, the one that is the whole reason Coyote shanghaied him here in the first place. But what can a single man, without the gifts and benefits of the gods, do against a creature that has ruled in the wastelands for hundreds of years? Besides, destroying Aybem is supposed to be Riggs' job! So just why does Coyote need him to go there too? While it's true that Riggs has finally earned Paul's grudging respect, Paul has no desire to suffer the pain that his nemesis' plans often cause him. And even if he is successful, is this really the last task that Coyote wants of Paul? Or could the trickster god have just a few more things that he needs to have done?

What listeners say about Days of Future Past: 3 Book Series

Great series at a great value

I was interested after reading the description but a bit iffy on buying into the series when I saw the first book was ~6 hours long, I usually prefer ~8h per credit. But when I saw the trilogy, I knew I had to give it a listen.
I do think the first book was probably the strongest of the series, as it had the most character development among all the characters, not just the protagonist. Additionally the third's pacing is a bit off as it essentially seems to end the series halfway through, with a wrap up mission taking another three hours. However overall I would absolutely recommend the series.

Unlike most stories there is no long and drawn out sections. From the first sentence to the last, not a dull moment!

Why I put off getting another series by John Van Stry I really don’t know, I am fully invested in the two that are currently coming out on Audible! Anyway I really enjoyed this series and coming in an omnibus edition did spur me to get it right now because of money constraints! But it was more than worth the money, I found the story engrossing and I love the characters.

I liked it. though it is for all ages, it can be adult only in the un abridged version.... haha. well fantasy it is pick it up if you like that kind of stuff.

Complete series in one

A bit of science fiction and fantasy rolled up in one. Keeps you scratching your head on what exactly is going on while Coyote does his best to keep the real hero moving forward. And who knew that Alice Cramden finally got her trip...

I would listen to it again, no complaints about the story or narrator. Apparently there's a minimum word count for reviews so this sentence is filler.

That was a fantastic read.

in the world of fantasy book series is I really like this one the MC doesn't try to start a harem when he gets very caught up in his ego the superpowered creature / God that brought him to the new world humbles him and keeps him on track. this was an epic fantasy/sci-fi/survival/romance book that I would definitely read againthe only thing I didn't like about it was that I didn't have sex scenes and honestly the story was so good that really didn't bother me that much as far as the performance went audible does this weird thing where if the books are older they don't check the copies so there are moments where it'll be playing and it'll skip out but you generally get the gist of what the characters are saying to each other definitely give it five stars.

I enjoyed the world setting of the story though it felt rushed at times. I had wished there would of been more character development of the dragons, elves and dwarves. The MC started to annoy me by book 3. There is no situation to hard for this guy. Even managing to keep two wives happy. I suppose he does serve the luck God. Still worth your time and credit.

Loved all 3 books. Narration was perfect, damn I like Coyote, trickster or not.. Mr. Van Stry knows how to write a compelling tale.

greatly enjoyed the story, Liked the story of Coyote, and the overall story line. would like to read more. of this world.