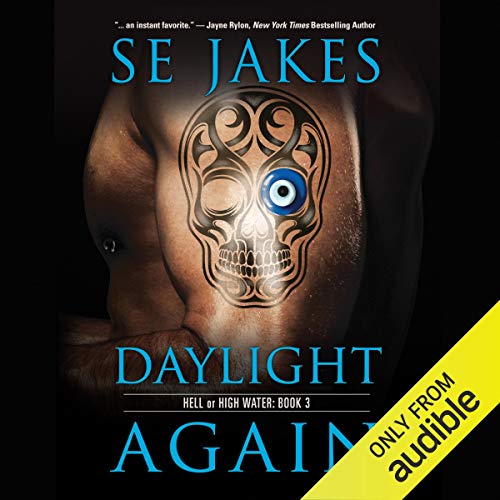 Before Prophet Drews can have a future, he must first put his past to rest. Prophet is a man on the edge, and he's pulling Tom Boudreaux, his partner on the job and in life, right over with him. When his old CO calls in a favor, Prophet asks Tom to join the off-the-grid rescue. But the mission raises all of Prophet's old ghosts: CIA assassins, the terrorist Sadiq, and, most importantly, John - traitor, former teammate, and Prophet's first love.

To help bury those ghosts for good, Prophet and Tom gather the members of Prophet's former SEAL team...and a spook named Cillian who's been tailing Prophet for years. In the process, Prophet is forced to face his team's shifting loyalties, ghosts who refuse to stay dead, and, scariest of all, his own limitations.

With everyone's lives in danger, Prophet and Tom must unravel a tangled knot of secrets, including their own. Prophet must decide how much to reveal to Tom while Tom must decide how far he's willing to go to help Prophet lay his ghosts to rest.

I absolutely loved reading this book, and the audio version is fantastic! Wonderful job with this series !

I love this series. The books get better and better. I love Tom and Prophet together. Cannot wait for the next book.

How did they not realize??? I would have always checked just in case. come on!!!

The more you learn the more you want to know. Prophet and Tom are great

This series just gets better and better!

This is book three and all books must be read in order. Prophet and Tommy’s relationship takes MAJOR steps forward in this book. There is still the backstory with John and – honestly – I hope we get a final book for this series because I’m pretty confused about where and who and why and I just want them to be happy and settled!

We learn a lot about the true Prophet and get more of the story with John – which is nice. Tommy actually really rises to the fore here and is very supportive of Prophet in the right ways.

The sex is super hot and really aggressive at times – showing the level of trust is rising between these two.

We are also learning more about Mal and Cillian who get their own book later, but for now their dance begins.

I adore these narrations. Adam North is a great choice and he does each voice distinctly and with great character.

This series is best read(listened to in order as the plot continues)
Prophet brings Tom back home, resigning himself to a relationship with him. He and Tom have learned a lot about each other's past but Prophet has another secret that scares him worse than any machine guns, spooks, CIA agents, or Saudi's. One he can't escape Eve with all his expertise.

When you think this series cant get any better, it does. this book has, even more, mix of Tom and Prophets personal growth along with the missions and scorching hot sex.

Adam North does a fantastic job narrating. I don't know if he has changed his Tom voice just a fraction or if I am just getting used to it by now. Who cares? The excitement and drama and passion he conveys are spot on. Now I am off to the next book.
If you like secret agents, special ops, undercover agents, complicated plot, well defined and complex characters, and super scorching hot man-sex, you must grab this series!

If you could sum up Daylight Again in three words, what would they be?

Tommy. No, I mean Prophet. No, yeah, it's definitely Tommy. Ooh, I forgot about Mal! Yes, that's my final answer: Mal, because he's so psychotic you just can't help but love him.

Which character – as performed by Adam North – was your favorite?

I don't think I can pick just one. Adam North did an amazing job with this entire series. I can't wait to listen to more books narrated by him. Tom's Cajun accent and Prophet's voice were a nice pairing.

I read this book some time ago and while I loved it then and still love it now, the ending left me needing more to feel like the series was really complete. It was left just a bit too open for my taste, so overall, I'd have to give the story a 4.5, rounded up to a five.