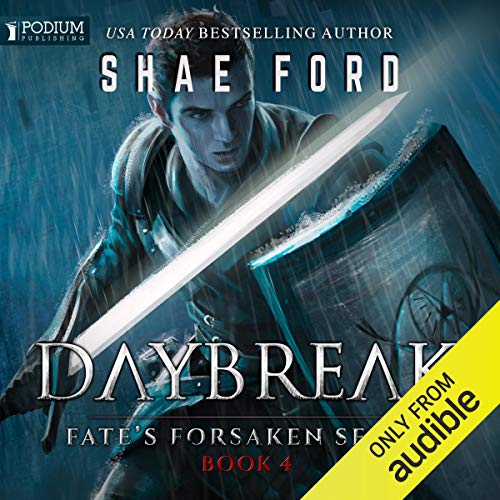 Midlan has awoken. Soldiers pour from between the gates, and monsters descend upon the kingdom. When Midlan turns its eye to Copperdock, Kael quickly discovers that no realm is safe from the wrath of the king. But while he fights to keep Crevan's soldiers away from his friends, other powers rise up behind him - including an army so terrible that it threatens to devour everything.

All paths lead to Midlan, every fate hinges upon a final battle, and the bloodshed will bring about a reckoning 1,000 years in the making - a plan woven by Fate herself. There's only one soul she can't cast for: a boy from the mountains who might undo everything if he isn't stopped. When Kael's journey carries him to the battle's end, he doesn't know that the fate of the kingdom rests upon his shoulders. The choice he makes will forever change his world...and bring him to the story's end.

Funny, cute, fantasitc. This series is a fun one filled with adventure, comedy and fun. I definatly recommend it for a fantasy reader who wants a laugh while still enjoying a compelling story.

I really liked this series, an awesome adventure with some great characters, fantastic lands and creatures.

If you are after something that is exciting, well written, has an engaging narrator and has a happy ending (so far), don't go past this book!
It is in my top 5 favourite audiobooks.

well written and well read. characters kept me interested. will read/listen to some more from shae ford.

I believe Shae Ford was planning to make the main character a female and the half dragon a male but changed it afterward. Never have I read such a whinny main character that is so emotional that makes me goes that's not 20+ year old male. I think shae needs to either go talk to more males and understand them or don't write male as a main character.

Just the right mix of horrified "oh my gosh Shae Ford isn't going to do THAT", laughter, and conclusion(s).

While her writing is not as detailed as a Tolkien, or Brandon Sanderson, etc. the world is engaging (even if the geography is not..... but hey if the worst I have to say about a book is that its GEOGRAPHY is cliché.... I would say that is quite the accomplishment).

The major difference between this book and others in the series is that you are not Only/just following Kael's world view, but many of is friends as well.

Having trust that an author is going to have written something that appeals to you, and that the work in front of yous is something you would gladly purchase again, is a great thing. I know that anything I buy from Jim Butcher, Brandon Sanderson, Kevin Hearne, etc. are going to match my desires. I now add Ms. Ford to that list.

Well written and great narrator. So sad it's over. The whole series is amazing. Can't wait to see what he comes out with next.

From the Five Corners of the Kingdom

Contents are PG-13. No sex, no F-bombs, but plenty of bloody warfare. The series ends on a happy note after allies from all five regions finally converge to confront King Crevan at Castle Midlan. Allies include pirates and fisherfolk from The High Seas, mercenaries from The Grand Forest, giants from The Endless Plains, wild whisperers from The Unforgivable Mountains, and mot warriors from the desert. They all converge on the castle because of what takes place in each region, in the first half of the book.

The king is determined to tighten control on the five regions, so his atrocities are merciless. He employs a maddened dragon, a troop of mages, his imperial soldiers, and his tormented beasts. Lord Gilderick and his zombie fallows also wreak havoc. There is a good deal of death everywhere. However, help comes from some surprising quarters — heroes are born from secondary characters and from a few enemies-turned-allies (Kael and Kyleigh are busy elsewhere).

The final battle is vivid and detailed. Nicely done! It consumed most of the final quarter of the book, with a few chapters left for happy-ever-afters. Warriors finally rest their swords, settling down to have babies and brew beer...or whatever. Even the cursed shape-changers and their beleaguered shaman find peace.

A solid conclusion to the series. I liked what Ford decided to do with the Beastmaster Lion-Man, and with the dragon-changer Dorcha/Devin. I was glad Ford employed a number of heroes, with Kael and Kyleigh one of many.

In this series, the tone vacillates oddly from seriously grim to almost comedic (Jonathan's fiddle, Gwen's temper, wild men shennanigans). Also, pacing is off: I felt the time in the Motherlands (where the dragons live) went on too long, deviating from the plot (loved a few of the scenes in that section, however). I also felt the scene towards the end, when Kael strives against Death and Fate, went on too long.

The ending was just a bit too sappy happy cotton candy. But I'd rather that than dark and hopeless, or being left in limbo.

I really enjoyed this series. One thing that I liked best was it had no sexual content and very little bad language. Thank you Shae for being a write who can bring a story to life without having to resort to all the garbage.

I loved it. It was solid and complete, brought everything together the correct way to the a serie.

Loved that all the characters were brought back and that the story ended completely. worth the listen

Great conclusion to the story!

Simply can't believe this is her very first series. She does a great job bringing the Loose Ends to a conclusion. It started out just a little slower than the other three books. But it was necessary to bring the foundation towards what she was creating for a conclusion. I definitely recommend this author.

couldn't have ended any better.

I Loved this book and hope it isn't the last. the only thing I can say I didn't like was I think it was a little short. Maybe if it hit 20 hrs that would have been perfect, though I would then probably say it needed to be 28 hrs lol

I will listen to this series many times! All the books are great. This last book was a great conclusion, but left enough, that additional books can be added.

Series really grows on you

My review of the first book was lukewarm; the story begins like so many other hero's journey sort of stories. The bad guys are paper thin characters and stereotypical.

But as the series progressed, the number of protagonists increased and they all developed into three-dimensional individuals, all admirable in their own ways. And, my favorite thing of all, the author doesn't let any of them come to serious harm.

20 hours felt like 20 minutes. Shae Ford has truly finished it all in style. Derek Perkins has more voices than a church choir!

very good read. really enjoyed the series. it kept me wanting more all the way through

love det it great ready just sad there will not be a book 5!! really good best book i have ready this year

I have over 300 audible titles and I have to say that the narration and performance of this book is one of the best I've heard. It's a compelling universe with a great story and awesome characters. I can't wait for a sequel.

Another good instalment, well narrated with an engaging story. Suitable for all ages and a good conclusion to the series

The characters make me laugh, cry, feel joy, longing, and has everything from action to love stories and makes me feel all of the other emotions that one feels when reading a good book but it really helps when the narrator is really enjoying reading it to you like Derek does.
Really looking forward to the next book to see what Kyle and Kylie’s daughter does with her power. Bring on the next instalment please. Thanks

Easy to follow, easy to connect with the characters and hard to stop listening! Simply put, it’s brilliant!

This was a good read but felt flat compared to the rest.

The end was good and finished the series well but it felt muddled and drawn out in places and in others felt glossed over.