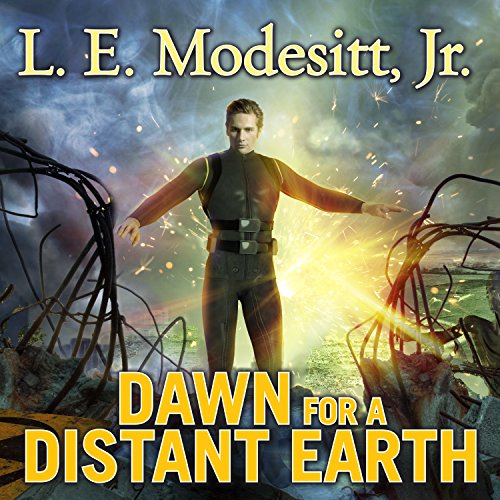 Dawn for a Distant Earth

Thousands of years in the future, Earth is a desolate ruin. The first human ship to return in millennia discovers an abandoned wasteland inhabited by only a few degenerate or mutated human outcasts. But among them is a boy of immense native intelligence and determination who grows up to become the force behind a plan to make Earth flower again. He is, if not immortal, at least very long lived, and he plans to build an independent power base out in the galaxy and force the galactic empire to devote centuries and immense resources to the restoration of the ecology of Earth.

What listeners say about Dawn for a Distant Earth

What did you love best about Dawn for a Distant Earth?

Solid environment, there were parts of the book that jumped around a bit needlessly, but considering this was written back in (1987 & I had never read the paperback before) I can't wait for the next books to come out on audible!

Have you listened to any of Kyle McCarley’s other performances before? How does this one compare?

He's solid in this as he is in other books, enjoy reading (err listening?)

Both the scene toward the end with the empress and the scene at the end with his "crew" made me cry. One of the first cries I've had reading a book in 2015 - you got me good!

I cried at the end. Like so many great books this one brought me closer to what being human is all about.

Yes, To be honest I do not know why But just a good book

What did you love best about Dawn for a Distant Earth?

It is a man doing his all to create a better place. How can you not love that.

What other book might you compare Dawn for a Distant Earth to and why?

Consider this book as a lighter, less insane mixture of Dune by Frank Herbert and Stranger in a Strange Land by Robert Heinlein.

One of my favorite series. I am so glad this series is being made into audiobooks because it gives me another way to enjoy it.

While I was shocked the reader did not have a deeper voice, McCarley's talent overcomes my initial hesitancy the more I listen.

I would recommend the book but not this audio version.

Strong character... masculine morality is often cut short... not here... I like that. Exciting and unusual setting.

Wow.. the voices used by the narrator were beyond bad. It sounded like the narrator was making fun of the characters by making them sound like cartoon character nerds, aliens and wimps.... which was much in conflict with the author's writing. The droopy dog voice is used on almost all military personnel of power.... maybe the narrator has a slight grudge?

Could you see Dawn for a Distant Earth being made into a movie or a TV series? Who should the stars be?

If they use the audible version it would star Marvin the martian... and the whole gang of characters.... Droopy dog would definitely have multiple parts along with professor duck.

Yaaa.... the narrator changed the story, by making the characters Goofy sounding. The narrator re-wrote the story.... I don't like that and I doubt that it was the intent.... Because I had read the book first it really bothered me that the silly voices changed the message.... made it trivial.

It's modesitt at his best!

It's a typical Modesitt story, but in space. although it lost something because of the narrator. I'm not saying he's bad but I guess I'm just used to Kirby!

"The ballad of the captain" sounds very much like the old Dubliners song, "Seven Drunken Nights." Loved this story after getting used to the narrator. Looking forward to the next book.

I listen to hundreds and hundreds of books and I've never had a reader turn me off from listening to a book.

As title suggests: the book downloads, but there is no cover art and it will not play. just a loading signal. Please fix!