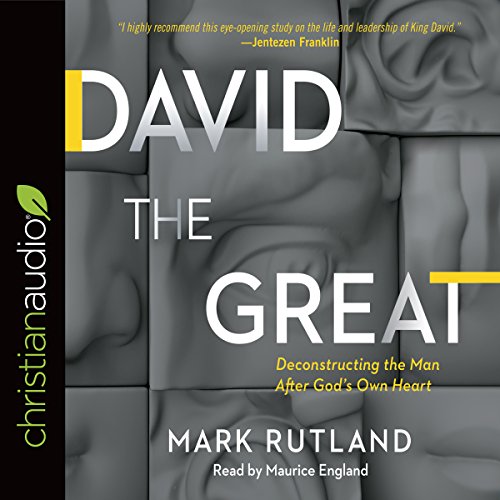 King David was a complicated, conflicted man of flesh. But too often he is viewed as an Americanized shepherd boy on a Sunday school felt board or a New Testament saint alongside the Virgin Mary. Not only does this neglect one of the Bible’s most complex stories of sin and redemption, it also bypasses the gritty, life lessons inherent in the amazing true story of David.

Mark Rutland shreds the felt-board character, breaks down the sculpted marble statue, and unearths the real David of the Bible. Both noble and wretched, neither a saint nor a monster, at times victorious and other times a failure, David was, through it all, a man after God’s own heart.

What listeners say about David the Great

This guy did as he set out to do! Hearing this book was as if we were there in David's life! Thank you for such an EXCELLENT BOOK! I'd recommend this to Any and EVERYONE
THANK YOU Amazon for giving this as my first book with you. Such a wonderful experience all together... Once we got the details worked out!

Wow, I can not begin to Praise God as greatly as I need to for such an incredibly honest and non-religious anointed interpretation. It does us no good to delight ourselves in our fairy tale interpretation of these stories and the world which we are commissioned to reach for & with Jesus, are placed at risk when we dress these stories and Bible figures up and make them into perfect saints. They are what they are just like us. We are imperfect, but if we love God and continue to seek His Face we can walk in His Grace.
Thank you Mark

Format is awesome!! It is accurate, funny and even more eye-opening. I was looking for a detailed account of David, whom I love, and this met my need, outside the bible.

Very biblical based. Accurate and anchored by the Bible. Eritten in a way that it's very entertaining and easy to listen to.

Dr. Mark knocked it out of the park. It is comforting to know that inspite our flaws, God still delights in us.

I have read a number of Dr. Rutland's books, as well as listening to and watching him preach. He is one that I never wonder if I can trust his theology. He is and always has been solid.
He also has an amazing gift for bringing to life those we've only read about in the Bible. He reminds us that they were real people, not just Sunday School characters. He does that again here and I am very thankful that I decided to give it a listen!

Excellent Book and Outstanding Narrator! The narrator made the book so much more interesting. He has this calm, soft, fluent voice of authority. I really enjoyed listening to this book-twice!

one of the best books ive ever read. very engaging and draws a vivid image of what is happening.

What a captivating and extraordinary book of the life of David. Dr. Rutland's coloquial verbiage makes it fun and exciting to understand the many facets of David and how he was a man after God's own heart. What is man that you are so mindful of us oh Lord.