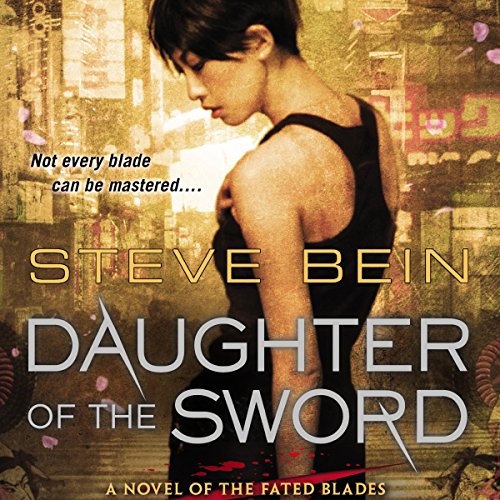 Daughter of the Sword

Mariko Oshiro is not your average Tokyo cop. As the only female detective in the city’s most elite police unit, she has to fight for every ounce of respect, especially from her new boss. While she wants to track down a rumored cocaine shipment, he gives her the least promising case possible. But the case - the attempted theft of an old samurai sword - proves more dangerous than anyone on the force could have imagined. The owner of the sword, Professor Yasuo Yamada, says it was crafted by the legendary Master Inazuma, a sword smith whose blades are rumored to have magical qualities. The man trying to steal it already owns another Inazuma - one whose deadly power eventually comes to control all who wield it. Or so says Yamada, and though he has studied swords and swordsmanship all his life, Mariko isn’t convinced.

But Mariko’s skepticism hardly matters. Her investigation has put her on a collision course with a curse centuries old and as bloodthirsty as ever. She is only the latest in a long line of warriors and soldiers to confront this power, and even the sword she learns to wield could turn against her.

"Steve Bein's Daughter of the Sword is a strikingly original saga blending contemporary thriller and historical fantasy. Enthralling ... A noir modern Tokyo overwhelmed by the shadows of Japanese history. The research is convincing, the touch light. A compelling multifaceted vision of a remarkable culture, and a great page-turner." (Stephen Baxter, author of Stone Spring)
"A sharp and superb urban fantasy, Daughter of the Sword is the perfect melding of skillful prose, fascinating characters, and compelling story. Steve Bein effortlessly combines history and legend with a modern procedural in a book that will have you staying up late to finish it." (Diana Rowland, author of Sins of the Demon)
"Steve Bein's Daughter of the Sword really captured my imagination. The interweaving of historical Japanese adventure and modern police procedural, Tokyo-style, caught me from two unexpected directions. A tight read, lots of great tension, and epic stakes." (Jay Lake, author of Green and Mainspring)

What listeners say about Daughter of the Sword

A neat detective tale.. with swords!

Its mini stories were compelling. The characters were interesting though unoriginal. Looking forward to hearing book two.

I loved this story. I am a hard core Sci-Fi Reader, but this one seemed interesting to me. It was better than any of the Sci-Fi book I have read recently.

It starts way back when a southern section of China is captured by the Barbarians. Something evil happens throughout year for the owner, including two WWII.

Entering a US Scholar.

Anything more would be a spoiler, except, I think Allison Hiroto is the Absolutely the best fit of a narrator the this book

Well, it's worth reading, when I got this book,I expected solid 3*, I never expected it to be this good.

Plot is about 3 artefacts and how they interfere in modern world,the situation occurs in modern day Tokyo,and tells about societal balance between japanese traditions and modern day world, coexistence of police and yakuzas, and of course about newbie police officer and deranged maniac killer under the influence of the cursed blade, it has everything a good book should have, so it was very good....

The only negative thing is the narrator, she is not bad, she just does not fit this book,I would've prefered a male voice.

PS
I also learned a very interesting word:
Karōshi (過労死), which can be translated literally from Japanese as "death from overwork", is occupational sudden death.

Gorgeous, genre-bending book. Cops and swords... today and yesterday. A riveting read. Can't wait to read the next one.

Fantastic story. I loved how the history and present were brought together. I can't wait to read book 2

The story was excellent. The writing is pretentious and over done. Fortunately, it's saved by a tremendous performance.

Very engaging storyline and amazing character development, with keen insight into the archetypal and historical psyche of Japanese culture and philosophy; past and present.
I enjoyed pausing at various points to search Google maps and associated photos of the geographic locations where (and in what century) the plot unfolds across the magical islands of Japan.

Allison Hiroto is terrific as always - a gifted voice-actor. You had me at your first emtionally tuned-in and perfectly anounciated words. A pleasure to listen and escape into!

An everyday tale with just a touch of magic

-accurate depiction of the life an addict's family leads
-likeable, badass but imperfect main character
-no sappy romance getting in the way of the action
-narrator is perfect!

A good solid read, but not on my must read list.

Where does Daughter of the Sword rank among all the audiobooks you’ve listened to so far?

High middle grade. The story and character writing is solid and interesting. That said I never was on the edge of my seat, laughing out loud, or unable to put the book down. Give this author a little bit more seasoning and I expect him to be churning out some great stuff.

What other book might you compare Daughter of the Sword to and why?

Lian Hearn, due to the Nipon warring states historical settings with a twist of supernatural.

Tiger on the mountain flashbacks.

No but I still very much enjoyed listening to it and found it entertaining.

Great story. More thinking, not as much paranormal action. If you like swords and Japanese culture, you will love this book.

Good beginning holds you till the end

Awesome way to start a series. loved the time hops between the different eras. great read.

Mariko the only female detective sergeant in Tokyo is on a three month trial before she has a permanent position within the drug squad. Her misogynistic boss is determined that this will not be the case, so to keep her out the way he gives her the impossible task of investigating an attempted robbery of a sword, blocking all attempts to uncover a drugs ring, the trifling case leads Mariko to the stunning story of three swords.
The story is back-filled with historical events from the age of the Samurai to the disastrous events of World War Two and a story of the three swords culminating with fate conspiring to bring Mariko and the three swords together.
Allison Hiroto gives a wonderful performance adding a definitive flavor of Japan both past and present, I would not say this an urban fantasy more like a police procedural with paranormal elements, throw in some feudal Japanese history and I may begin to describe the book as it's a mixture of genres.
I enjoyed it, especially loving the setting and Mariko's character.
I must just add what was really refreshing to the start of this series is you get a whole story! No frustrating cliffhangers here.
Looking forward to the next book..