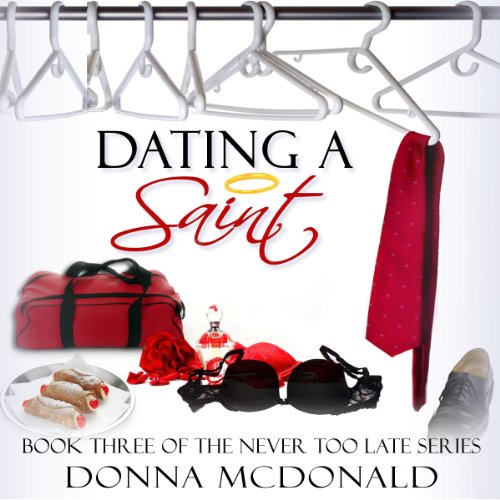 After divorcing her cheating ex-husband years ago, 42 year old Lauren McCarthy is pleased with herself for finding ways to be happy that don't involve dating and men. Who needs that kind of headache or heartache anyway? Her best friends call her a saint for choosing a celibate life over a man in her bed, but Lauren considers it just self-preservation. That's why it's so painful now to find herself seriously attracted to a married man.

Or at least, James Gallagher says he's married, even though Lauren has never actually seen him with a wife. His answers to her questions about it are vague and frustrating. Lauren doesn't want to risk getting to know Jim only to find out he's as bad as her ex. In fact, there are many reasons not to get involved with the mysterious man, but desire for him keeps overriding her common sense.

Every single time James Gallagher puts his desperate and needy hands on her, the only thought Lauren has is that Jim belongs to her. If he would only trust her with his secrets, she might be willing to risk her saintly reputation if it meant ending up in Jim's arms.

What listeners say about Dating a Saint

I have enjoyed this series very much. McDonald's humor is great. Her timing is spot on.
It's not often I listen to a book with a smirk or an out right laugh through out the story.
Well done!
Anne Johnstonbrown does a wonderful job with her narration.
Characters come to life with her voice and inflections. Well done.
Thank you both for the enjoyment.

But it had it's scorching hot moments also. Our heroine comes from a broken marriage because of a cheating cad of an ex husband. oOur hero is married, in name only, but can not leave his wife. The passion between these two is so hot. That's proven by a drunken, on his part, night of passion. Tto bad he doesn't remember it because actions have consequences.

i throughly recommend this book. It's laugh out loud funny as well as tear inducing.

pursing could be fun - getting your desire too

Lauren and Jim were fire ready to spark and the slightest chance of ignition. They were both wanting but not satisfying. Jim kissed her with a reach to her soul and then nothing. He just would nothing. Lauren was once divorced and had a mother that was the very definition of pain in the arse. She was a nightmare. Lauren was more than anyone could see or believe. She had skills not even her closest friends knew about. She desired one man and how better to get him then have her friends send her on dates she don't want to be on. I had lots of fun with the read and a few of the scenes were just priceless.

Anne Johnstonbrown's narration was just the touch needed to bring Lauren's story to life. She gave all the character the own special uniqueness. This being the third in the series just allowed for you to get that much more familiar with her work. She most certainly did this story justice.

I was looking forward to Lauren story, and ultimately it was a cute story but did not need to be as long as it was.

The narrator continues to sound robotic at times, but I got used to it by book 3.

Listening adds another bonus to a good story

I enjoyed this story as much as the first two in the series.
I loved the banter between the characters and the chemistry between the various couples being portrayed.
When a married man, James, wants to date Lauren, the saint, Mccarthy, people in their social circle are scandalized. Even if the man's wife hadn't lived with him for 6 or more years and Lauren had never dated since her divorce 7 long years ago.
There is a reason why James had never gone out with anyone other than one date many years ago. Ms McDonald tells the story better than I do, I can only recommend this book to you.

More of the same

Another good offering. The story is as good as ever and is true to the book.

As with the first two books in the series I feel it has been let down by the narration.

Well worth a listen in spite of this.

Never to Late to be HAPPY!!

Would you consider the audio edition of Dating a Saint to be better than the print version?

Loved Lauren. She was such a contradiction, she was so nice and fragile but able to kick butt with the best of them. Who would believe she had several black belts (smile). I would have loved for Jared (her ex) to "learn" more about her fighting skills.My second favorite was Hector. What a loving and caring person. Without him, life for Lauren and Jim would have been different.

What does Anne Johnstonbrown bring to the story that you wouldn’t experience if you just read the book?

She interjected expression in the narration of the book.

Life is a Journey, Never Give up on Happiness!

This was my favorite of the series.

Can not wait for Book 4 to come to Audible! Great narration! Awesome Story line.

Where does Dating a Saint rank among all the audiobooks you’ve listened to so far?

It ranks up there fairly high!! The narrator does a great job bringing the book to life in your mind!

The way I can visualize what is happening based in the tone of the narrator's voice.

Have you listened to any of Anne Johnstonbrown’s other performances before? How does this one compare?

My most favorite is "Dating a Cougar' but this one is still great!!!

Saintly is in the eye of the beholder!!!

There are so many ways this story could have gone that would have been better than a large hunk of a man being pussywhipped. It was really dreadful. Especially the fat shaming of a size 14!?!
If a man that big can't lift a ~150# woman he needs to spend more time exercising.