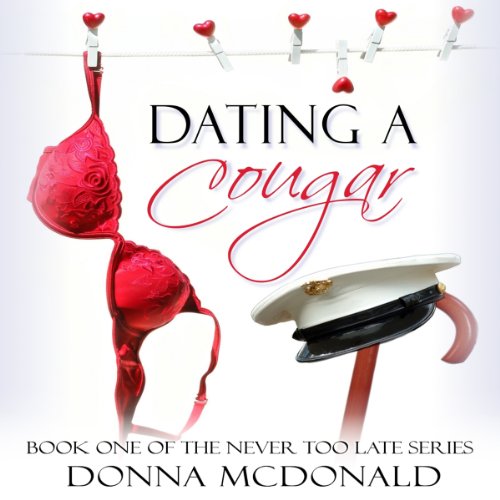 After several decades of looking for true love and never finding it, aging model and lingerie designer, Alexa Ranger, has finally given up the search. A couple of years ago, she got tired of the game completely and just stopped dating. Now friends and family keep her mostly content, so it's shocking at 50 years old to find herself suddenly wanting a sex life again. It's even more shocking to be attracted to a much younger man this time. She definitely thinks Casey Carter is sexy, but not handling her own age well, Alexa just can't get passed their 12 year age difference to even consider a fling. Not that it matters anyway, anything resembling a normal dating relationship is totally out of the question because Casey is related to and living with her daughter's boyfriend.

The very last thing Alexa needs is yet another talk-show-worthy drama in her already complicated life, no matter how amazing Casey's kisses make her feel. For a couple of years, 38 year old medically retired Marine Casey Carter, believed his military injury had made him impotent. Having lost his wife to cancer, he hadn't exactly been worried about the problem. Most days walking with a cane was enough challenge for him. But now that he was ready to move on with his life, he had become more worried when none of the females his cousin brought around held any interest for him. So the last woman in the world he expected to start his engine revving again was the mother of his cousin's girlfriend.

Even at 50, Alexa is drop-dead gorgeous, and his libido certainly keeps reminding him she is the first woman he has wanted in a long, long time. Ironically, the more Casey gets to know and like Alexa, he finds out desiring the older woman is the easiest part. Jaded and cynical about love, Alexa is a difficult woman to convince of anything, but her kisses are all the proof he needs that they belong together. The former Marine decides his next mission is figuring out how to fit himself into her life.

What listeners say about Dating a Cougar

What made the experience of listening to Dating a Cougar the most enjoyable?

This is the first audible book I have listened to. I received a free copy from the author in exchange for a review. It was interesting to listen to the inflection in narrator's voice and get a visual picture of what was happening.

About a third of the way through the book, she really seemed to start putting more emotion into her voice and that made the book come alive!!

I had read this book several times in the past, but when the hero was injured toward the end of the book, I almost cried!! The emotion in the narrator's voice combined with the words really brought that portion of the book to life!!

Based on my experience with this audible book, I may have to get more audibles!

Loved the story. But why does the story HARP on the fact that she was older?? I mean mentioning it once or twice but, give me a break!!! And to make the marine handicapped?? Is that the only reason he felt he could slum with an OLDER successful ex-model?? I hpe not.. BUT... This was still refreshing!!!!!! The later portion was exciting. wish it was a bwwm... Oh well.. Still good story.. KUDOS more please!

This was a really good story about an attraction between a younger man, Casey and an older woman, Alexa. It is a book about mature adults, not an older woman stalking a twenty something man. Adults who have certain insecurities about their she differences and work to overcome them.

I liked all of the characters in this Audio book. They were humorous, snarky, sarcastic, and there was one who was just clueless.

The narration at the beginning of the book started out very monotone. I would advise you not to start listening if you are sleepy. As the book moved forward, the narrator really got into the story. She gave each character his/her own personality.

I read the e-book, which I thoroughly enjoyed. If you prefer audiobooks, you will definitely want to give this one a try. I enjoyed revisiting the book, and could listen as I did my housework, rode the train, etc.

I voluntarily reviewed the audio copy of this book.

I’m not sure I can finish

I never write reviews. EVER.
I’m sure the story is probably good.
However, I don’t think I can even finish this book because the narrator enunciates EVERY. SINGLE. WORD.
It’s so annoying that I’m probably not going to finish the book. I just can’t.

Where does Dating a Cougar rank among all the audiobooks you’ve listened to so far?

Although not my first audio book, it is my first from this author. I read this book when it was originally released and loved it. It starts slow, but get better as the story continues. McDonald writes a very good book and like the written version this ranks as one that I would listen to again.

I love it that the characters are not in there 20s but well established in life with many life experiences (very different for each of them) to draw from. It was great that they did not let the “little things” grow into unnecessary major conflicts.

I liked both Alexa and Casey, they were both mature and confident individuals. The chemistry between them is great and leads to some steamy moments.The supporting cast was lovable and I look forward to learning about them. I love the supporting cast.

Although I found the narrator a bit odd at the beginning of the book, the narration improved as she got into the book. She did a great job with the individual voices and allowing the listener to determine who was talking. Listening to the audio version provided a different view of the events of the book.

I enjoyed both the written and audio versions of the books. There were definitely times when I laugh and there was some sadness but no tears this time around.

Disclosure - I received a copy of this audio book in exchange for an honest review. All thoughts, opinions and ratings are my own.

It was nice to read of romance in your 50s and not 20s for a change. The story was good.
The narrator was irritating. She over annunciates ‘T’. It keeps the reading from being smooth. Won’t listen to another by this narrator. She even did it in the pronunciation of her own name!

While I was thrilled that the main character Alexa was strong, competent and mature, I was annoyed that the title of Cougar was applied to a 12 year old age difference just because the woman was older.

Alexa (50) and her 2 best friends in their 40s were a refreshing and entertaining change from the insipid, weak girls usually featured in romantic novels. Perhaps authors are finally realizing that many readers enjoy stories about women their own ages.

The only thing keeping this book from earning a 5 star rating was Casey's rather controlling and jealous personality. I expected more mature thinking and behavior from a 38 year old combat veteran and widower.

fabulous begining of a series

Would you consider the audio edition of Dating a Cougar to be better than the print version?

What was one of the most memorable moments of Dating a Cougar?

When he uses his cane!

Which character – as performed by Anne Johnstonbrown – was your favorite?

I was not suppose to listen in one sitting??!! haha. It was hard to stop so carried it around with me as I prepared dinner.

This is one of my favorite series in book form and have reread many times, I can see that I will listen to it often as I crochet and want to read at the same time.

I actually love this story the reading was okay but the story is great. I will try the other audio books in the series to see if it was just the way it was read that threw me off a bit.

This was a wonderful book. It was well written and the audio was great, too!

This is the first book in the never to late series. I loved it, the story line is easy but fun to follow as there is a lot to keep you entertained, the characters are strong and have just enough reality about them to make you believe they are everyday type people not that every woman out there would be jealous of a woman in her 50s keeping a model like figure I know I would. But this story makes you smile the women are strong the men realistic that you instantly know who's who and what they are after. Many of us will relate to the problems the characters face and OK they have money well most of them do and there is a bit of american glamour about it but its a fun light read that tugs at your heart so I gave it five stars.
The narrator is good and gives you enough change in tone to hear who is who which is a skill as some books I have listened to the characters all sound a like, so it was nice that all the characters had their own tone.

I loved this book! Was sexy and sweet, and narrated really well! Will be getting more in the series!