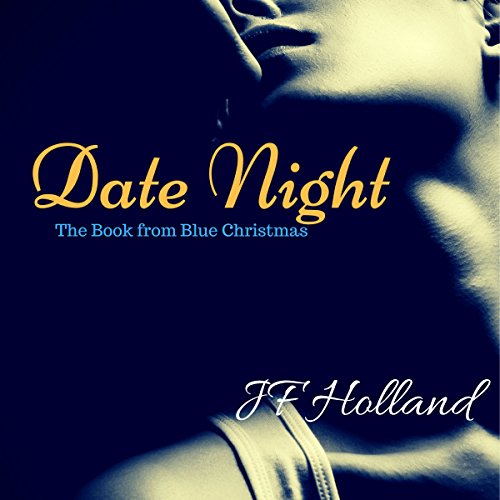 Fourteen-years of marriage, two-children - and Dan and Lauren were now on the rocks.

Date night, his mother-in-law suggested. Only problem was Dan would have to wing it, as he didn’t have a clue how to date his wife.

He wanted to ignite the spark back into their marriage; however, Lauren wasn’t as keen.

Lauren was devastated and confused by the sudden interest Dan was now showing her. Was he playing away from home? That would certainly account for the weird hours he’d been keeping at work.

Was Dan’s guilty conscience the reason he was now trying to get her into bed at every opportunity? Or was he just toying with her?

A new day was coming. Hopefully, Dan was ready for her. Because by the end of the week, her marriage would either be back on track or over and heading for the divorce courts.

What listeners say about Date Night: The Book from Blue Christmas

the characters names threw me since I read a story with Dane and Laurie. Story was really good. thank you

I was so happy to get this book. I have enjoyed it. I really like how the story lets you know that if you have a problem don't run from it. Talk it out , You dont know if the other person the one you love is feeling the same way you do if you keep ignoring the issues you will lose what you love the most . Dan and Lauren make a great couple and I was so happy to see that they was able to work things out and be a family again . This book has a lot of pain but it shares a lot of love also . if you can read it I would recommend this book it was pretty amazing I wasn't to thrilled with the gentleman reading it but his voice kind of grows on ya. lol

You might want to have a tissue ready. This is a very in depth look into what can happen to a marriage when something catastrophic happens. The way the characters interact all thru the story you know something happened but you don’t find out until the almost end what that is. Once the couple work thru the issue they institute a date night to keep things interesting in their lives and it sounds fun. JF Holland covered real issues that can happen to people who have been married for years and the importance of communication being the key to get past it. I really enjoyed the book and would recommend it to everyone. The narrator did a very good job building the frustration level of both characters and the sorrow that follows.

I empathized with Dan's situation. He got caught up in life and missed out on the little important things. I liked that when he realized his mistakes he made time to fix the problems and work on a better relationship with his wife and family. I don't think the extra child was necessary because you can't replace one lost. I voluntarily listened to a free copy of this and am giving an honest review. The narrator did a good job.

A good romance novel,narration could be LOT better

The story begins with a troubled marriage that's on the verge of breaking and an oblivious husband.
It continues with how the husband (Dan) realizes the truth about his marriage and makes a plan on saving his marriage, to stop his wife- the love of his life- from leaving him with their 3 beautiful children.
The intimate scenes are written very well and feel very real. One can see that J.F. Holland has put in a lot of effort in the minute details.
This book speaks about a sensitive issue and the author has handled the situation very gracefully.

It was very easy to visualize and feel what was happening in the story, and I think that's rare.
You would definitely need a box of tissues during the end.

The only part I did not like about the book was the narration.
It was extremely cringy when John York tried to narrate as a little girl wherever the book demanded.

Other than that, I would definitely recommend this book to anyone who likes a good romance book.

I love this story, and it definitely carries you away to a place that does not exist. I wish it were as easy as this story makes it seem to repair a damaged relationship. Overall a good story and shows that couples do need to communicate and work out their issues together.

Well written and the characters are well created. The story is good and gets to you. Funny at parts but very sad too.
This is not the day to day love story you know boy meets girl, fall in love beak up solve the problems and live happy ever after.
They are married but the marriage is crumpling. He is making effort to fix it. How it works out and why they are having problems you have to listen. just make sure you have some tissues near by when you get to the sad part.

I received a free copy of this audiobook in exchange for an honest review. I thought it was great. I liked that it was a realistic portrayal of a marriage. it was funny, sad, sexy. It definitely made you go through all the ranges of emotions. This was my first book I've either heard or read by this author, but definitely not my last! - LHM

I decided to listen to this book because it was about a couple who have been happily married for many years but now their relationship is on the rocks. I thought they were just taking each other for granted but it turned out that there was another reason as well. Dan and Lauren were both likable and relatable characters, and it was an interesting storyline. John York did a good job bringing this story to life. I received this audiobook at my request and have voluntarily left this unbiased review.

This story was a great listen. John York did a great job of bringing Lauren and Dan’s story to life. Great, heartwarming story about a married couple who’ve lost themselves.

This storyline is a honest account of most relationships that are over 10 years. It can get stagnant especially when you go through so much trauma. It’s very brave of this author to take on such a book. I really enjoyed it. Well written characters. With a humours performance from John.

I loved listening to John York, he was a great narrator.

I have say I so enjoyed this book. Get a glass of wine or cup of tea, it is like having a good friend come around.
Trying to get there marriage back on track after children and been married for 14 years. The romance and fun has gone.
This book made laugh and cry , loved it

JF Holland is an author I turn to when I want to give my brain a break, when I want something just nice and easy to digest, she delivers here. The book from Blue Christmas gave me the impression that the story was linked to something else, but it works well as a stand alone, it's high steam but should contain a trigger warning for still birth.

I was given a free copy of the audiobook version of this story in return for an honest review and here it is! This story is fantastic. It is about a couple who have been married for 14 years, suffered a loss and grown apart as a result. The husband decides to try to rekindle the spark in their relationship. The story had me laughing and crying at parts. The narrator told the story beautifully, though I did find the daughters voice a bit annoying 😂. I’ll definitely look out for more from this author. A great, feel-good listen.

I really enjoyed this, I found myself cheering the characters on, laughing out loud & crying too. This book has it all.

This is my first JF Holland book and I thoroughly enjoyed it. It was a well written sensual read that made me both laugh and cry.
I found John York’s performance on point and very easy to listen to. I was fortunate to receive a credit for this book.

Fourteen-years of marriage, two-children and were now on the rocks.
Date night, his mother-in-law suggested. Only problem was he would have to wing it, as he didn’t have a clue how to date his wife.
He wanted to ignite the spark back into their marriage; however, she wasn’t as keen.
great book make you think

Emotional rollercoaster of a read

This book isn't my typical read but I'm glad i listened to it. I can imagine many couples could relate in some way to this story and that is what is so great about it, it feels like you are listening to one woman's diary. It is my first book by this author, my first audio book and i would completely recommend. Loved the narrator, he did an amazing job and made me stop and listen, made me laugh in places and feel like i was listening to a friend tell a story.

This book is completely heart wrenching, funny and embarrassing (for the characters). I sat in my living room listening with a smile, a laugh and a cry. A very good read, with very good characters and an even better story line.