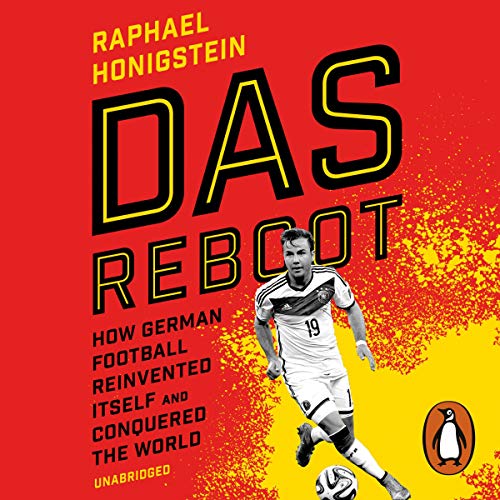 "Football is a simple game; 22 men chase a ball for 90 minutes and at the end, the Germans always win." (Gary Lineker)

On 13 July 2014, World Cup Final, the last 10 minutes of extra time: Germany forward Mario Götze, receiving a floated pass from his international teammate André Schürrle, jumps slightly to meet the ball and cushion it with his chest. Landing on his left foot, he takes a step with his right, swivels, and in one fluid motion, without the ball touching the ground, volleys it past the onrushing Argentine goalkeeper into the far corner of the net. The goal wins Germany the World Cup for the first time in almost twenty-five years.

In the aftermath Götze looks dazed, unable to comprehend what he has done.

In Das Reboot, journalist and television pundit Raphael Honigstein charts the return of German football from the international wilderness of the late 1990s to Götze's moment of genius and asks: how did this come about? How did German football transform itself from its efficient but unappealing and defensively minded traditions to the free-flowing, attacking football that was on display in 2014?

The answer takes him from California to Stuttgart, from Munich to the Maracaná, via Dortmund and Durban. Packed with exclusive interviews with the key protagonists, Honigstein's book lifts the lid on the secrets of German football's success.

What listeners say about Das Reboot

Loved this book. A must for every football fan. The storytelling was impressive and audio version was very good.

Ok firstly so what if the narrator pronounced a few of the names differently, his pronunciation of other German words were fine. Even if they weren't it still would not have changed the fact that this is a very enjoyable listen, full of anecdotes, facts and history about the modern era of German football.

Listening through the build up to the 2014 World Cup it isn't surprising that they did so well and why England struggle.

What I found most intriguing was the in depth explanation of the German youth elite training academies. Particularly because my son is training in one as part of his school curriculum, but also because of the facts and figures and motivation behind it to develop a national footballing culture.

I purchased this 5 years ago and have just turned to it now. It holds up very well. The passage of time since the events leading up to the 2014 WC win somehow adds to, rather than detracts, from the experience.

The approach taken by the author is not strictly chronological but changes perspectives and time-periods, broken up by a detailed account of Germany's progress in the 2014 WC. This structure helps with pacing and variety.

Yes, Germany fluffed the 2018 WC, but this just goes to show how success is never final; failure is never fatal.

Great charting the progress but would have liked more on the influence of coaches like Rangnick. An excellent story nonetheless with a good balance between the emotional and tactical elements

An outstanding book, extremely well read that I found hard to leave when I'd finished it. Recommended.

This shows how far English football is behind everyone

This book demonstrates why the England national team is so far behind every body else on the national stage. A superb listen

Yes, very in-depth account of the troubles of recent German football, by a great writer.

A good bit. It's somewhat a disgrace that the awful mispronunciation of not only German, but Spanish, Italian, Portuguese, etc., names and words were allowed to remain in this book. Lothar Matthaeus' name was especially butchered, with about three different pronunciations in as many sentences.

Fantastic book/audio book.Would definitely recommend. If you're a fan of German football then what's not to like?!

Most insightful. Why have we not done this in England? Thought that the narrator did a great job of delivering the story.