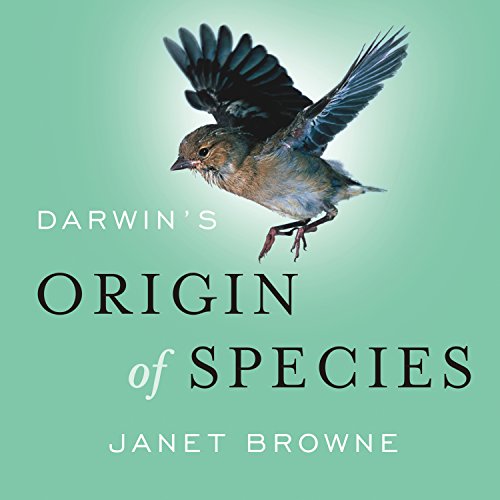 Charles Darwin's foremost biographer, Janet Browne, delivers a vivid and accessible introduction to the book that permanently altered our understanding of what it is to be human. A sensation on its publication in 1859, The Origin of the Species profoundly shocked Victorian readers by calling into question the belief in a Creator with its description of evolution through natural selection. And Darwin's seminal work is nearly as controversial today.

In her illuminating study, Browne delves into the long genesis of Darwin's theories, from his readings as a university student and his five-year voyage on the Beagle, to his debates with contemporaries and experiments in his garden.

She explores the shock to Darwin when he read of competing scientist's similar discoveries and the wide and immediate impact of Darwin's theories on the world. As one of the launch titles in Atlantic Monthly Press' Books That Changed the World series, Browne's history takes readers inside The Origin of the Species and shows why it can fairly claim to be the greatest science book ever published.

"It may seem peculiar to write a biography of a book, but Darwin's Origin of Species is certainly a worthy subject....This excellent introduction is highly recommended for all...who want to better understand the heated debates that this book still causes today." (Publishers Weekly)

What listeners say about Darwin's Origin of Species

Janet Browne is an accepted Biographer of Charles Darwin and this work gives a separate view of his most famous work. I found listening, rather than reading was a good thing and it only took me a surprisingly short time to run through the first time. I recommend it to those who like me find themselves driving or doing a mindless task and can listen. This is worth the exercise, even at home in front of the fire during a cold winter night, why not!!!

In this, the 200th anniversary of Darwin's birth, you should be on the lookout of materials that remind you how much Darwin (and his circle) and Darwin's work (and that of his circle) fundamentally think about the world around us. A profound change indeed, a good change too. There are a number of lengthy good biographies of Darwin around, and articles aplenty in podcast circles due to the anniversary. But this book does an excellent job, in a short span of 4-5 hours of listening (less than a week for sure) in giving you the particulars you need to know. It is very well read and moves along at a nice pace so that you don't get bored. I did get the sense that the narrative got alittle lost in the last 30-45 minutes, when the author was trying to detail how the world changed later on. That is the only reason I dropped a star from the rating. It may just be that the changes in our attitudes, and that of the scientific establishment, were so significant that whatever part of the book that was - perhaps 40 pages - just couldn't do it justice.

I have done several bios of books, and this was one of the best. I felt like the book, content and author (Darwin) were handled objectively. I learned a lot about a game changing or rather world changing book, and the audio media worked very well.

This sounded interesting and possibly could be if abridged and read better. It works its way slowly and without much passion through one of the most exciting discoveries in history, in a way which suggests it's aimed either at the very young or the very dimwitted. The narrative fails to catch the imagination and is constantly interrupted by superfluous detail such as dates of birth and death of all the characters. Worst of all, the narrator has a flat, staccato voice which sounds like a clockwork Dalek about to run out of power. A huge disappointment and there must be better books out there to introduce Darwin and his work.