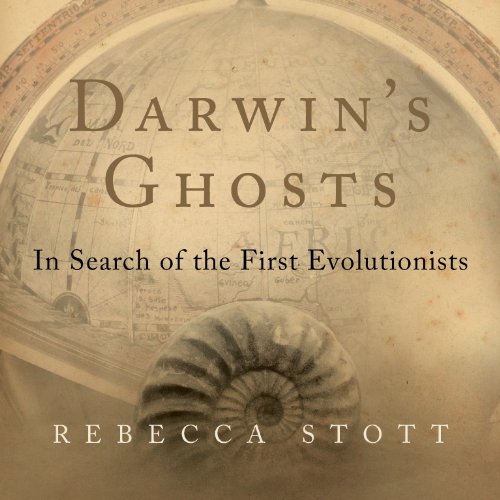 Christmas, 1859. Just one month after the publication of On the Origin of Species, Charles Darwin received an unsettling letter. He had expected criticism; in fact, letters were arriving daily, most expressing outrage and accusations of heresy. But this letter was different. It accused him of failing to acknowledge his predecessors, of taking credit for a theory that had already been discovered by others. Darwin realized that he had made an error in omitting from Origin of Species any mention of his intellectual forebears. Yet when he tried to trace all of the natural philosophers who had laid the groundwork for his theory, he found that history had already forgotten many of them.

Darwin’s Ghosts tells the story of the collective discovery of evolution, from Aristotle, walking the shores of Lesbos with his pupils, to Al-Jahiz, an Arab writer in the first century, from Leonardo da Vinci, searching for fossils in the mine shafts of the Tuscan hills, to Denis Diderot in Paris, exploring the origins of species while under the surveillance of the secret police, and the brilliant naturalists of the Jardin de Plantes, finding evidence for evolutionary change in the natural history collections stolen during the Napoleonic wars. Evolution was not discovered single-handedly, Rebecca Stott argues, contrary to what has become standard lore, but is an idea that emerged over many centuries, advanced by daring individuals across the globe who had the imagination to speculate on nature’s extraordinary ways, and who had the courage to articulate such speculations at a time when to do so was often considered heresy.

With each chapter focusing on an early evolutionary thinker, Darwin’s Ghosts is a fascinating account of a diverse group of individuals who, despite the very real dangers of challenging a system in which everything was presumed to have been created perfectly by God, felt compelled to understand where we came from. Ultimately, Stott demonstrates ideas - including evolution itself - evolve just as animals and plants do, by intermingling, toppling weaker notions, and developing over stretches of time. Darwin’s Ghosts presents a groundbreaking new theory of an idea that has changed our very understanding of who we are.

What listeners say about Darwin's Ghosts

A great story wrecked by the wrong reader

Would you try another book written by Rebecca Stott or narrated by Lisa Renee Pitts?

I would certainly try another book by Rebecca Stott. The extent of her research for the subject of Darwin's philosophical forbears must have been extensive. I have already ordered one of her other titles.

What was one of the most memorable moments of Darwin's Ghosts?

The chapter on Leonardo da Vinci gave a wonderful exposition of the genius of the man. There was so much to learn about him and the part he played in the search towards explanations for how life evolved, and what the fossils in the rocks might be telling us.

Who might you have cast as narrator instead of Lisa Renee Pitts?

Stott is a British born academic journalist. Casting an American actress with no feeling whatsoever for foreign language and pronunciation was a serious error and distraction. I cannot think why she was chosen. I think the book merits a classic English actress, Juliet Stevenson for example. I thoroughly enjoyed her reading of The Paying Guests.

Was Darwin's Ghosts worth the listening time?

Fortunately there is so much to engage the interest and attention of the reader in the subject material of Darwin's Ghosts that I survived the heavy American accent of Pitts with the tortured attempts at pronouncing all the French, Italian, Latin names.