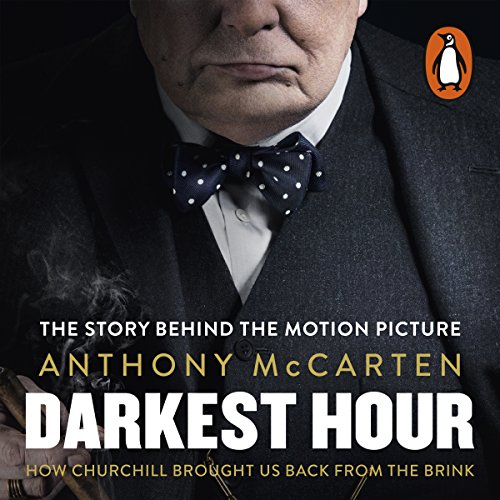 How Churchill Brought Us Back from the Brink
By: Anthony McCarten
Narrated by: Sean Barrett
Length: 6 hrs and 40 mins
Categories: Biographies & Memoirs, Political Figures
4.5 out of 5 stars 4.5 (21 ratings)

Penguin presents the audiobook edition of The Darkest Hour by Anthony McCarten, read by Sean Barrett.

From the prize-winning screenwriter of The Theory of Everything, this is a cinematic, behind-the-scenes account of a crucial moment which takes us inside the mind of one of the world's greatest leaders - and provides a revisionist, more rounded portrait of his leadership.

May 1940. Britain is at war, European democracies are falling rapidly and the public are unaware of this dangerous new world. Just days after his unlikely succession to Prime Minister, Winston Churchill faces this horror - and a sceptical King and a party plotting against him. He wonders how he can capture the public mood and does so magnificently before leading the country to victory.

It is this fascinating period that Anthony McCarten captures in this deeply researched, gripping day-by-day (and often hour-by-hour) narrative. In doing so he revises the familiar view of Churchill - he made himself into the iconic figure we remember and changed the course of history, but through those turbulent and dangerous weeks he was plagued by doubt and even explored a peace treaty with Nazi Germany. It's a scarier and more human story than has ever been told.

What listeners say about Darkest Hour

fascinating insight into the political background of the events leading up to the outbreak of WW2 as well as the critical first few months of hostilities. Thank you Sir Winston for your determination and dogged will which saved the free world from Nazi domination. The narrator was excellent and added drama to a well told account of the unfolding events.

Enjoyed the insights into his formative years and their repercussions for his behavior pattern. Particularly like how the author delved into these events and how they affected his speech writing abilities. Churchill is humanized, yet his impact on history isn't diminished.

I loved The Darkest Hour by Anthony McCarten, the background to Churchill's beginnings as the new Prime Minister in May 1940 when Hitler was advancing through Europe and decisions he had to make as troops were being evacuated from Dunkirk. It is how he overcame the pressures from Halifax and Chamberlain to attempt to negotiate with the Italians, and how Churchill became the Churchill that took us through the war. Brilliantly read by Sean Barrett, hope you enjoy it.

Churchill’s humanity If the film is as half as good as this book it’s going to be a corker!!

Insight into such a hard time

Well researched and written, fine narration, Churchill made some very difficult choices. The author gives good analysis of the three monumental speeches that Churchill made in the first three months of his premiership and the sources of his oratory. He also gives some detail of Churchill's eccentricities which brought a smile to my face. The author draws some interesting conclusions, was Churchill prepared to negotiate a peace treaty with Hitler or was he simply trying to keep Halifax and Chamberlain on side? Highly enjoyable listen

Good accompaniment to the film

If you've watched the film then this is a great addition to pad out the story further.

A book that truly defines "success as the result of many failures" Simply a great book.

It says on this input screen "optional" but then won't let me submit without minimum 15 words. Book was excellent feedback system needs work and gets 1 star

I thought this book us an amazing example of a leader that through unbelievable pressure put himself 2nd and the great good of the nation first!! amazing

After seeing the film, the book lived up to my expectations, Brilliant! In Churchills own words; "So much is owed by so many by so few", he being one of the few!

This is a really good read/listen. Factual and exciting. Beautifully narrated, bringing this incredible true tale alive. Will read a fourth time, no doubt....