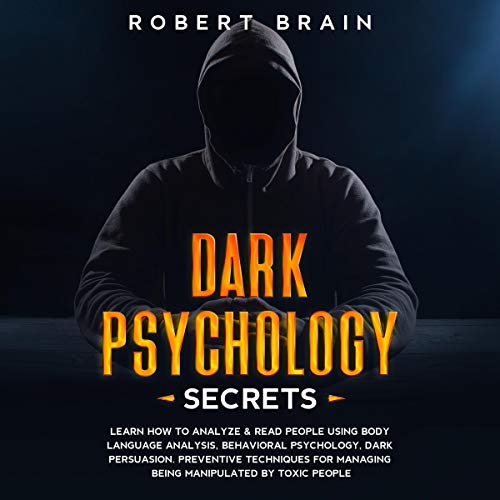 Have you ever watched someone expertly weave a tale of lies and manipulation so skillfully that you could not believe how they were able to do so without a single inkling of guilt? Have you watched on as someone seemed to speak with a silver tongue, almost magically compelling those around them to do seemingly anything?

When they finish, no matter how much they hurt the other party or how selfish their actions, they do not seem to care one bit.

Those who utilize dark psychology can put aside their feelings. They can keep from feeling guilty as they go against the best interest of the people involved. They can tap into the darkness within humanity with ease - the darkness that exists within every person that gives them the potential to be a predator. While this potential is within every individual, surprisingly few ever give in to its influence. Very few people legitimately want to be defined by their propensity for dark behavior - they can keep that darkness in check.

Those who have the potential to use dark psychology are often so charismatic, so enticing, that the victims that feel drawn to them, much like a moth to a flame, do not see the toxicity that lies within the very interactions with these people. They will seek to get closer and closer to the enigmatic user of dark psychology without understanding why they feel compelled to do so until they realize they are burning.

It seeks to understand the motivations behind such heinous actions, as well as the various techniques that those who utilize dark psychology tend to favor. Dark psychology analyzes each of these concepts, recognizing the inherent power involved in the act of controlling someone else. It requires a comprehensive understanding of the inner workings of the human mind to control another person, whether through manipulation or persuasion, and that understanding is what those who study dark psychology seek to gain.

Those who have a natural tendency toward utilizing the art of dark psychology, typically characterized by the dark triad of narcissism, Machiavellianism, and psychopathy, seem to have this understanding of how people work inherently - they do not have to spend the time actively studying the reactions of those around them and following their instincts. They may not even be aware of the tactics they are using at the moment, simply following their instincts deeper and deeper into the darkness within them without remorse or guilt for the collateral damage they cause along their way.

While dark psychology is inherently controlling of other people simply because it either sways or forces someone to do something that the controller wants, it is not necessarily evil. It is entirely possible to dip your toe into the darkness within you, tapping into the ability to understand and persuade others without causing harm.

In this book, you will learn more about:

This audio-book is an excellent way to learn

The audio-book is highly recommended to everyone, young or old, who wants guidance in learning how to speak to others. If you already think you learn, it will help you strengthen your relationships.

This audio-book has altered the way I communicate with others. This helped me to realize that each person sees and listens to me from their own experiences in life and that I, in effect, hear them through the lens of my own history.

I like that, Manipulation and Dark Psychology are a lot of info! This book will give an advantage to the peruse so they can watch out for these pessimistic people.

This is the best audible information knowledge

This audio-book provides data on how these people function. So you realize what's on the store, I 'd prescribe this to any person who starts and needs to get to know the nuts and bolts.

This audio-book really help me take the next step

This audio-book has unpretentious impacts So much information about how individuals will control their exploited minds in general. Interesting and startling to the maximum! Methods because you can learn easily. Psychology control resistance step by step is great another.

This audio-book is the perfect guide for everyone

An incredibly simple and compact method for starting to find out about dim brain science and its many strategies. The author worked fantastically with keeping the peruse entertained the whole time.

I think there are some very interesting things about this audio-book. Knowing how to talk is the best trait you can have and I retract with people, which is seriously lacking in today's world. Decently experienced people can recognize each of these points as stuff that you already know, but we can all continue to brush up and build on our skills.

This is a great inspirational audio-book

I highly recommend this audio-book to everyone looking to develop their communication and other ability as we communicate with people every single minute of the day at work or at home.

I actually redeemed this audio-book

I began listening to this audio-book and it's really helpful already. I was especially shocked at the huge amount of work that has gone into this boo

This audio-book is highly recommended to everyone

For anyone who deals with people in a job situation or everyday encounters, I recommend this Audio-book. This offers a lot of insight into the way people work