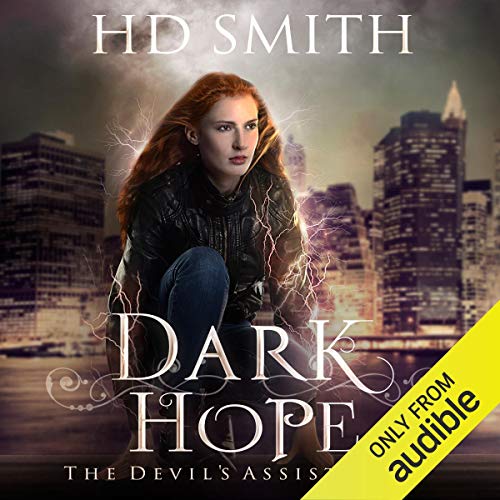 Claire, the Devil's assistant, knows very little about the world she was dropped into five years ago, when she inherited her mother's unpaid debt to the Demon King. She certainly didn't expect to be a contender for the Fallen Queen's throne, a target for the Druid King's mafia, or a suspect in the murder of Junior, the Devil's oldest hell spawn.

In a last ditch effort to save her life and get out of her deal with the Devil, she sets out to solve Junior's murder only to be taken prisoner by the four most dangerous immortal hell spawn alive.

Not to be out done, the Pagan Queen Mab, claims Claire for entering her realm uninvited. She has an old debt to settle with her brother the Devil. Taking Claire from him after losing her years ago is just icing on the cake.

Will Claire win her freedom, and save herself from the Devil? Or be trapped by Mab forever?

What listeners say about Dark Hope

Lauren Fortgang Can Do NO Wrong!

Lauren Fortgang is the narrator? Heck yeah sign me up!

Dark Hope started out as a kind of light UF story that turned into a complex story that had me wondering where the roller coaster was going to stop. I liked the fact that I couldn't easily figure the plot out by chapter 5 like other books I've read. Dark Hope is an audio you need to listen carefully to because you can find yourself lost if you check out from time to time. A lot of plot twists happen.
What Didn’t Quite Work For Me

I actually took a break with only 2 hours left in the audio because I was as lost and pissed as Claire and just wanted to know what the heck was going on. After I took a break and came back to Dark Hope I was glad I did.
Will I continue the series?

Yes. I enjoyed the plot and Claire enough to give a second book a go. Especially if it's on audio and narrated by Lauren Fortgang. Plus I NEED to know who was taking Claire home at the end. H.D. Smith you left me hanging. LOL

Lauren. Freaking. Fortgang. Seriously if I see her name as the narrator I'm going to give it a try. I could listen to Lauren read the phone book. Lauren nailed Dark Hope's 1st person POV through Claire.

Wanted to love it (loved the premise)...but

Ok, I think I might be in the minority with this book. I struggled to finish listening to this because the main character just GOT ON MY NERVES. She was so whiny and seemed to accept the abuse that all the factions: Boss, Druids, Pagans, etc wanted to heap on her. Maybe this is me just preferring more strong characters that are a little more snarky and who attempt to fight back against the bad guys. Her character is probably more realistic (if you were in that situation), but for some reason I didn't sympathize with her like I have with other "underdog" characters.

If you are into YA books you will probably like this as their is a lot of angt for boyfriend that she discusses (way too much) throughout the book that plays really no part in the storyline. If this is meant for an adult audience then I think the main character needs to grow up a little more (which, to be fair, she did appear to do in the last couple paragraphs of the book).

What did you love best about Dark Hope?

The way the story unfolds and the unexpected twists

What was one of the most memorable moments of Dark Hope?

It took a couple of chapters for me to get into this book, but once I did I didn't want to stop listening!!! I finished it in 2 days.

This is the only book by this author on Audible and I really hoping there will be more to this series soon. The story really draws you in and has so many turns. When I first bought this book I thought it would be a light probably funny read, but it's not that. You really feel for the main character and all she goes through in this book.

Would you listen to Dark Hope again? Why?

I loved reading Dark hope and was thrilled when the audio book was released. I have listened to it twice now and it will definitely listen again!

I love a book that pulls the reader in instantly and Dark Hope does. H.D. Smith has created a fantasy world that overlays the real world in a cohesive believable way. The protagonist, Claire, is both smart and strong but she has been dealt a raw deal. I love the way she kept her head and solved problems, learning to use her emerging powers. I felt her hurt and betrayal; my heart ached for her each time she learned a new truth. The action never slows or stops. The ending was fantastic--everything was tied up perfectly. I think it would be a spectacular movie!

Dark Hope is told in the first person from Claire's point of view and Lauren Fortgang captured her personality perfectly in my opinion. She performs each character in a unique, believable way.

H.D. Smith has woven a compelling urban fantasy and Lauren Fortgang brings it to life beautifully. Don't miss this one!

This is such a fast book. Something is always happening and it is not predictable at all! Fun and the narration is great. Would recommend.

What made the experience of listening to Dark Hope the most enjoyable?

The story was interesting and different...fairly unpredictable, too.

What does Lauren Fortgang bring to the story that you wouldn’t experience if you just read the book?

She's one of my favorite narrators, so I would have to say her contribution certainly was a benefit to the story.

I normally love books with a good bit of romance, but I was surprisingly IN LOVE with this book even with the very small amount of romance! There were innuendos for days about a relationship though! It was pretty awesome to not have a full romance to cloud everything else going on in the book!
The story was GREAT, and kept me completely interested! The characters were fun and pretty amazing. Claire was bada$$! At first I thought she may be a character I would hate, but she turned it around as the book progressed and took charge!! 💪🏼👏🏼
I highly recommend this book!

Can't wait to listen to the rest of the series! Enjoyed the narrator. Love the story!

It's written in a way that everything is revealed and explained as you go. Usually an ok style to read, but we really needed a bit more of a base, a background. It was frustrating to not understand how she got where she was, why, and how the world around her worked. But, it was still very interesting and I did enjoy it. I just purchased the second book, we'll see how that one pans out.

A bit of a struggle

It was hard to warm to the main character Claire as her life seems to go so fast. You want to go on her journey but you don't know where it started from. It would have been nice if the book warmed you to the character before the main story started so you could feel excitement, empathy and sadness.

There are good parts to the book and you certainly see the devil and his children in a new light.