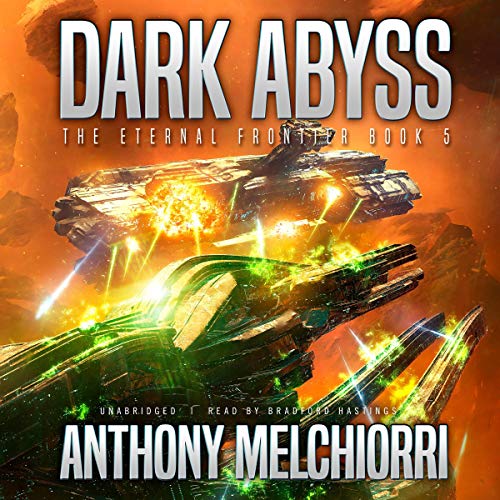 An unstoppable force is headed toward Earth with weapons far beyond humanity’s capabilities.

The Solar Republic of Earth faces imminent destruction at the hands of the maniacal Collectors. In a desperate bid to stop them, Commander Tag Brewer leads a strike group of SRE warships deep into enemy territory. They seek to strike a devastating blow and free the countless beings who have been enslaved by the Collectors. But Tag fears they may be headed into a trap.

Complicating their mission, they discover an alien race that may be even deadlier than the Collectors. Tag and his crew soon find themselves mired in a vicious conflict beyond anything they had anticipated.

And it is not just Tag and his strike group whose lives are in jeopardy. The outcome of this conflict will determine the fate of humanity and every other free race.

Tag must call on old and new allies if the SRE has any chance of survival in this thrilling conclusion to the Eternal Frontier series.

What listeners say about Dark Abyss

The series wasn’t bad early on. But, I feel like it got progressively worse, with new species introduced that just weren’t believable and that didn’t add much. The non-human survived were all so much smarter, yet they couldn’t seem to accomplish much. Then, with a couple hours left in the book, the humans just happen to come up with a plan... there was no special worth required, nothing special they had to accomplish first. It makes you wonder why they had the earlier books... why not just skip all that and then defeat the enemy? It just didn’t flow well.

A Thrilling Story Aimed at Your Heart

A great conclusion with some wonderful science!

One of the biggest things that draw me to Tony's writing is his inclusion of realistic scientific principles. Given he is a doctorate in bioengineering, it is really easy to see his passion shining through in his works.

Being able to tag along (see what I did there?) for the final entry in the series was a great journey. All of my favorites were brought along for the ride but I will say that Alpha continues to be one of my absolute favorites with Coren coming in a close second. This was a wonderful conclusion to a very intriguing series.

This has been a most kind thing. Very great series! I couldn't stop listening! THANK YOU!

Congratulations Mr. Melchiorri a great book and a great series. Overcoming differences and succeeding is a worthy pursuit. Seeing the prejudices of the characters fade and a diverse team form and work together for the good of all was heartwarming. The ending felt good.
Thank you, I look forward to listening to more of your books.

I throughly enjoyed this conclusion as well as the three other books in the deries. I really enjoyed the narrative and would gladly listen to thiduo again.

love this serries and as usual he knocks it out of the park. great endinh but still leaves you wanting more.

I listened to the entire series this last month and really enjoyed it. This was a great wrap up book filled with interesting twist and turns and a solid conclusion.

This series is predictable, and childish. Bottom line is it is pathetic for a space opera, mil/scifi type story. This author seems to write stories like his readers are mentally challenged! It is abominable. Plus the author is not good at communicating his ideas and mental thoughts, images, and what not through written language so the reader will perceive what the book is saying. This wanna be author writes a bunch dribble, uses some theoretical tech and magic words, throw in a character name or two and he calls it a book. How can you readers give this garbage 5 stars? Those that do should stick to crayons and coloring books. It is more your speed.

The story seems to be concluded but maybe another book? I really enjoyed the series and the characters. The betrayal at the end was so unexpected. Tag really had a talent for winning people over to his side. I hope that alpha is back up and running maybe with upgrades. Hopefully the planets are going to unite and become a alliance sharing technology.

You have to listen to it

The least good of the series

I felt the story lacked the excitement this series of books began as.
it's started as an adventure into the unknown, but stalls and returned to the beginning all rather lazily.