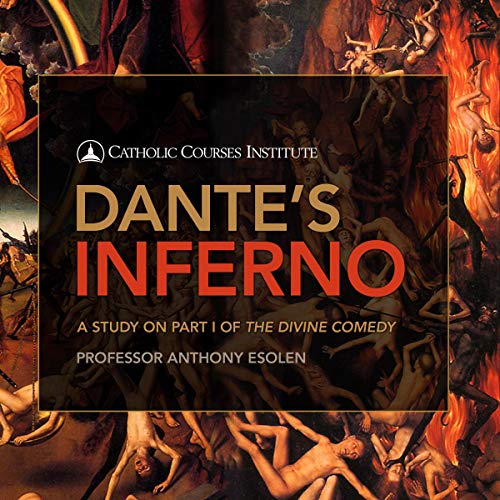 The Greatest Poem Ever Written

Dante's The Divine Comedy can rightly be called the greatest poem ever written, praised through the ages by a pantheon of writers and scholars. Romantic poet William Wordsworth (1770-1850) referred to Dante's crowned "visionary brow". Irish novelist James Joyce (1882-1941) said, "Dante is my spiritual food!" Pope Benedict XV (1854-1922) called Dante "the most eloquent singer of the Christian idea". Even the 20th century literary critic T.S. Eliot (1888-1965) famously wrote that "Shakespeare and Dante divide the world between them, there is no third."

Yet today this great poem is often dismissed by modern scholars for its unabashed Catholic theology and deep spiritual vision. Shrug off the unfounded disdain of these skeptics, and discover for yourself the true grandeur, Christian nature, and sheer artistry of Dante's The Divine Comedy.

Just as Dante needed Virgil to lead him through the bowels of Hell, you also need a true and trustworthy guide. Dr. Anthony Esolen serves as your Virgil in this course on the Inferno, the first canticle of The Divine Comedy. An expert who has taught Dante to college students for more than 20 years, Professor Esolen is also the preeminent modern translator of the entire Divine Comedy from the original Italian.

The Nine Circles of Hell

With Professor Esolen you will enter the terrible gates of Hell and progress level by infernal level to its diabolical depths. Professor Esolen places a special emphasis on the drama of the poem, leading you through each canto in succession. Along the way, you will learn:

Professor Esolen will more than satisfy your curiosity about Hell and the fate of the damned. He will reveal in all its starkness the horror of sin and awaken in your heart a longing for divine love.

What listeners say about Dante's Inferno

Thoroughly enjoyed listening to the background history, made Dante much more attainable! On to Purgatory!

The Punishment is the Sin, Stripped of its Glitter

In his lectures on the Divine Comedy Professor Timothy Shutt treats the poem primarily in terms of literature and history. That makes sense, of course; as a secular teacher at a series of secular institutions, Shutt can but skirt the edges of theology. Professor Anthony Esolen works under no such proscriptions and, right at the beginning of these lectures, states the obvious: the Divine Comedy is deeply, inescapably theological. So, for example, while Shutt stands flabbergasted at Dante’s presumption in counting himself among the greatest poets who ever lived (Canto 4), Esolen offers a theological insight. When Homer hails Virgil as greater than himself, then Virgil invites Dante into their charmed circle (implying that Dante is even greater than he is) this isn't chutzpah on Dante's part. What’s being ranked aren’t the poets themselves but their subject matter. The founding of Rome, Esolen points out, is a greater subject than the siege of Troy, while Dante's ultimate subject, the vision of God, is infinitely greater than the founding of Rome. This isn’t to disparage Professor Shutt’s work; I’ve enjoyed his recordings for years and hope I will for years to come. Nor does Esolen completely ignore artistic merit or historical background (where Shutt cringes in politically correct discomfort at Dante's consignment of Muhammed to the ring of the Bringers of Discord, Esolen explains the Medieval belief that, denied a bishopric, Muhammed founded his own religion in revenge). It’s a matter of each teacher’s emphasis. Taken together, Esolen’s theological insights (like the one borrowed for my title) and Shutt’s literary and historical context give a more fully rounded understanding of a poem that, as Esolen says, is really about everything. Of course, “everything” includes love, hate, sin, death, life, medieval theology and references to late 13th Century Florentine politics. One reason, no doubt, why Professor Esolen recommends reading the cantos discussed in each lecture before listening. It’s a practice I can’t recommend too strongly, either (I used Clive James' fine version, read by Edoadro Ballerini). Knowing you have your own personal Virgil to bridge the intellectual gaps between the medieval and modern mind makes those gaps easier to take in one’s stride. As he says in lecture 4, “Dante was not hampered by our limitations”.

A must have when reading Dante

This is an excellent companion to Dante. Professor Esolen is knowledgeable and a good speaker.

A detailed and exciting analysis of Dante, scholarly, but far from pedantic. I read each Canto once prior to each lecture, then another time after each lecture to great profit.

I can’t imagine a better commentary or commentator!

This helps in understanding Dante's Inferno.

Excellent narration along with the necessary details needed. Helpful if you read along with narrative.