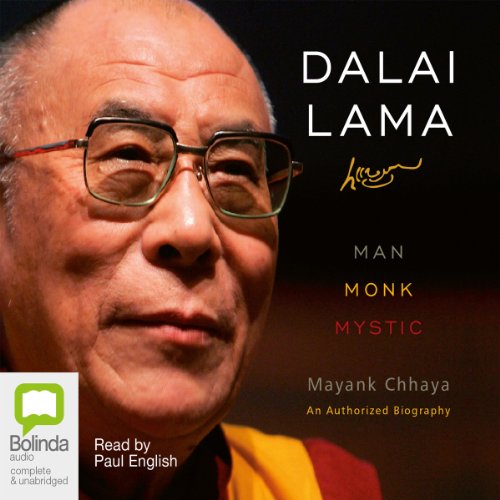 The Dalai Lama is both an extremely important contemporary political figure whose one word could ignite a violent uprising of the Tibetan people against China, and the 15th incarnation of the spirit of Avalokiteśvara, a bodhisattva of compassion who has endured invasions from Mongols and the modern Chinese. His contemporary incarnation is that smiling bespectacled fellow with a Facebook page and millions of followers worldwide. Confused about this remarkable person? Dalai Lama: Man, Monk, Mystic is the book for you.

Performed by the friendly, sturdy voice of Paul English, this is the first authorized biography of the Dalai Lama written by a non-Buddhist, the Indian journalist Mayank Chhaya. This portrait addresses the political struggles the Dalai Lama has inherited as well as his fascinating life story.

An authorized biography of one of the world's greatest spiritual leaders.

Written with the full co-operation of the Dalai Lama, this fascinating, up-to-date biography captures the public persona and enduring mystery behind one of the world's most important spiritual leaders.

What listeners say about Dalai Lama

Just listened to this book over the past week, One of the best books I have ever listened to. The author's thorough research and mastery of the genre makes it a great listen.
the text covers the entire life of the Dalai Lama and includes a critical analysis of the political and social situation as it developed since 1950s. The text reads like narrative but without technical terms. The narration is excellent including voice actors that sound like the real Dalai Lama. The author takes a non-bias viewpoint throughout but clearly empathizes with the Dalai Lama's teachings and point of view without stating so. Thorough political analysis of India and China's difficult relationship then and now. This analysis includes global perspective and the human element. Lots of stories within stories. It also covers social issues in Tibet now, social attitudes toward the leader in exile, and the changing theology of contemporary Tibetan buddhism as it adapts to such ideas as future reincarnations, loss of Tibet etc.
Totally recommend this text.

Dalai Lama: the Struggle for an Autonomous Tibet

This book was interesting for me as a person who has only read a few of the Dalai Lama's works. It was not, however, about him as monk and mystic but primarily as the representative of the political struggle for a free or autonomous Tibet. The book has a very western orientation that almost merges Tibetan Buddhism into a feel-good, secular, tolerant agnosticism ready-made for European and American sensibilities. Apart from the reincarnation of the Lama, almost nothing of distinctive Tibetan Buddhist teaching is included, although we are told that this has been the principal study of the Dalai Lama's life. The concept of nothingness or voidness is mentioned but never discussed. Paul English reads very well and does an appealing version of the Dalai Lama's voice. The Dalai Lama's congenial personality comes across very well, and a reader can understand his charismatic appeal to westerners. But a reader gets almost no understanding of his religious role among Tibetans or of the depth and richness or diversity of Tibetan religious thought and practice. There is no hint of mystical experience in the book, nor any attempt to help me as a westerner really to understand what a living Buddha like the Dalai Lama means for a Tibetan devotee. We learn about the Dalai Lama as a man and political leader in a good way here. I want to know more.

I've very much enjoyed this audio book. It is a fascinating account of His Holiness' life and the context in which he has become one of the world's most important figures. The author, Mayank Chhaya, spent many careful years researching and writing this "official" biography of the Dalai Lama, and this care comes through in this thorough and engaging biography. And, as he spends much time discussing the plight of Tibet within China's political, social, and economic "machinations," the book is also a great primer on Tibet/China relations. In addition, Paul English is an excellent narrator who does a masterful job in rendering difficult Tibetan names and other challenging words. Plus, he does a very, very good job recreating the voice of His Holiness. I would highly recommend this book.

I love this book. The author brings us closer to the man who is HH 14th DL than you could ever hope to be. He sets the stage for this horrible conflict between a simple monk and a militant state set on aggression. The reader brings the voice of both the author and HHDL to life!

I thoroughly enjoyed this book. It provides a very good introduction to life and work His Holiness written in a rich, textured and narrative way. The book is written in an engaging style making it easy to listen to leaving the reader with a deep sense of life, views and beliefs of the Dalai Lama.