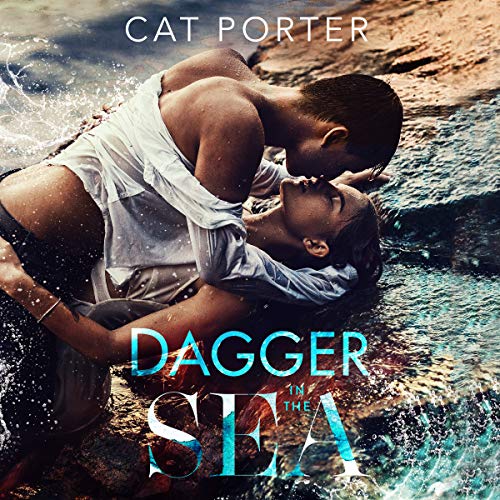 Dagger in the Sea

That’s what they hear

That’s what they whisper

“Turo DeMarco can slice you with that smile”

It’s been known to happen

But the one truth they don’t know could get me killed.

It’s already gotten me thrown into the fire.

I may be the rising dark star of Chicago’s criminal underworld, but I’ve been warned, and I have one chance to make things right, flying halfway around the world to do it.

Until one hot AF heiress gets in my way with an unforgettable kiss and a blast of gunfire, hurling us both into the eye of a Mediterranean hurricane, snaring us in the ultimate high stakes games.

I was always told that actions speak louder than words, and Adriana proved it to me.

Yet there’s one thing that speaks even louder - blood - in my heart, on my hands.

And neither do I.

This Mafia Romantic Suspense novel is intended for mature listeners only. It contains adult language, violence, and graphic sex.

What listeners say about Dagger in the Sea

fabulous story, Brian Pallino was a great narrator-5 stars, Carmen Rose not so much-1 star. Her weird rhythm was so distracting. Had the story not been so good I would have stopped listening after the first chapter.

Listening to The woman narrator was torture

I could not stand the weird rhythm the woman narrator used when she spoke. It was so unnatural and awkward. I couldn't even focus on what she was saying. The man was perfect. If they got another woman to re-do her part the book would be great. I'm still listening but I almost want to skip the chapters she reads even if I miss part of the story.

Good Story....at least half the time

I adore Cat Porter. PERIOD. I loved Brian Pallino’s performance, but Carmen Rose...hmmmm...her accent was great, but her vocal pattern was SOOOOO distracting! I’m sorry, but the rhythm of her sentence endings distracted me a lot & I couldn’t follow a lot of the story. A lush & exciting story, with characters I engaged with throughout.

This book had so much going on. The beginning was riveting narrated by Brian Palljno. He was amazing. I just wished he did the heroine's narration too or even Alexa would have been preferred.

The female narrator was soooo hard to listen too,. Sadly, I had to tune out her parts out to get through to the story.

My book reviews generally consist of my feelings and observations while reading, so for your consideration: this feels like a Scorsese film, so cinematic. Suspense/pot boiler, betrayal, such a balance of dark and light, family destruction and re-connection. Chicago to Greece to London, dream itinerary! Yachts, why don’t I know someone with a yacht? Swanky parties with celebs and hotshots. Beaches, mythology and legends. Such lush details, sometimes feels like a slow, sensual stroll down a cobbled street at twilight. Revenge and twisty reveals. Food, I need Greek food right now! Oh, delicious slow-burn seduction! Turo’s kisses, is there anyone who kisses better than Turo? Unexpected love, rising from two rocky pasts.
To say I enjoyed this is an understatement. Indulge, be captivated!
These narrators killed it, each character so well played. So, so good.

I kept passing this story because it was too long to listen. However, I chose this because of Carmen Rose. I've listened to her in Hate to Love You. I love her English accent and she didn't disappoint me. I couldn't stop listening. Male narrator was great too but I chose this because of miss Rose. This is my first time for this author and I'm sure it won't be my last. It is not your typical romance but it was soo good. The story kept me wanting more. BRAVO to the author! The narrators was a BIG plus. I highly recommend!

I don’t know about the few mildly lukewarm reviews, this story was
Fantabulous! I cried so often because I was moved. It was very long
but such a great story whenever I got back to it it never missed a step.
I almost didn’t buy this audiobook because of some of the reviews.
So glad I did on the strength of the love of all the other Cat Porter books. Now she needs to write “me” some more books!