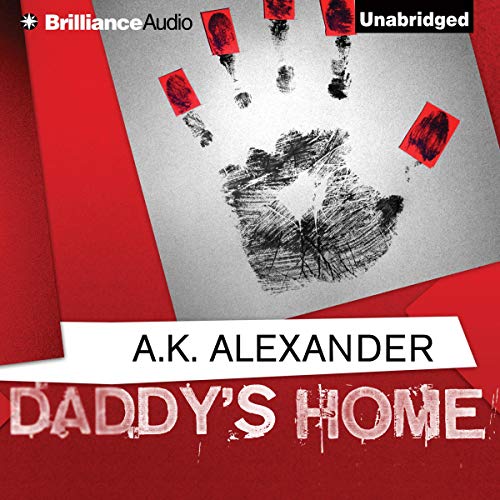 By: A. K. Alexander
Narrated by: Angela Dawe

A killer is roaming the streets of San Diego, preying on single mothers and their children with a depravity that few in the police department have ever seen. He’s hunting for the perfect family...and judging by the trail of bodies he’s left scattered across the city, this particular daddy is very hard to please.

For Detective Holly Jennings, the search for the Family Man killer just got personal. Not only is she a single mother struggling, after the death of her husband, to raise her daughter, but now Holly’s friend and her daughter have become the Family Man’s latest victims. Determined to stop him once and for all, Holly delves deep into the investigation, combing through evidence for clues to his identity. But the closer she gets to the truth, the further she must venture down his dark, twisted path, until she is forced to decide just how high a price she’s willing to pay for justice.

This was awful. I tried to persist, but couldn't. Very, very amateurish and annoying!

I guess I disagree with most of the audio reviewers. First you have the police investigation of a man who is going around killing single mothers and their children because they turned out not to be the killer's perfect family. Second you have the developing relationship between Brandon and Holly.

Holly is a single mother and a CSI investigator. Her husband was killed around the time she found out she was pregnant. She's having a hard time letting him go until Brandon, a vet, comes into the picture.raising two girls of his own alone.

The story switches back and forth between Holly's viewpoint and the killer's viewpoint. Some of the crimes were pretty brutal and some of the women who were killed had interesting secret lives. It's not so much a whodunit since you find out who the killer is fairly early but it's more of the journey to the final showdown, with a few surprises thrown in.

The narrator does have room for improvement but wasn't that much of a distraction from the story.

i find it difficult to fathom that this book ever made it to being published. the characters and dialogue are atrocious and the only kudos i can offer this author is the unique ability to include every cliche turn of phrase in one book! the plot, such as it is, leaves much to be desired and is quite clearly an amateurish attempt at a suspense. add to that the absolutely excruciating narration (think every elementary school play you've ever seen) and you have what may very well be the worst book i have ever read!!

The first thing I noticed was the narrator. She delivers the story with all the emotion of a weather reporter, apparently trying to shout over the sound of the rain. Then I noticed the banal conversations between characters, the rote police jargon, the cliché so pervasive it seems almost deliberate. The story did not flow so much as it was excreted in chunks, kind of like a comic book. The language was of a sophistication also appropriate to the comic book. ''that monster kills children, I'll get him if it''s the last thing I ever do." or " Will I ever be able to love again?''

Ever read a book and wonder how it ever got published? The mistake was compounded when some decided to make this an audio book. I thought that if i could get used to the terrible narration, I might find some redeeming qualities in the story. I'm sorry to say I found none. After two hours, I switched to another book I had on my Ipod, Hold tight by Harlan Coben. Scott brick is not my favourite narrator, But he is a professional, and the difference between this, and what I had just turned off was like a splash of cold water in the face.In short, this thing plods along with all the grace of a drunk monkey, and I hope this review will save somebody a hangover.

Good narration. Keeps you ln your toes looking forward to each chapter. i would recommend it.

I love this author. the narrator? not so much

someone really needs to test these narrators out before offering contracts. Angela Dawe has one narrative voice. Oh! My! god! the! world! is! ending!. please audible... stop destroying good books with horrible narrators!

Great buy and listen. If this is the start of a series, great, bring more on. This book had character development and such room for more stories/series as long as Ms Dawe reads them.

Our Veterinarian, Brendon. He brings Irish sweetness to the story. Chad, a loyal partner with a deep secret. Ms Dawe does justice to these two characters.

I am a big fan of Ms Dawe. Her male and children voices are great. She is at her best at Irish or Scottish brogue. See Julie Garwood's Sweet Talk, Tiffany Snow series, yum, and all of the Nora Roberts MacGregor series.

yes, as it was fast paced, and well edit.
Note: listen at new 1.25x speed to get the impact of author.

Would you try another book from A. K. Alexander and/or Angela Dawe?

Depends on the narrator

Would you recommend Daddy's Home to your friends? Why or why not?

It is a good book. The narrator makes it slow and boring.

The narrator is just reading sentence after sentence. I had to stop listening, It was driving me crazy. VERY ANNOYING!! HER VOICE DOESN'T EVEN CHANGE. SENTENCE AFTER SENTENCE.

It was an OK book.

If you’ve listened to books by A. K. Alexander before, how does this one compare?

This was my first and probably my last, I dont get why make the main character so weak.

Who would you have cast as narrator instead of Angela Dawe?

This woman's voice, OMG horrible.. the only time I liked her was when she did the little girl's voice, everything else YUCK!

Did Daddy's Home inspire you to do anything?

not to listen to another book narrated by Angela Dawe.

Could not get past the narration. Gave up after two hours. Even the story line could not keep me interested.