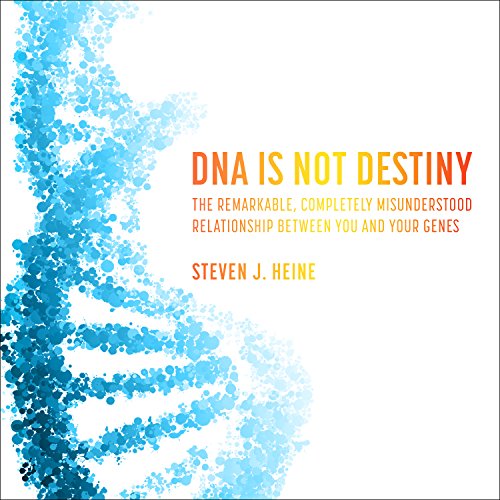 DNA Is Not Destiny

Around 250,000 people have had their genomes sequenced, and scientists expect that number to rise to one billion by 2025. Professor Steven J. Heine argues that the first thing we will do on receiving our DNA test results is to misinterpret them completely. Despite breathless (often lightly researched) media coverage about newly discovered "cancer" or "divorce" or "IQ" genes, the prospect of a DNA test forecasting how your life is going to turn out is vanishingly small.

In DNA Is Not Destiny, Heine shares his research - and his own genome sequencing results - to not only show what your genes can actually tell you about your health, intelligence, ethnic identity, and family, but also highlight the psychological biases that make us so vulnerable to the media hype. Heine's fresh, surprising conclusions about the promise, and limits, of genetic engineering and DNA testing upend conventional thinking and reveal a simple, profound truth: your genes create life - but they do not control it.

What listeners say about DNA Is Not Destiny

Anyone wanting to arm themselves with a thorough understanding of the actual influence of Genetics should read this book. I was impressed with the author's clear explanation of both how the genome works and more enthusiastically how society's thinking of Genetics often paint a poor and inaccurate picture of the reality. I was also quite intrigued by the subtle yet undeniable connection between most people's Essentialist thinking and the world's dangerous experiment with Eugenics a century ago. The following is one of many quotes that help with perspective. "Genes aren't for (causing) anything at all. Even the HTT Gene with its very strong association with Huntington's disease is not for causing Huntington's. Calling the HTT Gene the Huntington's Gene is like answering the question 'What are prostates for? They're for getting prostate cancer!'"

Understanding and Moderating the Hype of Genetics

What made the experience of listening to DNA Is Not Destiny the most enjoyable?

The science was quickly explained and I felt no need to remember the long names nor their mnemonics to make sense of the history, present status, false claims, hype, fear, and hope for the study of genetics and what the future might hold.

I think the author did a great job of explaining the history and exploring the marketplace of companies that offer, for a price, to explore and evaluate your DNA. The examples he gave of people that were surprised by what they found out, or acted out of fear on the results based on a company's less than fully creditable information (educated guesses in some instances) was well told.

What does Stephen R. Thorne bring to the story that you wouldn’t experience if you just read the book?

He sounds like he was the author and I enjoyed the story telling aspects of it and his delivery on the many jokes or tales he relates to make his points. One example is bringing Elvis Presley's DNA into the story, and the misinterpretation thereof, which was hilarious.

The Power of the Genome -- be very careful what you think you understand and what you might relay to others.

Very seldom will I suggest to a vast audience anything I've read, but this will be the first time. Why? Because it's such an interesting and futuristic subject. Secondly there's so much false info flying around on genetics that this book might hopefully prevent people from forming a bias one way or the other based on one study, one report, one rumor they heard.

What could Steven J. Heine have done to make this a more enjoyable book for you?

The question of just how much of one's destiny is determined by the DNA is an important issue. The results of those determinations are largely Social & Psychological- and Heine does a nice job of describing the idea of an "Essence. "
But, he shows his psychological base in his frequent misunderstanding of some subtleties of genetics and statistics. He ends not explaining but rather defending his views on several "PC" topics- race, homosexuality, GMOs. It is here he demonstrates his lack of grasp of the important points that would have been made by a geneticist or statistician, or even a biologist. This is not a small point, in fact it makes the utility of several points of his work as light weight or useless.

As a lefty-liberal but science guy I was deeply disappointed that this work did not make a good argument for his conclusions.

As a budding biologist and geneticist in an era of growing biotechnology and gene editing, I am thouroughly interested in the ethics and struggles of genomic sequencing and gene editing of this day and age. Epigenetics is a new field that requires extensive research, and it is beginning to dawn on scientists that, as Steven Heine so eloquently puts it, DNA is Not Destiny. This book is an eye opener, and easy to understand for those who have little to no background in biology or genetics. It reveals how much more research in the field of genetics needs to be done, and it reveals that (surprisingly) we are more than the some of our genes.

I have listened to the book twice now and I will again sometime. lots of good info well written.

I learned a lot from this good and unique book. Switch thinking, genetic essentialism, fatalism, determinism...all concepts that could be explained with much better economy. Author repeats himself in several places throughout book. Cliff notes are in order for anyone not wanting to invest 10+ hours to read.