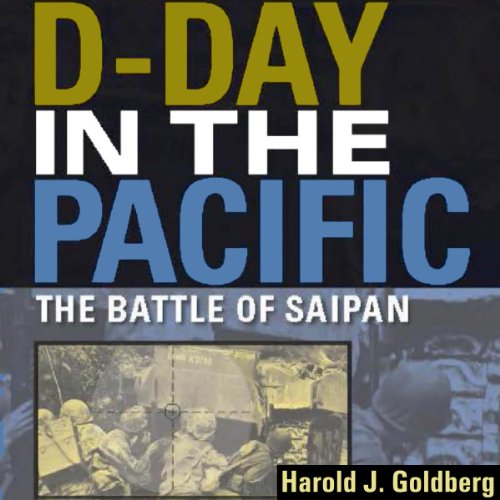 D-Day in the Pacific

Until this battle, the Japanese continued to believe that success remained a possibility. While Japan had suffered serious setbacks as early as the Battle of Midway in 1942, Saipan was part of its inner defense line, and victory was essential. Thus, the American victory at Saipan forced Japan to begin considering the possibility of defeat. For the Americans, the capture of Saipan meant secure air bases for the new B-29s - now within striking distance of Japanese cities, including Tokyo.

"Using recent interviews he conducted with extant US veterans, Goldberg skillfully develops the soldiers' view of the battle for Saipan in an engaging, clearly written and interesting volume that should be recommended to all students studying the Pacific war." ( The Journal of Military History)
"The bloody seizure of Saipan by US amphibious forces in 1944 spelled certain doom for Imperial Japan. Harold Goldberg's riveting story of this conflict brings the dead back to life by blending rigorous research with dramatic narratives by hundreds of survivors. He has written a superb account of a pivotal, little-known, and heart-breaking battle." (Col. Joseph H. Alexander, USMC (ret.), author of Storm Landings: Epic Amphibious Battles in the Central Pacific)

What listeners say about D-Day in the Pacific

What would have made D-Day in the Pacific better?

The book was written in a way that made it seem like an amateur pulled together some notes on a battle he took part in. The author seemed to have a grudge against Howlin Mad Smith and perhaps that is justified. But the author spent too much time on this fact and not enough giving context to the actions of the heroes on the field.

Has D-Day in the Pacific turned you off from other books in this genre?

Would you be willing to try another one of Gary D. MacFadden’s performances?

No - - there is no excuse for not knowing how to pronounce nautical terms like boatswain's mate - - it is pronounced BO-sun - not Boat Swane. Islands in several island chains were also mis-pronounced. The author also seemed like he was just reading the book (for the first time) - part of this was due to the way it was written, but some of it was just a bad performance.

If you could play editor, what scene or scenes would you have cut from D-Day in the Pacific?

I WOULD HAVE SPENT LESS TIME ON THE INDICTMENT OF GENERAL H.M. SMITH

I lived on Saipan for two years and some of the places are known to me. I have read or listened to a number of books on the invasion and the subsequent campaign. This is a mostly well-researched book with additional information and I really do appreciate it. It does perpetuate mistakes that appear in other books on the subject. The narrator was a bit boring but his mispronunciations detracted from the enjoyment. He, along with other audio books, continues to mispronounce "Chalan Kanoa" as "Charan Kanoa" follows a pattern that could have been avoided if the various authors had just glanced at the USGS map of Saipan. I suspect that this may stem from an interpretation of the Japanese pronunciation. He butchers other Chamorro words but even some place names in Hawaii- "Show-field Barracks" instead of "Sko-field Barracks." I also wish the author had mentioned the defoliant effect napalm had on the attack approaches to Death Valley and Purple Heart Valley that made the attacks very costly.

Great history!!!! What those men went through

UNIMAGINABLE COURAGE IN THE FACE OF A DETERMINED ENEMY....I COULD NOT DO WHAT THEY DID

Extraordinary Insight The Battle of Saipan

Very good coverage of the battle of Saipan

This is a very good account of the battle. There is a lot of background information on the saipan and the events leading up to the invasion. Would help anyone who is looking for information about World War 2