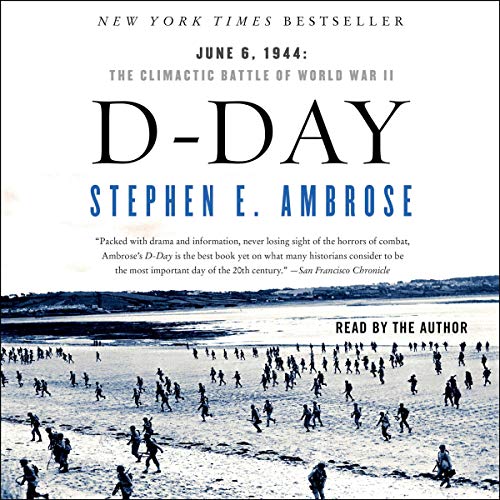 When Hitler declared war on the United States, he bet that the young men brought up in the Hitler Youth would outfight the youngsters brought up in the Boy Scouts. Now, in this magnificent retelling of the war's most climactic battle, acclaimed Eisenhower biographer and World War II historian Stephen E. Ambrose tells how wrong Hitler was. Drawing on hundreds of oral histories as well as never-before-available information from around the world, Ambrose tells the true story of how the Allies broke through Hitler's Atlantic Wall, revealing that the intricate plan for the invasion had to be abandoned before the first shot was fired. Focusing on the 24 hours of June 6, 1944 - D-Day brings to life the stories of the men and women who made history - from top Allied and Axis strategic commanders to the citizen soldiers whose heroic initiative saved the day.

What listeners say about D-Day

a MUST 'read' if you're visiting Normandy

We listened to this on our trip to the D-Day sights of Normandy this summer and it made the trip really come alive. There is a small amount of swearing and my 10 year old probably only caught snippits, but it really makes you want to visit the sites, like Pegasus Bridge and Point-le-Hoc, armed with a powerful sense of what happened there. Stephen Ambrose makes a fantastic tour-guide!