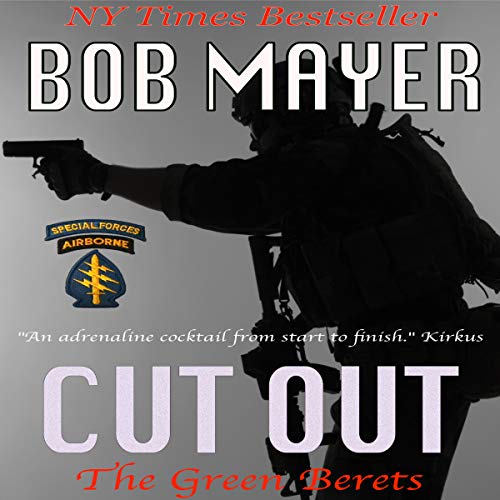 New York Times best-selling author and former Green Beret Bob Mayer brings back Chief Warrant Officer and Green Beret Dave Riley (Eyes of the Hammer, Dragon Sim-13) in a thriller set in the shrouded, secret world of the federal witness protection program, where he discovers once again that no one can be trusted and the stakes are life itself.

Publishers Weekly reference Cut Out: "Well-paced with a maximum quotient of action and violence, this entry should appeal to fans of the series."

When Philip Cobb, former mob money launderer and current government informer, is murdered just as he is about the enter the Program, his wife, after calling an emergency Program number only to be nearly gunned down herself, turns for help to her brother, who contacts his old girlfriend, Donna Giannini, now a Chicago cop. Giannini (who appeared in SYNBAT) in turn asks her old pal Riley to keep Lisa alive while she finds out what went wrong. The rest of the narrative pits the warrior skills and state-of-the-art special-ops technology of Riley and his men against two groups of professional killers and the heinous federal officials behind one of them.

What listeners say about Cut Out

Better than the last book

Cut out features characters from the last Dave Riley novel and an interesting twist on who the Bad guys are. Although it does suffer slightly from a dated technology level, no one calls them 'portable' phones anymore, the writing and plot are very good. Highly recommended for Dave Riley fans and would make a decent introduction into the series even though it relies on Characters introduced in the previous book. Performance is excellent as I have come to expect from this reader.

Better than a mob story

Dave Reilly becomes a bodyguard going up against the mob. This is one novel where you don't know what to expect next and it was a fun read from cover to cover.