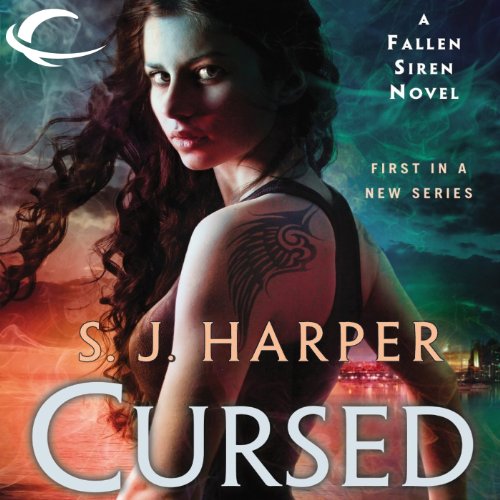 Meet FBI Agents Emma Monroe and Zack Armstrong. She's cursed. He's damned. Together, they make one hell of a team. Emma Monroe is a Siren, cursed by the gods and bound to earth to atone for an ancient failure. She’s had many names and many lives, but only one mission: redemption. Now that she works missing persons cases for the FBI, it could be just a rescue away. Unless her new partner leads her astray.

Special Agent Zack Armstrong just transferred into the San Diego Field Office. He’s a werewolf, doing his best to beat back the demons from his dark and dangerous past. As a former Black Ops sniper, he’s taken enough lives. Now he’s doing penance by saving them. Emma and Zack’s very first case draws them deep into the realm of the paranormal, and forces them to use their own supernatural abilities. But that leaves each of them vulnerable, and there are lines partners should not cross. As secrets are revealed and more women go missing, one thing becomes clear: as they race to save the victims, Emma and Zack risk losing themselves.

What listeners say about Cursed

I'll admit I purchased this book for the narrator. I love J.Parker's narration and look for any books she's done. A wonderful surprise is that this book was awesome! I loved the story, characters and narration. There's vamps, weres, etc, sexual tension, great concept for a genre that's one of my favorites and for what appears to be a series. I downloaded book 2 before I finished the first. Well worth the credit or the price. Hope it continues past book 2 and with J.Parker narration. :) I'll be following this author and this series for more.

I loved the narrator as Sookie Stackhouse and it took me a couple of chapters to forget Sookie, but once it got going, I really enjoyed her as Emma & Zack.

FBI agents Emma Monroe and Zack Armstrong are investigating a series of missing persons. The only connection seems to be the missing persons are closet vampires (the public is unaware of vampires).
Emma is a Siren and Zack is werewolf. So they have to rely on the supernatural nature to solve this crime but it is definitely a complicated case. Then throw in the fact that you have a sexy seductress with a carnal shape-shifter and sparks are flying everywhere.

I found the writing to be smooth and the story very interesting. It wasn't heavy on romance at all, but focused on the solving the crime. Emma was a likable heroine who did her best to act like a human and respect the human way of life. Zach was also likable as he tried to find his place in both the human and shifter worlds. I like how the author didn't make Book 1 overly complicated and heavy with world building. Some authors use book 1 as an information dump and it makes the book boring. I think after introducing us to characters, the authors can then use book 2 to give us more background and delve more into their past. I will definitely be continuing this series.

What did you love best about Cursed?

Yes please S. J. Harper please write more books and faster I need series for this onset and please have them be Same quality.

From the first few moments of the book, I was completely captured. The story line will pique your curiosity and make it difficult to put the book down. I had this book on my wish list for a while, thinking the story would be like all the other paranormal romance novels. Fortunately the story line is part mystery, intrigue and crime show sandwiched between Greek mythology and love story. I managed to finish the book in 2 days, while working full time! I liked the speed with with the reader spoke, while I almost always listen at 1.25, I was able to enjoy this book at 1!

Captured My Attention from the Beginning

I loved this book. I would recommend reading Captured the prequel to this book before this one because it will make it easier for you to follow the story line. I do believe that even if you don't the story line will capture your attention from the beginning and will not let it go to the very end. I have fallen head first for the characters in this series (especially Emma & Zack)and the world they have been written into. Definitely moving onto Reckoning book #2 in the Fallen Siren series.

I definitely enjoyed Johanna Parker's narration of this book. She did a fantastic job of it.

Great start to a promising series

What a great read. I went in expecting an interesting Urban Fantasy, but it was so much more. There is a great police procedural story, a smexy romance and intriguing threads left to be tied!! I can see this being an addictive series!!

Emma is a Siren, yup from Mythology, that was a really awesome aspect. I have always had a thing for Mythology since my teens. This series mixes deities, vampires, witches, werewolves and other paranormals into modern times. There is some really fantastic world building, although much is left open to be explored in the rest of the series.

I really love Emma's whole attitude and sass! She is a terrific character who is well balanced by her partner Zack. Sigh, I do love the wolfie guys!! Zack feels like he is holding back his full Alpha-ness, but I expect that to change as the series progresses. The dynamic between the two is engaging, dynamic and just a touch heartbreaking.

The supporting characters are interesting and multifaceted. I really like her BFF Liz who is a witch, smexy charismatic vamp Kallistos and all the people involved in the investigation. It was a pretty straight forward case but there were a few curve-balls thrown in there to keep the reader guessing. There are also many threads that could lead to other tales in the series, ruthless Alpha wolves, power-hungry vampire princes, and of course a Goddess who hold a serious grudge! There will of course be a love triangle, because what would an UF be without one!

The book is pretty much all from Emma's POV, which isn't a bad thing, it just keeps you from knowing others true feelings until they say them. And even then they could be lying. Still she has an interesting perspective and is fun to read.

I listened to the audiobook narrated by Johanna Parker, who does a fabulous job. She has a real feel for all the characters, giving distinct and consistent voices throughout. I loved her slightly snark tone and enjoyed the pace of the read. I prefer a quicker read and she totally delivered! She was also brilliant in adding energy and emotion into key points in the narrative. I will definitely be looking for more of her reads! She gives good voice!

Overall, this was a fascinating first book in the series. It gives just enough to get you wanting more. Plenty of places to go with the next book, can't wait!!

If you're looking for a different UF heroine...

Yes. I love that the heroine is a siren, which is something different than your typical urban fantasy.

Have you listened to any of Johanna Parker’s other performances before? How does this one compare?

I haven't, but I thought she captured the tone perfectly.

I also read the prequel (CAPTURED, which isn't on Audible), and I can't wait for more of this series, especially if it's a book on tape!

This part of the siren's tale had a good story line. The character development slowed down in a few places, seemed somewhat repetitious. i felt like there was enough going on that other characters were left flat. enjoyed the story, but hope for more action and development of secondary character, including the hero sidekick.

This starts off strong. The characters are enjoyable. Then midway the plot seems to fragment and pull apart. The supporting characters lightly mentioned suddenly have large parts that seem to be put into the story as fillers. Then they are given small parts with statements or actions to drop them out of site again. With this the story becomes utterly predictable with sex added to help fill up space. The utter predictability detracted from the overall story appeal. It has me hesitant about purchasing future books in this series. I did enjoy Johanna Parker narration of this book. She does an excellent job. Her reading kept the book enjoyable.

What disappointed you about Cursed?

The premise is good, but the plot seems a little forced in places and super transparent in others. I can tell a lot of research went into the greek aspect.

Would you ever listen to anything by S. J. Harper again?

I didn't dislike the book, just wasn't captivated by it.

I usually love her narration, but in this case she has missed the mark with the characters who supposedly grew up on Hilton Head Island, South Carolina. No one who hails from here sounds like the stereotypical southern hick drawl she is portraying them as, and for me that kept taking me out of the story.

If I knew the book had characters from my hometown I would have read the book instead of listened.