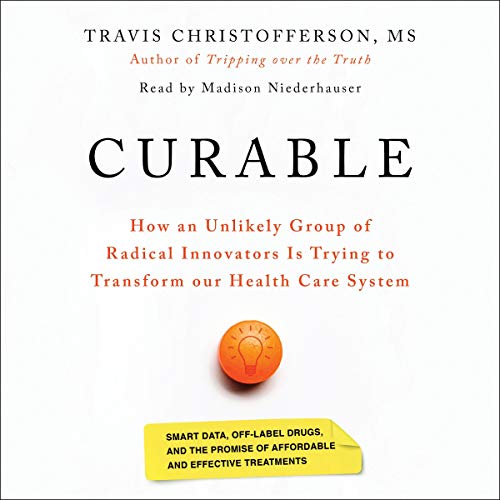 The United States is fast becoming the sickest nation in the Western world. Cancer rates continue to rise. There is an epidemic of chronic disease in children. Even with all the money and modern innovations in science, the country’s health care system is beyond broken. Clearly there is a glitch in the system. But what if the solution has been here all along, and we’ve just been too blind to see it?

In Curable journalist and health care advocate Travis Christofferson looks at medicine through a magnifying glass and asks an important question: What if the roots of the current US health care crisis are psychological and systemic, perpetuated not just by corporate influence and the powers that be, but by you and me? An enthralling inquiry into a “moneyball approach to medicine”, Curable explores the links between revolutionary baseball analytics; Nobel Prize-winning psychological research on confirmation bias; wildly successful maverick economic philosophy; the history of the radical mastectomy and the rise of the clinical trial; cutting-edge treatments routinely overlooked by regulatory bodies; and outdated medical models that prioritize profit over prevention.

How do we fix it? First we must reframe the conflict between doctors’ intuition and statistical data. Then we must design better systems that can support doctors who are increasingly overwhelmed with the complexity of modern medicine.

Curable outlines the future of medicine, detailing brilliant examples of new health care systems that prove we can do better. It turns out we have more control over our health (and happiness) than we think.

What listeners say about Curable

I wanted to like this book but first off, the narrator is BRUTAL. monotone as a robot. As for the substance of the book, it was a hodgepodge of ideas strung together. Usually somewhat unrelated. It was a call for a change to the healthcare system, but could of been done in a 250 word article. Another book for the sake of another book. I like Travis, but this was a tough one to get through. The theme was good, but just did not need all the extra fluff to get there.

This book gives me hope. I could not put it down. Thought provoking. Narration was fabulous.

I loved the entire book. I couldn't stop listening. I hope the greed of America stops pulling people apart so people stop being lonely. community needs to return so people can connect with one another again.

Excellent insights into US Healthcare

The amount of research that went into putting this book together must have been tremendous. Travis is a very good technical writer and seems to have an excellent grasp of current health care issues. He puts forth some interesting and though provoking ideas of how to work for change. I have a different prospective on several issues after reading this book. I hope you enjoy the book as much as I did.

Two thumbs up. Great examples. Totally worth the time, I think. I highly recommend the time investment.

A must read for those in trenches treating patients.

Medicine is an art that can be aided by accurate record keeping of what works. Big pharma should not be advertising to patients directly and tying hands of doctors turning them into pill pushers influenced by evidenced based care. Chronic illness and obesity winning the battle. Need lifestyle medicine and people need to take responsibility for their eating and exercise habits. Ins companies need to be removed , we need a universal fee schedule like Medicare has , and we need to end wasteful end of life care especially drugs for cancer patients that give people a few more months . They will bankrupt Medicare quicker than the aging population . Should only be used for those who can pay personally not used across the board like big pharma wants. Dr Q