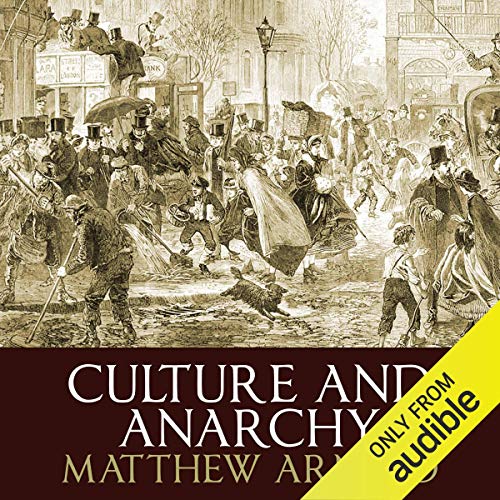 Matthew Arnold’s essays compiled in Culture and Anarchy present an idyllic view of culture as the sum total of a society’s intellect and proactive accomplishments shared by all of its inhabitants. He then details the forces that pull a society toward this vision of culture or, conversely, toward anarchy. British actor Michael Maloney performs the essays, capturing Arnold’s tone of reprimand mixed with positivism. Maloney’s enthusiasm for the subject gives the listener the impression of Arnold, noted conversationalist, chatting up a room, lecturing on some of his impassioned views on the world he lived in, which still feel relevant today.

Culture and Anarchy is a series of periodical essays by Matthew Arnold, first published in Cornhill Magazine 1867-68 and collected as a book in 1869.

Arnold's famous piece of writing on culture established his High Victorian cultural agenda which remained dominant in debate from the 1860s until the 1950s. According to his view advanced in the audiobook, ‘Culture [...] is a study of perfection’. He further wrote that: ‘[Culture] seeks to do away with classes; to make the best that has been thought and known in the world current everywhere; to make all men live in an atmosphere of sweetness and light [...].’ His often quoted phrase ‘[culture is] the best which has been thought and said’ comes from the Preface to Culture and Anarchy.

Matthew Arnold (24 December 1822 – 15 April 1888) was a British poet and cultural critic who worked as an inspector of schools. He was the son of Thomas Arnold, the famed headmaster of Rugby School, and brother to both Tom Arnold, literary professor, and William Delafield Arnold, novelist and colonial administrator. Matthew Arnold has been characterized as a sage writer, a type of writer who chastises and instructs the reader on contemporary social issues.

What listeners say about Culture and Anarchy

Much more interesting than I thought it would be

I didn’t expect much from the book, thinking it was just something I should know by more than reputation. My impression had been that Arnold was a stuffy old Victorian with idealistic notions about the elevating role of ‘culture’. I think that impression has probably formed in relation to *uses* to which Arnold was put in the twentieth century. In fact, his concerns are surprisingly contemporary. How to respond to a political situation in which positions have become strongly polarised and in which parties are so convinced of their ‘rightness’ that they have lost the capacity for critical self-reflection? ‘Culture’ is really the name that Arnold gives to a practice of self-reflection that dissolves dogma and encourages ideas of a broader ‘common good’. It is of course also of its time, but that central argument might well be worth revisiting.

A great performance. The narrator brings Arnold's preaching style to life. Better than reading the book!

Generally, i like this genre. A good narrator might have saved it. Where does audible find these narrators? Seems to be occurring much more frequently

Luscious language. Engaging narration. How our culture can help us thrive. How it can stunt our development. An under appreciated gem of a meditation much needed by us today.