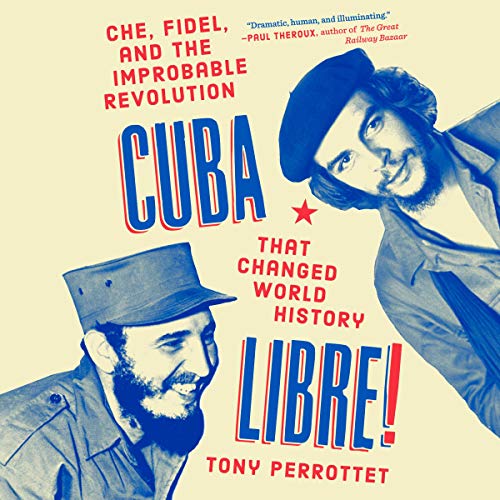 The surprising story of Che Guevara, Fidel Castro, and the scrappy band of rebel men and women who followed them.

Most people are familiar with the basics of the Cuban Revolution of 1956-1959: it was led by two of the 20th century’s most charismatic figures, Fidel Castro and Che Guevara; it successfully overthrew the island nation’s US-backed dictator; and it quickly went awry under Fidel's rule.

But less is remembered about the amateur nature of the movement or the lives of its players. In this wildly entertaining and meticulously researched account, historian and journalist Tony Perrottet unravels the human drama behind history’s most improbable revolution: a scruffy handful of self-taught revolutionaries - many of them kids just out of college, literature majors, and art students, and including a number of extraordinary women - who defeated 40,000 professional soldiers to overthrow the dictatorship of Fulgencio Batista.

Cuba Libre!’s deep dive into the revolution reveals fascinating details: How did Fidel’s highly organized lover Celia Sánchez whip the male guerrillas into shape? Who were the two dozen American volunteers who joined the Cuban rebels? How do you make lethal land mines from condensed milk cans - or, for that matter, cook chorizo à la guerrilla (sausage guerrilla-style)?

Cuba Libre! is an absorbing look back at a liberation movement that captured the world's imagination with its spectacular drama, foolhardy bravery, tragedy, and, sometimes, high comedy - and that set the stage for Cold War tensions that pushed the world to the brink of nuclear war.

"An excellent new entry on the subject, with a memorable opening line and highly enjoyable chapters. If you read only one recent book on Cuba, have it be this delightful popular history." (Library Journal, starred)

“Perrottet’s history excels in putting a human face on the fighters...the revolution’s real stars were the smart and strong women who acted as spies, couriers, logistical experts, and ultimately as the bravest, fiercest, and most indispensable combatants.” (Booklist)

"A juicy jungle opera.... Fascinating...[Perrottet's] lively, gossipy account steps back and allows the characters to speak for themselves.... Humor abounds throughout the book, too." (Los Angeles Review of Books)

What listeners say about Cuba Libre!

Robertson Dean has a hell of a voice. I really enjoy detailed slice of life history books. This one mainly covers a 4 year stretch of Cuban history. I wish it would've covered Fidel's tenure as Prime Minister more but still a fantastic journey.

I started to think the author crafted a story which mirrored the evolution of the Cuban revolution, a meta-story of comical ineptness growing into something more consequential. The first half of the book is strewn with odd pop culture references, mostly comedic, with only scant relevance to the stories at hand. The Keystone Cops, Three Stooges, Marx Brothers, Woody Allen, Monty Python, Laurel and Hardy, and the fictional Maxwell Smart get name-checked among others. Later in the book, celebrities such as Lou Costello and Steve Allen are referenced, but at least with regard to Cuba-themed specials on American TV.

Once the book breaks free of this odd approach, it becomes terrifically informative and humanizing to its characters. Not at all a puff piece, it deals with Fidel, Che, Raul and several others honestly, giving respect when deserved and scorn when earned. All in all, it turned into a worthwhile listen.

WOW! What an awesome story

I know Fidel and Che as Cold War cliche icons but almost nothing about the Cuban Revolution itself. Perrottet sets out to retell that story afresh by puttung aside the animosity between the US and Cuba with a straight up "this is what happened" retelling without presuming to know what would transpire in the years after the revolution, and to do so with the flare of a novelist. The story is way better than I imagined. It is something of a fairy tale. The literary aspect is not by accident as Fidel and his group were college educated urbane middle-class romantics, they were reading books by Emile Zola, Edward Gibbon and Cervantes while building tree forts in the jungle. How they went from 20 unlikely guys (and a few women) in the remotest mountains who forgot to bring shaving razors, to conquering the island (and the attention of the world) is the stuff of legend. It is a wonderfully fun and upbeat story. Don't worry about the ideology, communism doesn't even enter the story until after the revolution. Read it for entertainment, for education, this is one great tale with clear good and bad guys, overcoming improbable odds, fame and fortune, humor and drama set in an exotic land of pristine jungle mountains, mafioso casinos, coffee farmers, feudal landlords, and a cast of colorful people. What a delightful way to learn about Cuba as everything comes back this moment and nothing afterwards can be understood without it.

Deep look into an interesting time

Fascinating story, couldn't stop listening until it was complete. Hearing all of the details of the revolution was eye opening.

This is an incredible book - i don't have enough superlatives to describe it. Tense, moving and often funny, this is a clearly painstakingly researched book which provides detailed context and fascinating details on the Cuban revolution. filled with facts I've never heard before, this would be the best adventure novel I'd ever consumed if it wasn't for the remarkable fact this is non-fiction. The narration is a joy to listen to; calm and perfectly placed. No hyperbole - i felt like I was walking on air at points whilst I listened to this. I particularly loved the insights into Fidel Cadtro's often ludicrous optimism, and the rarely told exploits of the supporting cast - the little cowboy, the gringo commandante, the all-woman column. Finally, it is a wonderful thing to hear Celia Sanchez get the credit she is due for helping to change the world forever.

Usually war books are boring, even for those who love the subject, this book is very engaging.

Would recommend to anyone.