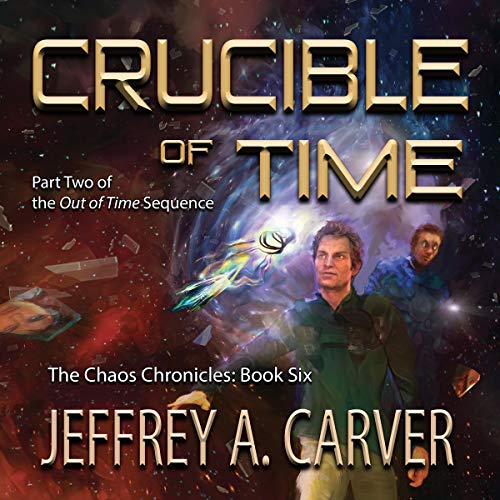 By: Jeffrey A. Carver
Narrated by: Stefan Rudnicki

A galaxy in peril...

The story begun in The Reefs of Time continues. The time-tides caused by Karellia’s defenses have brought the malicious Mindaru AI out of the deep past into the present, threatening Bandicut and Li-Jared, who have arrived at the backwater planet - Li-Jared’s homeworld - to find it on the brink of interplanetary war. Somehow they must forge a peace between Karellia and its neighboring world if the Mindaru threat is to be broken.

Back on Shipworld, Ik and Julie Stone risk their lives a second time to stop the Mindaru at their source: a planet near the galactic core, a billion years in the past. Can Antares, the beautiful humanoid who also loves Bandicut, help them? What of Bria the gokat? And Amaduse, the most influential librarian in Shipworld?

And in the deep time of the galaxy’s early history, by the light of a million suns, the Mindaru do hideous things to an innocent species. The Mindaru plan for the altered creatures bears momentous possibilities even the deadly AI cannot predict.

Time is critical. Time is elastic. And time is running out.

Conclusion of the unmissable two-part Out of Time sequence begun in The Reefs of Time, from Jeffrey A. Carver, Nebula-nominated author of Eternity's End.

Praise for The Reefs of Time/Crucible of Time:

“Jeffrey A. Carver’s remarkable long-awaited duology The Reefs of Time/Crucible of Time is a welcome addition to The Chaos Chronicles, certifying his continuing mastery of action and adventure at the boundaries of space opera and hard SF.” (Steve Miller, coauthor of The Liaden Universe)

What listeners say about Crucible of Time