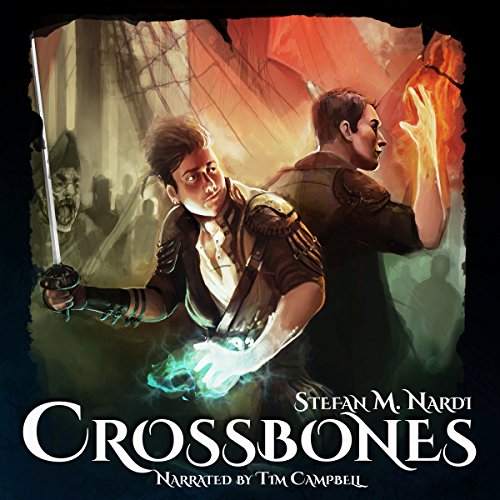 *A world on the brink of war. A quest for vengeance. A secret that could change everything.*

Dean and Eldric Whittaker have never known their parents. Orphaned in a pirate attack on their village, they were raised by the mysterious wizard Rorschach. The only clue to their heritage, their strange abilities to control the power of fire and ice.

Harboring a hate for the pirate lords and a thirst for revenge, the brothers set out on their own voyage to hunt down and kill the man who murdered their parents. But in a world inhabited by monsters and ruled by men with the power of gods, can they survive long enough to achieve their goal?

Crossbones is the first installment in a series of swashbuckling fantasy novels.

What listeners say about Crossbones

I loved that this was a fast paced action adventure with pirates, magic and swords. Can't wait for the next book

This is the first in a series to feature Dean and Eldric Whittaker, half-brothers who have mystical powers over ice and fire. There is plenty of action to keep the reader interested, and the characters are given a chance to develop over the length of this episode.

I received a review copy courtesy of Audiobook boom

Crossbones is an interesting pirate and magic themed novel. I easily finished this book in one sitting. This book is an action packed adventure from the beginning to the end with great fight scenes throughout the book. The author did a great job introducing and building the main characters, and I found them easily relatable. Unfortunately, I didn’t know that this book is the first in a new series when I started listening to it, so it leaves a lot of unanswered questions. The narrator did an ok job, but at times it was difficult for me to distinguish which character would be speaking. There were some other characters that he voiced where he did a great job, and brought a lot of life to them. Overall, this book is worth a listen and I look forward to listening to book two.

This audiobook was provided by the author, narrator, or publisher at no cost in exchange for an unbiased review courtesy of AudiobookBoom dot com
.

Glad This is a Series

I was given this book for an unbiased review via audiobook boom. I am glad this is a series. Perhaps more will be revealed about what came before and the author will go back and make a few transitional things happen. Not sure about the book but perhaps I will come back and listen again since it is so short. I try to provide reviews that will help not only the reader but the author as well. This book needs a little fine tuning.

I would because this is an interesting cross of different genres. This was a little slow starting, but then it picked up and the pacing was great, and there is a lot of action.

Have you listened to any of Tim Campbell’s other performances before? How does this one compare?

This was my first book by him, but he did a great job. I thought his pace was excellent.

I did listen to it straight through at work. My only real compliant is that it was too short! I am ready for the next episode.

This is a light fantasy novel with little depth to the characters. I still enjoyed this book quite a bit. I look forward to next in the series. I like the narrator's performance. I received this audiobook for free through Audiobook Boom for my unbiased review.

This book is short but interesting. You never get a full picture of what's going on in the world but get enough to keep you in their world of magic and Fae. There's mages, demons, Fae and war what more can one ask for. Though I hope the next book is longer I do look forward to hearing it.

I received the book free in return for a unbiased review. Thanks.

A tale fitting to be besides terry brooks shannara series. Swords sorcery companions inherent magic of the fae. A well writtten well read story. The characters are great and the characters are easy to connect with. I enjoyed and will be watching for more in the series.

This was an interesting mix of two genres was don't usually see together: Pirates and Magic. Initially unsure if I would like it, I actually thought it blended very well with a good story and decent plot. My biggest complaint is that it was so short... I really would have liked to listen to a longer book... The narrator did a decent job, but I found a few of the characters voices to be a bit off, so I'm only giving 4 stars. I requested and received a free copy of this audiobook from the author, publisher, or narrator in exchange for an unbiased review. I was NOT required to write a positive review and this reflects my honest opinion of the work.

This book gets off to an action pack exciting start and doesn't stop until the very end.

The author has written a well developed story line as in addition to many likable characters.

The story is a thrilling ride, with lost family members, a bit of romance, and a few twists and

turns at the end.


Tim Campbell did an excellent job with the narration as usual.

Great book, look forward to the rest of the series.

This review copy audiobook was provided by the author, narrator, or publisher at no cost.