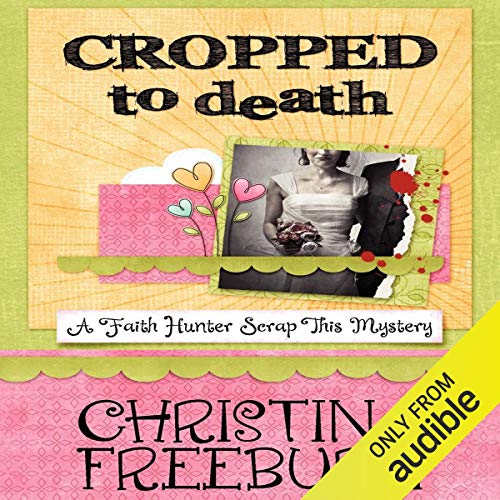 Former US Army JAG specialist, Faith Hunter, returns to her West Virginia home to work in her grandmothers' scrapbooking store determined to lead an unassuming life after her adventure abroad turned disaster. But her quiet life unravels when her friend is charged with murder, and Faith inadvertently supplied the evidence. So Faith decides to cut through the scrap and piece together what really happened. With a sexy prosecutor, a determined homicide detective, a handful of sticky suspects and a crop contest gone bad, Faith quickly realizes if she's not careful, she'll be the next one cropped.

What listeners say about Cropped to Death

Would you consider the audio edition of Cropped to Death to be better than the print version?

Yes! The narrator is excellent. I listened to the book during my daily commute. It was a wonderful escape from the stress of everyday life.

I adore Faith's Grandmothers. They are caring and funny. They were a true highlight of the book.

What does Tara Ochs bring to the story that you wouldn’t experience if you just read the book?

She has a wonderful accent that fits into the story perfectly. The book is set in West Virginia. Tara really brings the characters to life.

I laughed out loud several times.

As Cropped to Death by Christina Freebum opens, Faith Hunter stands at her family's scrapbooking shop and watches as fellow employee Marilyn crops her husband's face out of all of her photos. The cheater, Michael, is having a baby with his girlfriend. But then that night, Marilyn says that Michael denied the baby is his and wants to pursue counseling. In horror, Faith and her two grandmothers, Shirley and Hope, try to talk Marilyn out of such a plan, but Marilyn stays resolute. At least, she does until the next day, when, walking with Faith to the store's booth at the local art fair, Marilyn sees Michael walking with his very visibly pregnant girlfriend, Annette. With shouts of "I'll kill him!", Marilyn has just sealed her arrest when Annette is found kneeling over Michael's stabbed body.

Upon her arrest, Marilyn gives Faith a serious glare for having told, although very reluctantly, about Marilyn's statement. Soon, Faith finds herself ordered by Marilyn to clear the friend, using skills Marilyn decides Faith gained while working as a clerk for JAG in the military. Feeling guilty for admitting Faith made the threat against Michael, Faith agrees to do her own investigation, leading to conflict with everyone around her.

This book was enjoyable, with a creative setting. I liked learning about scrapbooking, but the book seemed to assume that we readers knew more about the craft than I actually do. For example, the police confiscate all the scissors in the shop, but Faith points out that Marilyn never uses scissors but instead uses croppers. What are croppers? The plot has interesting twists and turns as we see Faith get even more involved in the case and making enemies of everyone around her.

The characters in this book created interest, especially the detective in the case, Ted Roget, who has a really round character. We get to know him and care about him. Freebum does an especially good job of developing Faith's character, as we get just enough glimpses of her painful past to keep us listening and drawn to the story. This makes us understand her and her motivations with more compassion. The book contains a love triangle between Faith and her biker/ prosecutor neighbor, Steve Davis, but I never got a real sense of Steve, and until the end, when Faith makes a mention for the second time that he is a hot biker, I completely forgot about that fact and pictures him differently, when a mental picture even arose.

Tara Ochs narrates the audiobook edition of this book. She does her part to make this book more energetic and enjoyable. I had fun listening to this book, and Ochs added to that pleasure.

I had a good time with Cropped to Death, but it wasn't my favorite book. Some characters, like Faith, were well-developed, while others, like Steve and Faith's grandmothers, fell pretty flat. The plot had strong points, but it got tiresome seeing Faith build cases against everyone around her. I give the book four stars.

I love scrapbooking and enjoy listening to books as I work. I multitask. This was not written to be great literature. It is meant to simply be cute and a fast read. It's filled with interesting characters and has the beginnings of a romance. The low rating is because parts of the book were not realistic and these things made the storyline unbelievable. No woman would carry 12x12" pages in her purse (maybe a tote) for days and not know one of them was there. And neither got wrinkled??? Not believable.

The book is a pretty good debut mystery. This one takes some turns that keeps you guessing right till the ending. Keep reading the series. It gets better with each new book.

This is a bad book

I think the narrator ruined this for me. From the beginning I was distracted by the narrator's voice. She made the lead character, Faith, sound as old as her grandmothers. However, the narrator can not be blamed for creating a lead character that was annoying and flat. Her involvement in the "investigation" was forced and beyond the scope of her disabilities. As an ex JAG administer, she should have had some scruples. Faith had none. It was just a bad book.